Bitcoin continues to bleed lower after its breakdown on September 24, now tracking beneath the 200-day moving average. Now, Bitcoin bulls are grasping for a bullish catalyst in an effort to stem the bleeding and retake the 200DMA. To their benefit, the recent deterioration in the Turkish Lira could serve to bolster the cryptocurrency – if history is any indication – but the theme has yet to take hold this time around.

As it stands, USDTRY and BTCUSD share a 20-day correlation of just 0.26, which suggests a weakening Lira spot rate has not translated to Bitcoin strength – as it has in the past. Still, the relationship remains one to watch as Bitcoin languishes beneath the 200-day moving average and threatens to form a death cross. Nevertheless, BTC still maintains a 110% return since January 1. 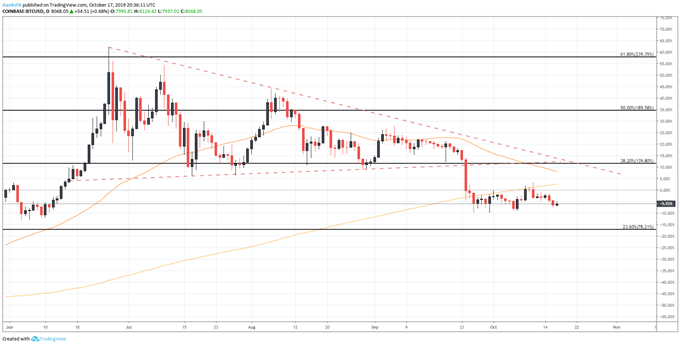 To that end, Bitcoin could suffer another break lower if a death cross does materialize. The lack of bullish momentum derived from a weakened Lira is concerning as Bitcoin lacks significant buoyancy beneath the current price. At present, it appears as though Bitcoin’s nearby support rests solely around the 23.6% Fibonacci level at $7100. Should the level prove insufficient, bears could look to drive the coin lower and further erode Bitcoin’s return in the year-to-date. As Bitcoin looks to regain its footing, follow @PeterHanksFX on Twitter for further updates and analysis.