Guidewire (GWRE) is one of the leading software providers for property and casualty (P&C) insurance, with offerings covering the entire value chain from administration to claims and billing. The company is fast moving into higher value-add offerings such as cloud and data analytics, though a significant chunk of R&D spend is being pulled forward, weighing on margins. However, the company has a strong track record and has historically delivered strong revenue growth; I see little reason for this to change going forward.

In the short-term, GWRE is set to suffer a dilution in margins, but the long-term benefits should more than outweigh the short-term investments. The company has already seen early success in its cloud offerings, with nine existing and four new customers signing up. The new CEO exudes confidence, and I do not think the company could have found a better person to lead at this stage. With shares also trading at a relative discount, GWRE screens well on both quality and growth potential.

Guidewire Software recently held its annual analyst day event, the first for new CEO Mike Rosenbaum, who joined as CEO in Aug 2019. Coming from a cloud background as a former EVP at Salesforce, the new CEO clearly stamped his experience and expectations for the company going forward. This was evident from the hyper-focus on the cloud – the company signaled a faster-than-expected ramp in cloud revenue, while retaining overall long-term revenue guidance.

The company’s short-term plan focuses on cloud efficiency, operational execution, and product innovation not just to drive FY20 numbers, but also to build a solid foundation for their long-term cloud-focused strategy. This is visible from the dramatic shift in R&D mix between FY18 and FY19 – cloud takes the largest share of R&D spend at 35%, up 10% points from 25% in FY18. 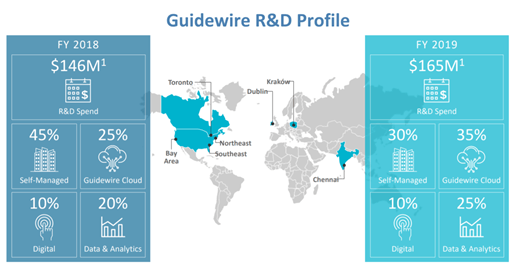 As highlighted by the company, cloud will be the key driver of the business model going forward. The license & subscription contributions to the overall mix are increasing, and with it, the contribution of subscription revenue is as well. However, it is likely going to hit Guidewire’s short to medium term numbers like a double-edged sword. The company will need to invest in indirect (SG&A) costs, along with R&D, to support this additional revenue stream. Thus, gross margins are likely to see dilution going forward.

But management is taking measures to reduce this impact over the long term. This involves streamlining people and processes using automation and best practices. Given the company’s history of delivering on aggressive targets, I think there’s a fair chance it will be able to deliver on its guided operational efficiency targets as well.

Management also firmed up its FY20 guidance, which was last shared during the quarterly results, but there was also a major change in the medium-term (FY23) forecasts. Note that at the 2018 analyst day event, the company had set an aspirational target of hitting $1.3B revenue in FY23, with license & subscription contribution of 50%. Though the overall revenue target remains unchanged, there has been a major raise in the targeted license & subscription contribution to the 57-59% range. This comes along with guidance for a major dilution in gross and operating margins as well. FY23 GM is now forecast to hit 62-64%, down from last year’s 65-67% forecast. The OM is thus, now at 22-24%, down from the 28-30% forecast last year. Clearly, additional SG&A impact is flowing to the OM in addition to the ~3% of GM dilution. 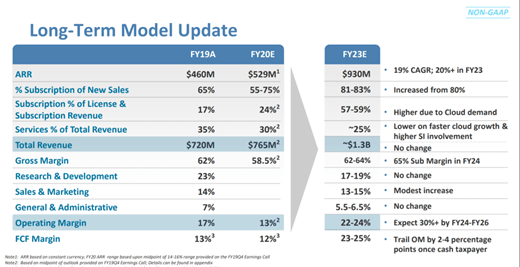 In summary, I feel the analyst day marked a shift in the company’s focus from being just a platform provider to a full cloud vendor solving P&C players’ big challenges. Cloud is certainly going to impact the financials over the medium term, but that will be more than covered by the growth upturn that the company will likely see in the FY23-FY24 period. The new CEO comes with strong pedigree, especially in the cloud, and should steer the company successfully into the cloud era. The overall management quality is very good, and thus, I expect them to deliver on their new vision.

There are quite a few private companies that provide products and services highly similar to Guidewire in the Insurance sector. But there aren’t any exact publicly listed companies. So, for the purpose of relative valuation, I have focused on other software companies with a mix of services and cloud products for B2B clients.

As is the case with many technology companies, it is difficult to compare earnings/margin multiples, which are all over the place across the set of peer companies. So, a better way to compare would be based on revenue multiples. On that particular parameter, Guidewire seems slightly undervalued compared to its peers. Given the company’s new focus on cloud and an experienced CEO at the helm, the new strategic shift will likely be successful and thus, there is plenty of room for multiples to expand going forward.

In sum, GWRE’s Mike Rosenbaum showed why he was roped in as CEO given his experience in cloud, which he sees as the technology of the future. His vision was clearly reflected in the company’s new long term strategy with a heavy cloud focus. The company will accelerate its revenue ramp from the cloud and will invest more R&D as well as SG&A to support that expansion. The short-term margin dilution should be offset by the medium-term ramp. Management has also put in an operational excellence plan into place to rein-in margin dilution in the future. Given its track record, I am confident in management’s ability to execute. With the company trading at a relative under-valuation, there is also plenty of room for multiples to re-rate as the company shifts toward the cloud.