Land & Buildings Investment Management is a real estate value investor. Their latest Form ADV shows $577 million in AUM as of December 31, 2018. Land & Buildings is most well known for REIT activism, although they ran a regular real estate focused fund for several years before switching the emphasis to activism. Their performance has been good recently. Forbes noted in 2016 that their activist positions returned over 35% on a gross annualized basis between 2012 and 2016. Overall, their fund has reported annual returns in the high teens, consisting of a mix of income and capital gain.

I keep tabs on Land & Buildings portfolio changes each quarter based on their 13F, in order to identify possible real estate value plays and future activist situations. During the third quarter, Land & Buildings kept up pressure on Brookdale Senior Living and Liberty Property trust, and also added four new positions, exited three positions. Notably their newly acquired positions appear to be in high performing REITs that are far from cheap.

I covered the Brookdale Senior Living(BKD) situation in detail in this article. They day after that was published they withdrew nominees to the board of directors. Land & Buildings had some choice words for BKD management:

Brookdale’s current Board and management have consistently demonstrated to us that they will do anything and everything to entrench themselves. This attitude is unfortunate and represents a true disservice to shareholders. However, while we view the conditional nature of the Board Chairmanship transition as the epitome of bad corporate governance, we support Guy Sansone ultimately becoming Chairman of the Board. Recent conversations with our fellow investors have reinforced our confidence in Mr. Sansone and we are hopeful that he can succeed where others have failed and actually right the ship at Brookdale.

They added to their position during Q3, but we won’t know until January 2020 if they exited their position after withdrawing nominees during Q4. This comment hints that they might hold on for future improvements:

Our public and private engagement with Brookdale’s Board and management over nearly three years has helped push the Company to make specific improvements that we believe would not have occurred without our involvement. These include adding Mr. Sansone to the Company’s nominee slate and providing a path for him to become Chairman of the Board, instituting a phased-in de-staggering of the Board, and restructuring certain leases. We are hopeful that Mr. Sansone can make further progress on real estate monetization and improving transactions with landlords to benefit Brookdale shareholders.

Liberty Property Trust (LPT) owns and operates industrial and office properties around the US. As of the most recent filings, Land & Buildings owned approximately 0.5 % of the outstanding shares and the position accounted for approximately 9.5 % of their 13F portfolio. During Q3, they put out this press release criticizing management for issuing shares at $50.50 per share.

Land & Buildings noted in the press release that they had been contacted by a third party interested in buying LPT for $60 per share. It appears this helped put the company in play. Prologis (PLD) subsequently offered to merge with LPT, exchanging PLD 0.675 sharesfor each LPT share. This implies a buyout price equal to approximately $61.30, based on PLD recent share price. The market seems to think the deal will get done, as LPT shares spiked after the offer, and now there is hardly any merger arbitrage spread. The deal is expected to close in the first quarter of 2020. It will be interesting to see if any other bidder comes in over the top.

Land & Buildings quickly built up a sizeable position in billboard REIT Outfront(OUT) media during Q3. They purchased over 1 million shares of OUT during the quarter, and now hold 0.69% of the company. The position accounts for 6.9% of their 13F portfolio. OUT pays a 5.8% dividend that is covered by both free cash flow(NYSE:FCF) and adjusted funds from operations(AFFO)

Value Zen built a good case for why OUT has a massive growth opportunity, and the stock is at least slightly undervalued in a recent Seeking Alpha article.

Land & Buildings established a position in Eldorodo Resorts (ERI), purchasing 523,940 shares shares during Q3. They now hold 0.7% of the company and position accounts for 5.1% of their 13F portfolio. They had held ERI shares before, but traded out of the position.

ERI’s offer to buy Ceasar’s Entertainment was approved by shareholders, and the transaction is expected to close in the first half of 2020. Michael Gayed covered this transaction in detail on Seeking Alpha. According to his analysis:

Caesars with a (−) 1.15 TTM EPS and a mammoth 7.52 D/E ratio is a beleaguered Goliath; Eldorado is an efficient and cash-rich David.

Land & Buildings purchased 22, 250 shares of data center REIT Equinix Inc (EQIX) shares during Q3. The position accounts 3.2% of their portfolio. This position is a negligible part of EQIX’s of $48.5 billion market cap, its unlikely Land & Buildings will be able to influence management much. EQIX is up 58%, and trades at 35x FFO. It currently yields 1.73%, and has also delivered decent dividend growth the past few years: 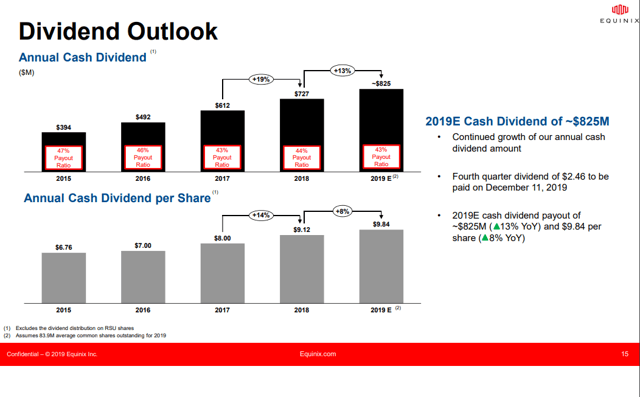 Land & Buildings purchased 174,450 shares of cold storage REIT Americold Realty Trust (NYSE:COLD) shares during Q3. The position accounts 1.6% of their 13F portfolio, although they own less than 1% of the outstanding stock. COLD is up ~48% YTD, and trades at over 30x FFO.

COLD already has presence across the U.S. as well as a few locations in Australia, Argentina, Canada, and New Zealand. 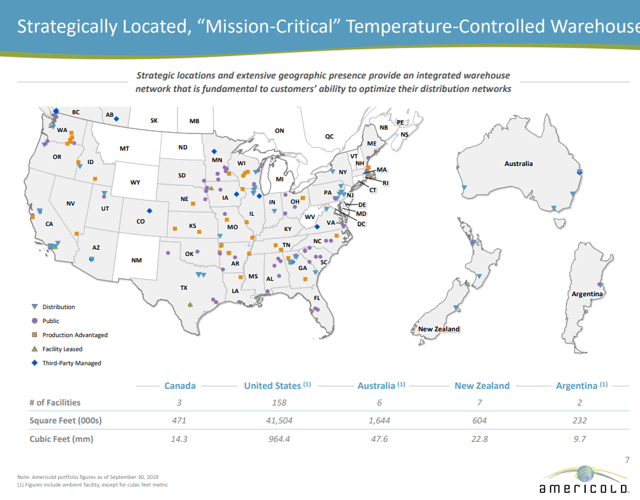 It recently announced plans to expand in Canada and the mid atlantic, with the purchase of Nova Cold Logistics from Brookfield Business Partners (BBU).

The following table summarizes changes in Land & Buildings Portfolio During the Quarter: