On November 5, Azimut Holding (OTCPK:AZIHY) (OTCPK:AZIHF) reported another stellar quarter, with 9M results now ahead 120% against last year. With shares appreciating 30% since my June call and rapidly approaching the indicated €23 target (€22.1 as of Nov. 15th), the time seems ripe to take a fresh look at the investment case. Although this is an underfollowed small cap that might be unfamiliar to some, I will give some of the basics for granted and focus on what’s new. I already covered Azimut several times on this site, and those interested can find more information about the company in previous articles.

Managed assets reached a new all-time high at €44.6 billion, with good organic increase y-on-y. AUM grew about €3.3 billion in the last 12 months, with a positive YTD net inflow of €3.7 billion. Total assets (AUM + AUC) also hit a new all-time high at €57.4 billion, increasing approximately €5 billion ttm. It is pleasing to see a continuing positive AUM trend, as this is the most critical health sign of any asset manager. Since my last article, net inflows have been positive every single month (June +0.7bn, July +0.5bn, August +0.2bn, September +0.3bn, October +0.3bn) for a total of €2 billion over five months. The inflow hence continued on the high side of my anticipated range of €300-400 million per month.

Presenting its 9M results, Azimut also provided additional color over the company’s push into the PE, VC markets as part of the new 2019-2024 strategic plan. In particular, Azimut expects this growth driver to bring in an additional €10 billion AUM to the business, with a near-term €2 billion target for next year. Sustained global expansion is the second pillar of Azimut’s growth strategy, with the company aiming to increase international and emerging markets operations relevance from the current 29% of the total AUM (about 20% of revenues) to 35% in 2024.

Overall, I think these are smart moves, and I applaud the management’s foresight in diversifying away from the slow-growing Italian market. Even so, through its extensive distribution network and focus on upper affluent/HNWI (90% clients), Azimut has been able to outpace Italian competitors in the domestic market, proving its model is resilient to the rise of passive investing and retains exceptionally high margins. The full implementation of the MIFID 2 directive, in the past another favorite argument of the bears, has instead turned into a bullish one, with Azimut successfully shifting the bulk of its revenues from variable performance fees to stable recurrent commissions, without negative impacts.

Effects on the P&L statement

After incorporating 9M 2019 results, I am slightly increasing my FY revenues forecast to €970M from the €955M previously supposed. The change accounts for higher-than-expected steady-state recurring fees under the new commission scheme. Interesting to note, insurance revenues have also meaningfully increased during the last year. The improvement was, however, already factored in my previous valuation. At the time, my estimate was well ahead of the consensus of €920M. With only three months left, other analysts had to come around and recognize Azimut’s strong performance, with the Street’s current top-line target revised significantly upward (€972M) and now matching my assessment.

If top-line numbers were slightly better than expected, so was Azimut’s ability to contain its core operating costs and increase margins. Driven by scale efficiencies, distribution costs trended down below 40% of revenues for the first time in a decade, and SG&A also improved significantly. I am estimating SG&A to be 21% at the end of 2019, a substantial improvement from the 24% average in the last three years. While non-operating expenses are somehow harder to forecast, Azimut enters the final quarter with some interest income. The non-op gains (likely one-offs) realized should help the company to lower the overall dues compared to previous years. I assume an effective tax rate in line with 2018. Based on this data, I now see a net profit of €312M for the year. 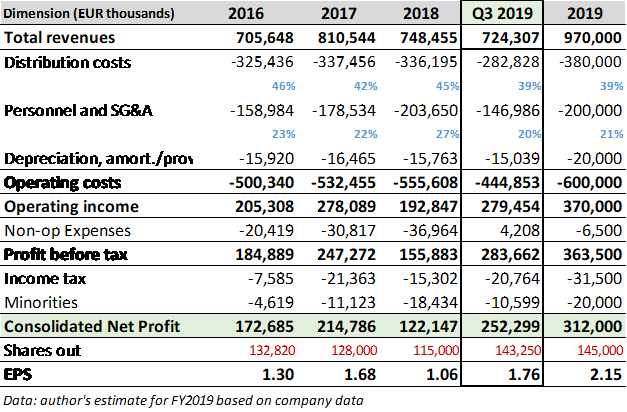 Effects on the dividend

Azimut already out-earned its full-year 2018 results by €0.7, reaching EPS of €1.76 for the nine months (+120%). The company distributed €1.5 this year, or 141% of earnings, leaving investors wonder about the safety of the dividend next year. The most recent presentation addresses this concern and leaves very little doubt that the company will be able to sustain the dividend going forward. Because Azimut’s advisors and top managers hold a significant stake in the company, management’s and investors’ interests are aligned, and shareholder return is of the foremost importance. Azimut is a top income pick; it’s not only a high-yielder, but also one of the most successful stocks of the FTSEMIB. While the stock has increased five-fold since IPO (2004), outstanding shares slightly shrunk (were about 144M in 2004, 143M now), and the company returned €1.6 billion in dividends and buybacks, 2.5 times its IPO market capitalization. 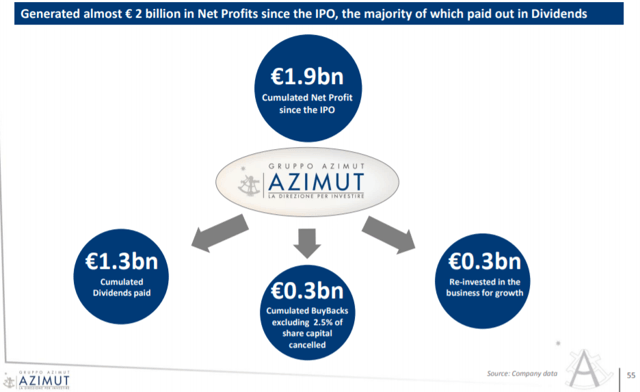 Although there shouldn’t be further dilution in the upcoming quarter (barring some unforeseen bolt-on M&A on which Azimut is very apt to), I wanted to play conservative, and from the €312M net income I expect for the year, I derived a €2.15 forward EPS estimate based on a fully diluted 145M share count leaving a few € cents of potential upside on the table. I see the €1.5 dividend as a floor, as a 70% payout falls within policy targets, but I expect Azimut to surprise again (as in previous years) and reward its shareholders with some extra on top, proposing €1.70 DPS or 80% payout (paid annually in May).

In my June assessment, I calculated a fair value of €23 per share, representing a P/E multiple of 12x attached to forward EPS of €1.9. At the time, Azimut was trading at about €16.5, and in spite of low sentiment among Italian analysts (consensus target was €16.8), I recommended the stock as a BUY considering the 40% upside potential.

Despite Q3 results and several PT increases, analysts continue to be late to the party all year and are still not fully reflecting Azimut’s results. While consensus on Reuters indicates consensus EPS up to €1.96 from €1.77 in June, the mean target still lags 10% behind my new €2.15 estimate. This revision in EPS was also the starting point in updating the two stages DDM I use to evaluate the company. 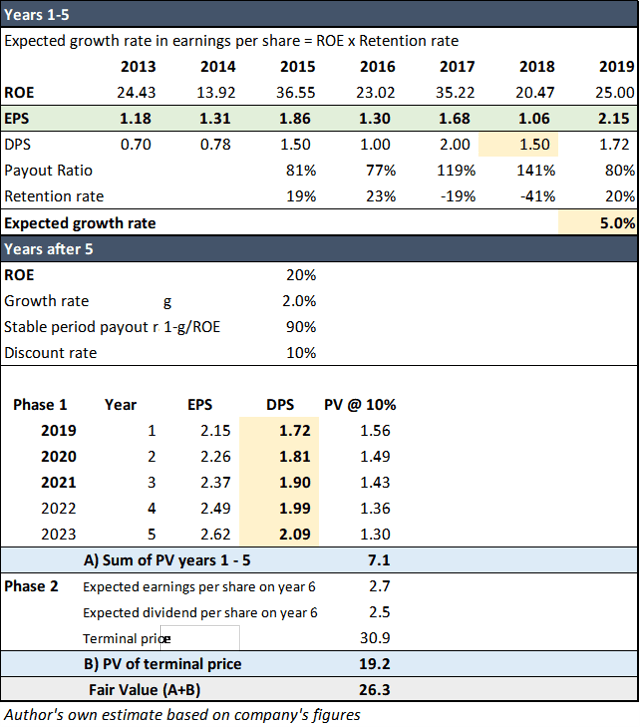 While I did not change my previous assumptions for ROE, which remains in line with past years, growth in stage 1 is up slightly from 4% to 5% as a function of the lower payout ratio (from 84% to 80%). Incorporating the higher starting EPS, I increase Azimut’s price target from €23 to €26, still representing roughly 12x forward EPS and a fair dividend yield of 6.5%.

I remain bullish and a happy holder of the stock, however, I am lowering my rating on Azimut from buy to outperform, as the stock has now less than 20% upside to fair value. I’d also consider dropping the rating to hold if the company hits €24 and trades within 10% fair value range.

Even at €26, Azimut may be on the cheap side. Both the company’s long-term P/E average and peer valuation indicate that a possible fair multiple could be indeed in the 14-15x range, but active asset managers have been through a rough patch in recent years. The market remains skeptical over the margin sustainability in light of decreasing fees trend. On one side, this might be especially true for a relatively small and active-focused manager like Azimut. On the other end, however, Azimut has proven to be much more resilient than peers in its home turf. The continuing strong positive inflows, higher (in Italy) than internationally acclaimed managers like BlackRock (BLK), are quite telling. 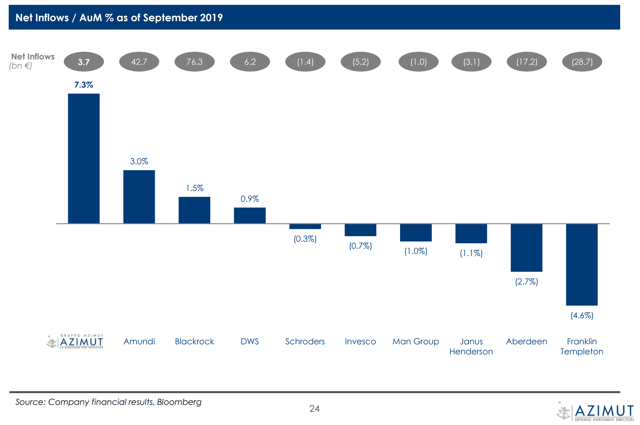 The discount may be unjust, but even if so, the market will be slow in conceding victory here. Hence, I don’t see Azimut trading at higher multiples (which would imply a valuation in the €30-32 range) in the foreseeable future. However, if the stock maintains the current momentum, we could see Azimut approaching fair value within the next months.

Disclosure: I am/we are long AZIMUT ON THE MILAN STOCK EXCHANGE. I wrote this article myself, and it expresses my own opinions. I am not receiving compensation for it (other than from Seeking Alpha). I have no business relationship with any company whose stock is mentioned in this article.