iQiyi (IQ) will report its 3Q19 results on November 6th along with Baidu (BIDU) (see: Baidu 3Q19 Preview: Looking For Growth, And A New CFO?).

The stock had a strong run-up to kick off the year but has declined from its February high due to the growing concerns on the overall macro environment, delay of the content releases due to regulatory scrutiny, and lack of hit content.

Heading into the quarter, we expect 1) ongoing regulatory scrutiny on content will likely limit subscription growth, 2) shift towards short-form video by advertisers will likely to persist, which could spill over to the KA ad wallet, 3) margin trend and 4) 2020 content pipeline.

With the stock trading at 2.7x forward EV/sales, which is slightly above its one-year average, it seems that the stock is reasonably priced although we would not recommend investors to accumulate given the lack of clarity going on content pipeline and the unaddressed structural challenges involving the battle between short and long-form video.

On subscription revenue, we are relatively cautious as we expect regulatory headwind to persist throughout the end of the year that will likely impact viewership and ad dollar. The bigger question that IQ investors should contemplate is whether the shift in media consumption will ultimately impact IQ as well as the other long-form video content sites such as Youku (BABA) and Tencent Video (OTCPK:TCEHY) (see: Tencent Q3 ’19 Preview: The Penguin Got The Cold Feet).

Our view is that we believe the growing millennial and Gen-Z demographics are creating a shift in the media consumption habit globally from long-form media entertainment such as movies and TV shows to short-form entertainments such as TikTok given the surplus of entertainment available and limited timeshare one has within a 24-hour time frame. As such, we expect a gradual erosion of viewership and advertisers on the long-form videos as they migrate towards the short-form platforms. Although this trend is unlikely to be detrimental to IQ in the near-term, we expect the impact could be more pronounced in the long run and something that investors should not ignore.

On the advertising front, we believe IQ is facing double trouble on both the KA (key accounts) and the SMEs. On the KA side, the lack of sustained hit content is resulting in lower KA ad dollars, while on the SME side the ad dollar and advertisers are gravitating towards the short-form video platforms such as TikTok. Although KA continues to command a majority share of the ad wallet share, the rising number of advertisers shifting towards short-form video is a concern, in our view. 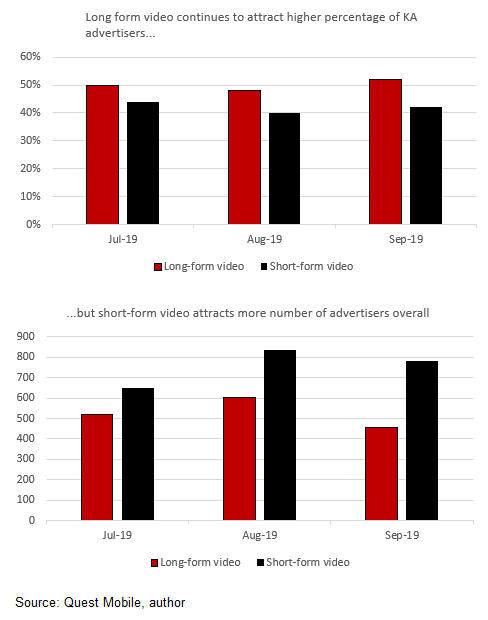 On the margin side, content investment remains a key focus given higher content attracts more users. Although content spending as a percentage of revenue has largely remained stable for IQ, the dollar value on content spending has trended upward more aggressively compared with its peers. Worth noting that Q3 could potentially see some margin pressure as IQ released a new hit drama, Love and Destiny, this quarter (higher content cost), amid a slowing subscription and ad environment (stagnant revenue growth).

Finally, we will be looking for updates on the 2020 pipeline. At a recent IQ conference, management indicated that they will release 1 or 2 top drama and some high-quality variety shows to ensure steady subscription and ad revenue. The summer Olympic and the UEFA Euro Championship could also attract some ad dollar flow.

India stocks higher at close of trade; Nifty 50 up 1.00% Investing.com – India stocks were higher after the close on Thursday, as gains in the , and sectors led shares higher. At the close […]