Silver had been trading in a $17 to $18 per ounce range for most of October. On Friday, October 25, the price of nearby December futures broke out of the range on the upside as silver traded to a high at $18.35, the highest price since late September.

Silver can be the most volatile precious metal that trades on the futures exchange as it tends to attract speculative interest when the price starts to trend higher or lower. Silver has been in the spotlight over the past months. More than a handful of traders at some of the world’s leading financial institutions face indictments for manipulating the price through spoofing and other illegal activities in the gold and silver markets.

Gold broke out to the upside in June when the price of the yellow metal rose above its level of critical technical resistance at the July 2016 high of $1377.50. Gold continued to move higher, reaching a peak of $1559.80 in early September and was trading at over $1500 on November 1.

Meanwhile, silver has yet to challenge its July 2016 high at $21.095 per ounce. The nearby silver futures contract ran out of upside steam at $19.54 per ounce in early September. After a correction that took silver down to just under the $17 level on October 1, silver has reloaded and could now head higher. If silver is going to challenge its 2016 peak, silver mining shares are likely to outperform the price of the metal on a percentage basis. The Global X Silver Miners ETF product (SIL) holds shares in many of the world’s leading silver producing companies.

A judge makes a ruling

Spoofing goes on in markets across all asset classes. Those who advocate spoofing would argue that it is an essential activity when it comes to disguising execution and hedging positions. One of my colleagues, Todd “Bubba” Horwitz, has said that spoofing is present in all business transactions. Bubba argues that when we sell a house or piece of real estate, most people attempt to “spoof” the price higher. The CFTC and Department of Justice do not agree. They have charged more than a handful of traders with market manipulation because of their consistent spoofing activities over the past years.

Last week, a ruling from a Chicago federal court judge said that spoofing is a crime and that prosecutors can proceed under the wire fraud statute.

The decision by Judge John Tharpe in US District Court in Chicago supports federal prosecutors’ efforts to criminally charge individuals for spoofing trades as far back as ten years. Ten years is the statute of limitations for wire fraud that affects a financial institution. The ruling was significant because charges of commodities fraud and violations of the Dodd-Frank Act, which specifically made spoofing an offense, has only a five to a six-year statute of limitations.

The ruling will impact charges against a slew of traders from Deutsche Bank, JP Morgan, and other institutions. The charges against have come down on traders in the precious metals business. The defendants in the case had argued that wire fraud requires making a false statement, which is an express misrepresentation. The judge did not buy the argument as he said:

As there is no material difference between a scheme to defraud under either statute, the answer to the question presented is yes: the alleged spoofing scheme alleged in the indictment adequately charges violations of the wire fraud statute.

The Justice Department continues to crack down on spoofing in the precious metals market aggressively. Federal prosecutors have lodge thirteen spoofing cases against nineteen defendants in the past five years. The latest indictments came in September when three current and former JP Morgan precious metals traders were charged with spoofing and a racketeering conspiracy in connection with a multiyear scheme to manipulate precious metals prices.

While the courts have supported the Department of Justice’s charges, trade groups have argued to the contrary. The Futures Industry Association, the US Chamber of Commerce, the Bank Policy Institute, and the Securities Industry and Financial Markets Associations all filed briefs last January and February against the expansion of the wire fraud statute. In its filing, the FIA wrote that the organization:

Objects to the government’s attempt to expand the wire fraud statute in a new wat that unnecessarily invites harm to legitimate trading and the vitality of the futures market. If accepted, the government’s theory of liability poses a serious risk of chilling legitimate, non-fraudulent trading by FIA’s members and other market participants.

I have written many times that while spoofing is illegal and requires punishment, RICO charges are more than a reach by the Department of Justice. Meanwhile, after the latest ruling, it will be up to juries to decide the fate of the traders currently charged and those that will face the music over the coming weeks, months, and years.

When it comes to silver, sentiment rather than spoofing continues to be the primary factor when it comes to the path of least resistance of the price of the precious metal. Silver was flirting with the top end of its recent trading range over the recent sessions.

Over the past weeks, the price of silver remained mostly within a $17 to $18 trading range.

The weekly chart highlights that the silver futures market has moved to the top end of its trading range. On Friday, October 25, the price moved above the $18 per ounce level, reaching a lower high at $18.35. One week later on November 1, the price was at under $18.05. Price momentum and relative strength indicators were on either side of neutral territory. Open interest, the total number of open long and short positions in the silver market rose to almost the 225,000-contract level on October 31. Rising price and increasing open interest tend to be a bullish sign in a futures market. Weekly price volatility has climbed from just over 6% in April to 18.34% as of November 1, which reflects the wider trading ranges in the silver futures market.

The high in the continuous silver futures contract on COMEX came in early September when the price reached $19.54 per ounce. The active month December contract traded to a peak at $19.75 on September 4.

Silver never reached its critical level of technical resistance at the July 2016 high at $21.095 per ounce, which is the most significant level to watch on the upside.

Both gold and silver are consolidating, and digesting gains made since June. While gold has not returned to test its breakout level at $1377.50, the July 2016 high, silver has yet to achieve that feat.

The long-term quarterly chart presents the most bullish picture of the silver futures market. 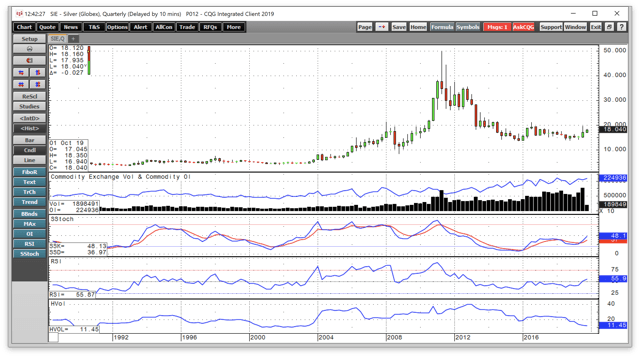 The quarterly graphic shows that all systems could be go for an eventual challenge to the critical level of technical resistance above $21 per ounce in the silver futures market. Open interest has been climbing since October 2018 when the price was below $14. Price momentum crossed higher in the upper region of oversold territory in July 2019 and is rising towards a neutral reading. Relative strength at 55.9 is heading above a neutral condition, indicating that the trend remains higher despite the current consolidation. Quarterly price volatility at 11.45% is at the lowest level since 2003, when silver was preparing to go on a multiyear ride to the upside that took the price to a peak at $49.82 per ounce in 2011.

Meanwhile, the 2016 high at $21.095 is the most significant level on the upside. A move to above that level could cause a herd of trend-following buyers to descend on the silver futures market. In silver, sentiment drives the price, so galloping with the pack when the price trends can be a highly profitable strategy.

Silver mining stocks could take off on the upside

If silver is going to take off on the upside over the coming months, silver mining stocks are likely to outperform the price action in the silver futures market on a percentage basis. The Global X Silver Miners ETF product holds a diversified portfolio of many of the leading silver producing companies in the world. SIL is an instrument that mitigates the risk of investing in single companies. The most recent top holdings of SIL include: 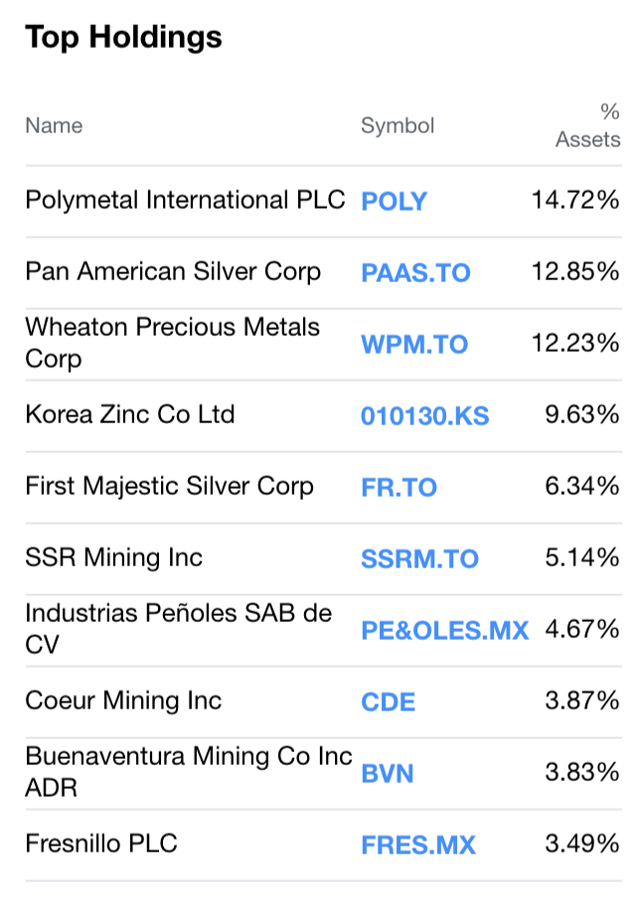 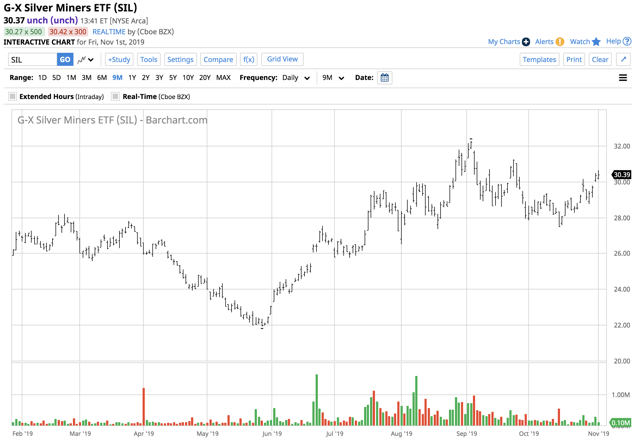 Over the same period, SIL rallied from $21.91 to $32.26 per share or 47.2% as the silver mining shares outperformed the price of silver on a percentage basis. The correction took silver down to a low at $16.94 or 13.3%. SIL fell to a low at $27.47 in mid-October or 14.8%. Silver mining shares outperformed the price of the metal on the upside and underperformed on the downside. However, SIL has held up incredibly well, which could be a bullish sign for the silver market.

SIL provides a leveraged position in silver on the long side of the market, but since it holds mining shares, it does not suffer from the time decay that is present in other leveraged products.

The silver market continues to look bullish at just below the $18 per ounce level. When it comes to the spoofing and market manipulation issue, the markets changed in the aftermath of the 2008 financial crisis and with the advent of electronic trading. Those facing charges used a dominant position in markets and ignored the rules. However, the Department of Justice’s track record when it comes to prosecutions has been weak. Time will tell if juries decide that the charges, the DOJ leveled, fit the alleged crimes. The recent ruling from a Federal Court judge allows the charges to stand. The verdict now throws the issue into the laps of the jurors. They will decide if the DOJ has overreached with its RICO charges for what is bad behavior under the law.

The author is long silver