It has been a tough earnings season for traditional retailers. Many are having a difficult time growing revenue. Others have had to engage in promotions to drive traffic to the stores. Gap (GPS) was no exception. In its most recent quarter, the company reported total revenue of $4.0 billion, down 2% Y/Y. The decline was mainly driven by Gap Global, whose revenue fell by double digits. 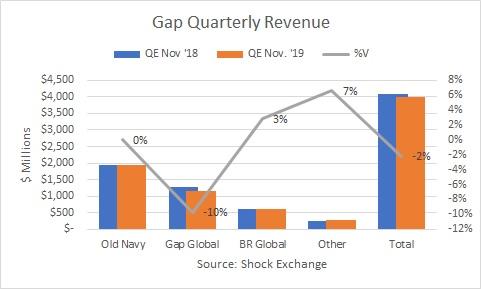 Revenue for Old Navy of $1.9 billion was flat. Old Navy represented 49% of total revenue and was the company’s largest segment. Revenue from Gap Global fell 10% Y/Y, while Banana Republic Global rose 3%. Total comparable sales fell 4% Y/Y. Comparable sales for Old Navy, Gap and Banana Republic were down 4%, 7%, and 3%, respectively. Old Navy was experiencing headwinds prior to the quarter. The brand was having trouble driving traffic into stores organically. It also was facing stiff competition from retailers whose singular focus was on delivering value. In my opinion, Old Navy’s apparel has always been fashionable. However, management may have to face competitive pressures and talk up the brand’s value proposition.

Revenue from Gap Global fell due to store closures, partially offset by growth at Athleta, the company’s brand for active women. Comparable sales at Banana Republic were challenged by warmer-than-anticipated weather and a less-than-ideal mix of inventory on hand. Overall, sales remain challenged across brands. It could take a few quarters for management to repair these brands to ensure they have the optimal messaging, price points and product mix.

Gross margin was 39.0%, down 70 basis points versus the year earlier period. Gross profit of $1.6 billion fell 4% Y/Y, and the decline was much more than the decline in revenue. Merchandise margin fell, primarily driven by Old Navy and Banana Republic, and partially offset by Gap and Athleta. Gap may be performing better pursuant to margins, but its revenue also declined the most. In effect, a declining margin business like Old Navy represented a higher mix of sales. Old Navy represented 82% of total revenue, up from 80% in the year earlier period. That said, the aggressive promotional environment besetting retailers cannot be good for margins long term.

Operating expenses of $1.3 billion rose 6% Y/Y. They were 33.5% of revenue, up 270 basis points versus the year earlier period. The increase was due to the need to continue to invest in technology in order to support top-line growth. The fallout was that EBITDA of $361 million fell 27% Y/Y. EBITDA margin was 9.0%, down 300 basis points Y/Y. The free fall in EBITDA could continue amid falling revenue, shrinking margins and rising SG&A expense.

The earnings picture will likely worsen after the company cut its profit forecast:

Gap’s saving grace was its solid balance sheet. The company had cash and investments of $1.1 billion and a debt load of only $1.2 billion. Its cash nearly matched its debt. However, its free cash flow (“FCF”) was weak. Through the first 39 weeks of the year, Gap generated FCF of about $5 million. This is paltry. Its cash and investments were $172 million lower than they were in the year earlier period. The company’s EBITDA is in free fall, and I would rather see Gap squirrel away capital to buffer any future diminution in the business. The company’s balance sheet and liquidity are solid for now, but I envision its liquidity deteriorating as time goes by.

GPS trades at about 3.5x last 12 months’ (“LTM”) EBITDA. This appears like a low multiple, yet EBITDA is falling hard. The stock is off over 35% Y/Y. Sell GPS before it falls further.

I also run the Shocking The Street investment service as part of the Seeking Alpha Marketplace. You will get access to exclusive ideas from Shocking The Street, and stay abreast of opportunities months before the market becomes aware of them. I am currently offering a two-week free trial period for subscribers to enjoy. Check out the service and find out first-hand why other subscribers appear to be two steps ahead of the market.

Pricing for Shocking The Street is $35 per month. Those who sign up for the yearly plan will enjoy a price of $280 per year – a 33% discount.