In mid-November, I asserted that I expect the EUR/USD to hit the 1.05 mark in a matter of months.

My reasons for doing so included the fact that zero rates in Europe are expected to last until 2022 at the earliest, and Italian bonds are now yielding higher rates than that of Greece – which has not happened since 2008.

Some agreed and disagreed with my previous assertion. Here are some comments from my last article:

I would like to share my view on the second comment in particular. Presumably, the above reader has made this comment given that a weak euro (and conversely strong dollar) would harm U.S. exports and thus the Federal Reserve would intervene to stop this from happening.

However, the United States has been in a unique position in the past couple of years – in that the greenback has been rising against virtually all major currencies (including safe havens such as the Swiss Franc and Japanese Yen), while exports and wage growth have continued to increase.

Indeed, the greenback has become a safe haven in its own right – and even with the high debt load of the United States – the U.S. dollar continues to remain in demand and thus a weaker dollar would not necessarily stimulate economic growth. Therefore, I do not see the Federal Reserve intervening with rate cuts to weaken the dollar as exports and wage growth have continued to rise regardless.

As far as the eurozone is concerned, there is growing doubt as to whether fiscal stimulus can actually be effective in raising inflation across an economy as large as that of Europe. According to the Center for European Policy Studies in Brussels, “One would need a very large fiscal deficit to have even a modest impact on inflation or interest rates”.

In this regard, inflation is likely to lag below the 2% target for some time. At the same time, the ECB has committed to low rates until 2022, and to change policy now would induce significant uncertainty where economic growth is concerned. 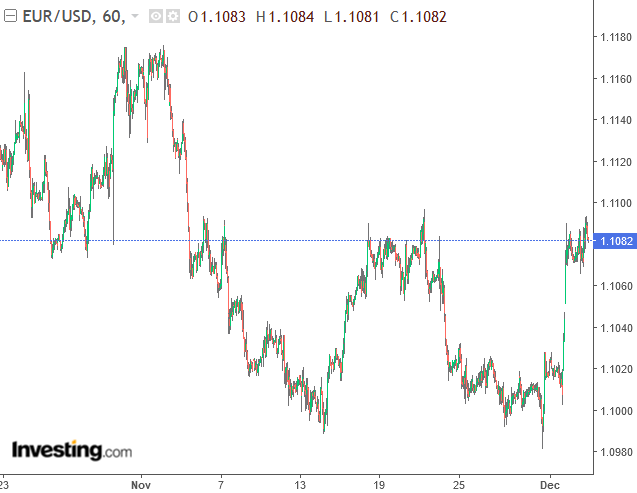 The euro is largely trading in a stationary manner relative to the greenback – with trading activity this week being among the quietest since the euro was founded. That said, should divergence in growth between the euro area and the United States become more pronounced, then I take the view that the EUR/USD could well descend below the 1.05 mark at some point in 2020.