It could be an excellent time to start thinking about renaming the Platinum Group Metals. After all, since 2016, the price action in rhodium and palladium has left the namesake head of the group in the dust. Platinum has been a laggard. The old title as “rich man’s gold” is as inappropriate from an investment perspective today as it is from a social one.

Meanwhile, the price action in platinum in 2019 was not that bad. The platinum futures market looks like it will post a double-digit percentage gain compared to its closing price at the end of 2018. If the price action in the other members of the precious metals sector, including gold, palladium, and rhodium, are harbingers of the future for platinum, 2020 could turn out to be an exciting year for devotees of the metal that has not lived up to its reputation as a rare precious and industrial metal.

Meanwhile, the precious metals sector of the commodities market is barreling into 2020 after a bullish run in 2019. The Aberdeen Standard Physical Precious Metals Basket Shares ETF (NYSEARCA:GLTR) holds long positions in gold, silver, platinum, and palladium bullion. A diversified approach to the sector could be an excellent way to spread risk going into the new decade that is just around the corner.

Rhodium is the star

In 2016, the price of rhodium fell to a low at $575 per ounce. Rhodium is a byproduct of South African platinum output. The weakness in the platinum price, which fell to the lowest level since 2003 in 2018 when the price reached $755.70 per ounce, caused a decline in south African platinum production. Less platinum mining caused a deficit in the rhodium market, which does not trade on the futures exchange. In the physical market, the price of rhodium took off like a rocket ship.

As the chart highlights, rhodium was trading at a midpoint value of $5,840 per ounce on December 19, over ten times higher than the price in 2016. The deficit in the rhodium market could continue to push the price higher in 2020, and a test of the all-time high at just over $10,000 per ounce could be in the cards for the platinum group metal. Rhodium has been the best performing PGM over the past years. In 2019 alone, the price more than doubled, moving from below the $2,500 level at the end of 2018 to almost $6,000 per ounce on December 17.

An incredible year in the palladium market continues to the end

While rhodium is the metal with the most impressive percentage gain since the 2016 low, the price action in palladium pushed the price of the metal to a series of new all-time highs throughout 2019.

The quarterly chart of nearby NYMEX palladium futures illustrates that, before 2017, the all-time peak came in 2001 at $1,090 per ounce. Palladium blew through that high like a hot knife goes through butter and has posted gains in the past seven consecutive quarters. The price was approaching the $2,000 per ounce level as of last week when it hit a high at $1,974.60 on the active month March futures contract on December 17.

The ascent of palladium is a function of the rising demand for catalytic converters for gasoline-powered automobiles. The “phase one” trade deal between the US and China could stabilize the Chinese economy lifting requirements for new cars and palladium-based catalytic converters in the world’s most populous nation. On the supply side of the fundamental equation for palladium, supplies come from South Africa and Russia. In Russia, platinum group metals are a byproduct of nickel output.

Platinum shows some signs of life

The price action in platinum has lagged rhodium and palladium over the past years, and 2019 has been no exception. However, platinum looks set to post a gain for the year that is coming to an end.

The monthly chart shows that platinum closed 2018 at $788.50 and was trading around the $937 level on December 19. Platinum looks set to deliver a double-digit percentage gain as it was 18.8% higher than the 2018 closing price. However, its performance pales in comparison to the palladium and rhodium markets.

The weekly chart displays that platinum has made higher lows and higher highs throughout 2019. The price range in the platinum market has been from $787.30 and $1,000.80 on the continuous futures contract. At $937 on December 19, the price of platinum around $43 above its midpoint for the year. While platinum is not breaking any records, the price action is going into 2020 in a bullish trend.

Platinum group metals have a myriad of industrial applications. Aside from automobile catalytic converters, the dense metals with high resistance to heat are required in oil and petrochemical refining, fiberglass manufacturing, medical devices, and a host of other applications. Of the three metals, platinum is the densest, with the highest boiling and melting point. Therefore, platinum can serve as a substitute for rhodium and palladium in industry.

Platinum also has a history as a financial asset and a store of value. Since the 1970s, platinum had mostly traded at a premium to gold as it is over ten times rarer than the yellow metal when it comes to annual output.

Platinum moved almost 19% higher in 2019, gold broke out to the upside in June but slightly lagged platinum so far in 2019.

Precious metals are going into the new decade on a bullish note after posting across the board gains in 2019. The low level of global interest rates could cause a continuation of bullish price action in 2020.

An ETF product that offers a diversified approach to a precious metals investment is the Aberdeen Standard Physical Precious Metals Basket Shares ETF. The fund summary for GLTR states:

“The investment seeks to reflect the performance of the price of physical gold, silver, platinum and palladium in the proportions held by the Trust, less the expenses of the Trust’s operations. The Shares are designed for investors who want a cost-effective and convenient way to invest in a basket of Bullion with minimal credit risk.“

The most recent top holdings of GLTR include: 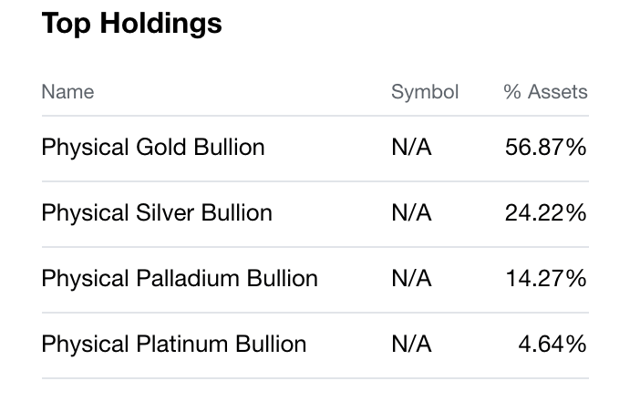 The author is long platinum, gold, and silver

US Dollar Talking Points: The US Dollar finds itself between fairly well-defined support and resistance. The big driver for this week is Friday’s NFP release, and there’s perhaps even more emphasis on employment data following […]