Starts rose 3.2% in November to a 1.365 million annual pace, which is up 13.6% over the past year, while permits rose 1.4% to an expansion high of 1.482 million. Permits are up 9% for single-family homes and 15% for multi-family homes. The rise in permits has led builder sentiment to a 20-year high. A decline mortgage rates of more than a full percentage point over the past year is also adding tremendous fuel to the fire. The number of housing units under construction is now running 2% above the third-quarter average, which means that residential construction will contribute to growth in the fourth quarter.

Existing homes surprisingly declined 1.7% in November to an annual rate of 5.35 million, which results in sales now being up 2.7% over the past year.

The median sale price of a single-family home has risen 5.4% over the past year to $271,300, but we are told there is no inflation. The number of homes for sale is down 5.7% over the past year to 1.64 million. This is surprising considering the decline in mortgage rates, and it is blamed on limited supply, but I think it has just as much to do with higher prices being less obtainable for the average household income, which has stagnated. Full employment does not necessarily translate into mobility or accumulating the required liquidity for a down-payment on a home.

Markit’s Composite PMI is showing business activity at a five-month high, contrary to what the ISM Indexes reflect. The index rose to 52.2 in mid-December from last month’s 52.0. This is NOT gang-buster growth, but it is very modest improvement in the right direction, as 50.0 is the line of demarcation between growth and contraction. What was notable in this survey was that the rate of job creation was the quickest since July. The service sector rose to 52.2 from 51.6, while the manufacturing sector slipped from 52.6 to 52.5. 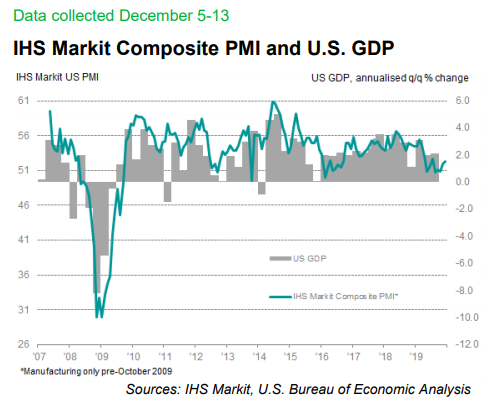 The service sector continues to see greater strength than manufacturing, noted by the rate of job creation, which was the quickest since July, but both are now moving in a positive direction. This is lifting confidence in the outlook with less concern over the trade war than in the prior month. Still, this survey is consistent with GDP growth of just 1.5%

A needed bounce in industrial production for November of 1.1% was fueled largely by the manufacturing of motor vehicles and parts, which rose 12.4%. Otherwise, the increase was just 0.5%. Mining output fell (0.2%) for the fourth month out of the last five, and utility output rose 2.9%. The pick-up in auto production was due to the end of the General Motors (NYSE:GM) strike. Over the past year, industrial production is now down 0.8%. 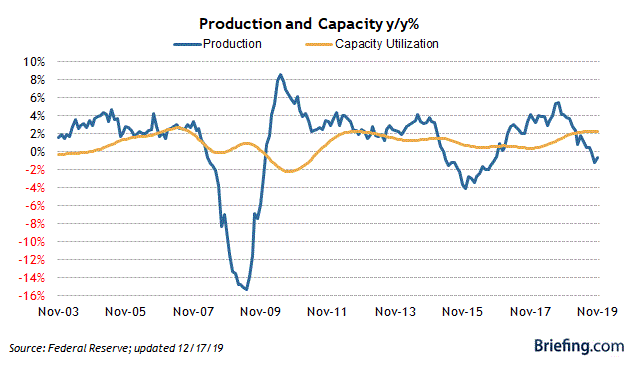 There is a big gap between the number of hires and the number of jobs available to workers in the Job Openings and Labor Turnover Survey. The number of openings increased by 235,000 to 7.27 million in October, but the number of hires fell by 187,000 to 5.76 million. The issue continues to be that employers can’t find qualified workers to fill openings, which has been the case since 2014. That’s the first year that openings exceeded hires. The key number to watch here is openings, for if they start to decline, it means that employers are pulling listings, which they will do in advance of laying off workers. Now the gap between skills desired and what’s available is slowing down growth in the labor force. 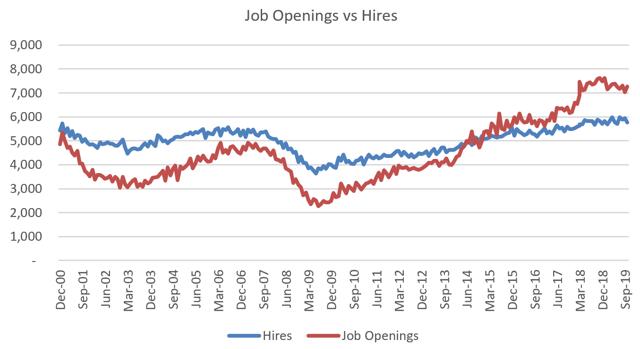 Personal income rose 0.5% in November, and October’s no change was revised up to 0.1%, while personal spending rose 0.4%. The PCE Price Index, which is the Fed’s preferred method of measuring inflation, rose 0.2%, and the core rate excluding food and energy rose 0.1%. The year-over-year rate is 1.7% and the core rate is 1.6%. This means that real (inflation-adjusted) consumer spending rose a very strong 0.3% last month and 2.4% over the past year. This indicates a continued steady rate of economic growth. 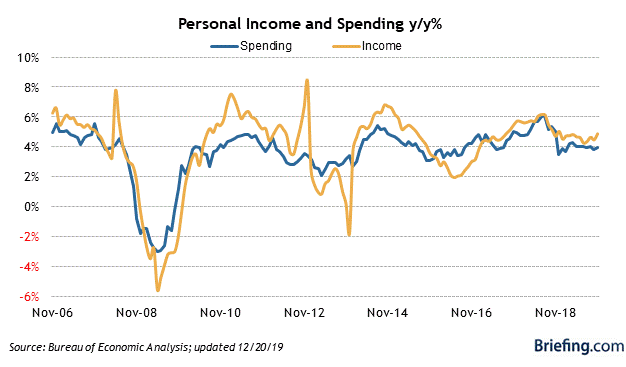 The aggregate numbers on the U.S. economy couldn’t get much better for the investment landscape. We have slow and steady growth that allows the expansion to continue, but without raising the specter of inflation. This has given the Fed an opening to provide even more monetary stimulus, which is further inflating financial asset prices. The reason this stimulus is not leading to the higher rates of inflation that the Fed is targeting is that financial wealth does not necessarily translate into greater demand for goods and services. It depends on how that wealth is distributed. If a millionaire realizes an additional $10,000 in income or capital gains, he will likely reinvest that money in more financial assets. If 10 middle-class American households realize an additional $1,000 in income or capital gains, they are likely to spend the majority of that on goods and services.

The Portfolio Architect is a Marketplace service designed to optimize portfolio returns through a disciplined portfolio construction and management process that focuses on risk management. If you would like to see how I have put my investment strategy to work in model portfolios for stocks, bonds and commodities, then please consider a 2-week free trial of The Portfolio Architect.