For sugar traders, the year 2020 is so far providing a welcome respite from the extreme volatility of the last two years. For much of 2018 and 2019, sugar prices endured not only global oversupply issues but also a seemingly relentless onslaught of bad news for the industry. The coming months promise to be a period of refreshment for sugar, thanks in large part to a decline in supply in some top-producing Asian countries. In this report, we’ll look at some of the promising developments which bode well for the continuation of sugar’s intermediate-term rising trend.

On Jan. 15, China and the United States made official the first phase of a trade deal that will benefit the U.S. agriculture industry. Under the terms of the deal, China has agreed to buy $200 billion worth of U.S. goods in the two years ahead, including $32 billion in farm products. Included in the products which China has agreed to buy from the U.S. are corn, soybeans, cotton, and wheat. Sugar-related chemicals are also on the list.

While the trade deal isn’t specifically aimed at sugar growers, the dramatic shift in sentiment toward the ag complex, in general, has definitely spilled over into the sugar futures market. Traders are ecstatic over the ag commodity outlook going forward, and the entire complex stands to benefit from the increasingly positive sentiment toward natural resources.

More importantly for sugar prices, however, is the latest news which points to a supply reduction in Asia. Major Asian producers Thailand and India are among those expected to witness declines in cane production this year in response to the oversupply of the previous years. Australia is also expected to see its lowest sugar production levels since 2012/2013, adding to the diminished supply picture for the coming year.

The supply disruptions in various parts of the sugar-growing world have already benefited the price outlook in recent months. So far this year, sugar futures prices have gained more than 7% on shortfall concerns and increased momentum trading interest from commodity funds and small speculators. ING noted in a Jan. 15 report that March/May 2020 #11 raw sugar time spread has reversed from contango to backwardation, as traders become increasingly concerned over the supply outlook. ING further observed:

The sugar market was expected to strengthen this year, as it transitions from a surplus to deficit environment, however the scale of the move has clearly taken many by surprise. This has occurred as it has become more apparent that the deficit for the current marketing year will be larger than many had initially expected.

Meanwhile, the U.S. Agriculture Department released its highly anticipated World Agricultural Supply & Demand Estimates (WASDE) report on Jan. 10. According to the USDA report, “Total U.S. sugar supply for 2019/20 is reduced by 99,566 short tons,” based on lower production expectations. Recent problems in sugar beet-growing Midwestern states have been the primary contributors to the domestic supply shortfall.

Turning our attention to the near-term technical outlook, sugar futures and sugar ETFs are on what can only be described as a “rip-and-tear.” Indeed, sugar is currently one of the top-performing commodities in terms of monthly percentage gains and price momentum factors. Shown below is my favorite sugar-tracking vehicle, the Teucrium Sugar Fund (CANE), which has taken on the properties of a pure momentum trade at this point in the new year. While I don’t advise chasing the price higher now if you have no position in the ETF, those currently long CANE can maintain long positions and use the 15-day moving average (on a closing weekly basis) as a rolling stop-loss guide. 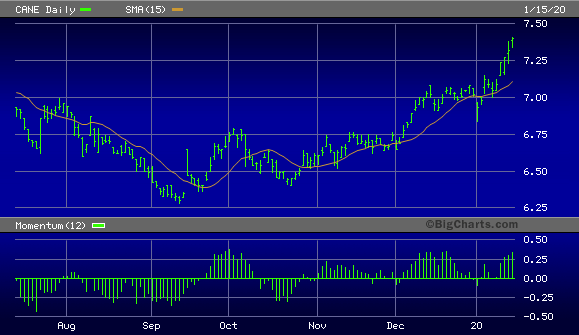 The market is still trying to evaluate the full extent of the shortfall in world sugar production as we head further into the current growing season. The improved sentiment toward ag commodities, in general, due to the U.S.-China Phase One trade deal will also continue to boost sugar prices. Based on my assessment of the fundamentals discussed here, coupled with increasing interest from hedge funds and institutional traders (which is partly responsible for the recent acceleration in sugar futures prices), I anticipate a lively bull market for sugar in the intermediate-term (3-6 month) outlook.

On a strategic note, I am currently long the Teucrium Sugar Fund. After the recent breakout to a four-month high in this ETF, I’ve taken some profits in CANE and have also raised the stop-loss on the remainder of this trading position to slightly under the $7.10 level.

Disclosure: I am/we are long CANE. I wrote this article myself, and it expresses my own opinions. I am not receiving compensation for it (other than from Seeking Alpha). I have no business relationship with any company whose stock is mentioned in this article.

By Jim Iuorio At A Glance The rise in gold in 2020 is due to “a perfect storm” of central bank actions and economic turmoil, according to market roundtable. Gold should be one of the […]

Prepared by Tara, Senior Analyst of the team at BAD BEAT Investing We were asked by a member about Greene County Bancorp (NASDAQ:GCBC). This is a stock we had never looked at. We (Quad 7 […]