In 1980, the price of gold rose to a high of $875 per ounce on the nearby NYMEX futures contract. The yellow metal did not return to that level for twenty-seven years. In 2008, after reaching a new high at over $1000 per ounce, the price slipped back to a low of $681 during the risk-off period caused by the global financial crisis.

The housing and mortgage-backed securities crisis in the US and sovereign wealth problems in Europe caused a meltdown in global markets. At the same time, it set the stage for the bull market in gold as central banks throughout the world slashed interest rates and flooded the global system with fiat currencies to encourage borrowing and spending while inhibiting saving. The environment created back in 2008 to prevent a worldwide recession, or worse, continue to be the central theme of central bank monetary policies twelve years later. Meanwhile, the price of gold has not traded below the 1980 peak at $875 since 2009. At the $1570 level, the yellow metal looks set to move even higher and eclipse the 2011 all-time peak at $1920.70.

If gold is going significantly higher, junior gold mining shares are likely to outperform the percentage gains in the yellow metal. The VanEck Vectors Junior Gold Miners ETF product (GDXJ) holds a portfolio of shares of some of the top junior mining companies that explore for and extract the yellow metal from the crust of the earth.

Gold has been working its way higher since August 2018 in the next leg of the bull market that began in the early part of this century.

The solid line on the weekly chart illustrates that the open interest metric not only moved higher with the price of gold but rose to a new record peak of 799,541 contracts in January. At the 798,822-contract level at the end of last week, the relationship between open interest and price continues to present a compelling validation of the bullish price path of gold.

Price momentum in the daily chart is turning

As the daily chart of nearby February COMEX futures shows, the pullback alleviated the overbought condition when it comes to price momentum and relative strength indicators. Both turned higher at the end of last week and were above neutral readings leaving room on the upside.

Interest rates are not going to increase anytime soon, and central banks will keep buying gold

Lower rates in the US and around the world lit a bullish fuse under the gold market. The odds of a rate increase by the Fed over the coming months are slim. Since 2020 is an election year in the US, and the Fed is an apolitical body, the central bank should remain on the sidelines. The low level of interest rates in the US, Europe, and around the globe is a supportive factor for the price of gold. While gold has made upside progress towards its all-time high in US dollar and Swiss franc terms, it has already achieved that feat in most other currencies. The bull market in gold is as much a sign of strength and demand for the yellow metal as it is a commentary on the value of fiat currencies. As gold moves higher against all foreign exchange instruments, currency values decline. Over a decade of accommodative monetary policy flooded the world with liquidity, and those policies continue to provide support for the price of gold, which is the oldest means of exchange.

Meanwhile, central banks and governments hold gold as an integral part of their foreign exchange reserves. They have been net buyers of gold over the past years, and that trend is likely to continue in 2020 and beyond. China and Russia have increased their reserves by vacuuming in domestic production and purchasing the yellow metal on the international market. Many other countries have been adding to reserves. I late 2019, Poland repatriated 100 tons of the metal within its borders. A combination of low interest rates and central bank buying is a potent bullish cocktail for the price of the yellow metal. I continue to believe that gold will move to a new record high in dollar terms and that prices above the $2000 per ounce are on the horizon.

An investment in a single junior gold mining company or a few involve idiosyncratic risks. Even if the price continues to rise, management mistakes or problems or issues surrounding specific mines could cause a particular company to underperform or, in the worst case, go bust. Therefore, I favor a portfolio approach when it comes to investing in junior miners in the gold arena. The tops holdings of the VanEck Vectors Junior Gold Miners ETF product include: 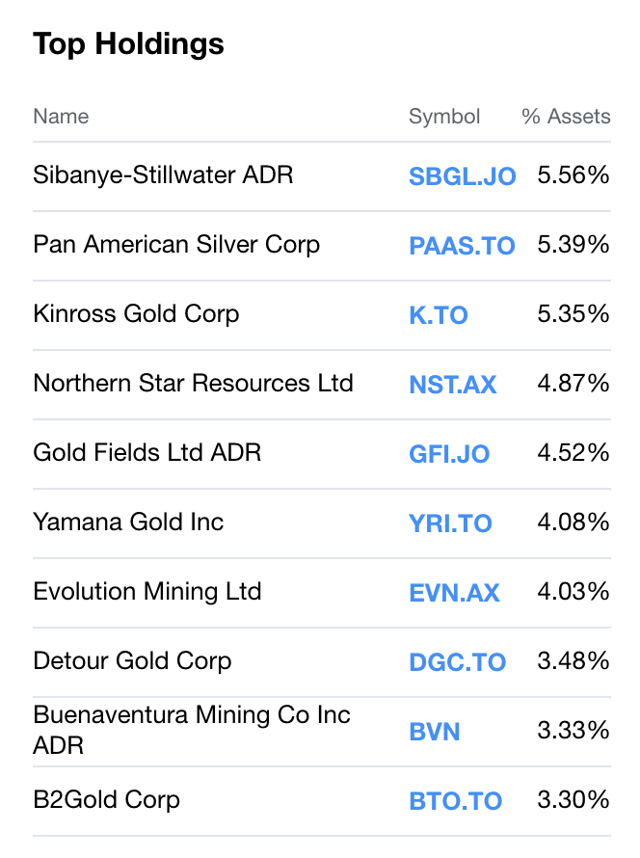 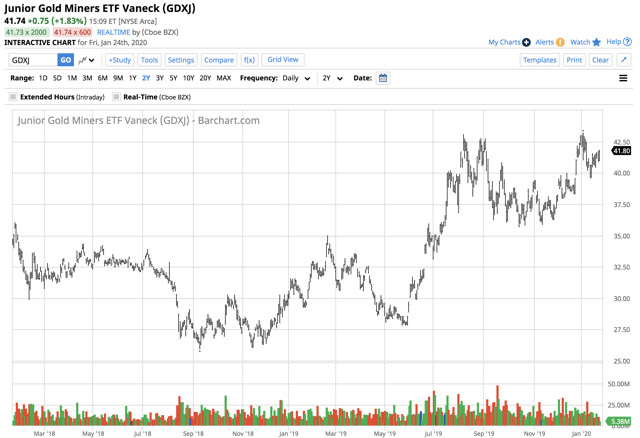 The chart shows that within the same time frame, GDXJ rose from $25.91 to $43.23 per share or 66.8% as it outperformed the yellow metal on a percentage basis. If gold is heading for higher highs, junior gold mining shares are likely to continue to provide a leveraged return compared to the precious metal.

The trend in gold is higher, and all signs point to a challenge of the 2011 record peak in US dollar terms.

The author is long gold