The Invesco BuyBack Achievers ETF (NASDAQ:PKW) with $1.4 billion in total assets invests in U.S. companies that have repurchased at least 5% of shares outstanding over the past year. The strategy is based on long recognized research that suggests companies that buy back shares tend to outperform their peers on average in subsequent periods. Indeed, over the past decade, the PKW ETF has outperformed broad market indexes like the S&P 500 (NYSEARCA:SPY), including 2019 when it returned an impressive 34%. That being said, we highlight some weaknesses in the fund’s strategy as implemented, which makes it unclear if the actual excess return is attributed to the buybacks strategy, or if the fund simply benefited from what was a strong market environment and relatively concentrated portfolio. This article takes a look at the PKW ETF and why we don’t recommend this fund.

Investing in companies that buy back their own shares is intuitive as it represents a direct source of shareholder return. As the overall share count is reduced, each share held by investors represents a larger interest to the overall equity all else equal. In subsequent periods, companies are able to generate higher per share profitability metrics for a given level of earnings. There’s a separate debate if corporate buybacks are indeed the best use of capital with the alternative being more direct investments towards growth opportunities. This conclusion will often depend on a case by case basis and company-specific factors.

Our view is that if a company conducted buybacks and the share price has moved higher, then the strategy was effective. Still, there are plenty of examples of companies that buy back shares, but stock price trends lower regardless, so it’s not always a sure thing. Among many academic researches published on the topic, a study in the Journal of Financial Economics found that stocks on average with ongoing buybacks exhibited an excess return over a four-year period from the initial announcement.

While much of the academic research surrounding the effectiveness of share repurchases often times points to the performance of the stock from the announcement date of a new buyback program, PKW and its tracking index only add or delete stocks once a year in January. In this regard, it’s unclear how much of the strategy alpha is missed from the initial announcement or commencement of company share repurchases. It could be many months following a buyback announcement or the actual open market activity before the stock becomes a component of the ETF. We believe this is a weakness of the fund’s strategy. 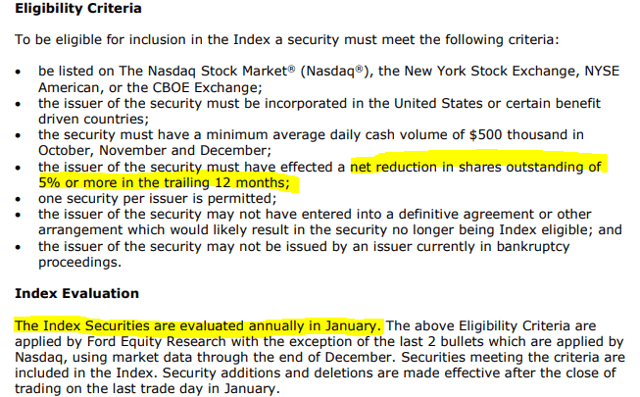 The other side to this argument is that companies often times have recurring and ongoing share repurchase authorizations. In this regard, PKW through its portfolio of 166 holdings acts as a sort of fundamental quality screen for companies that are both financially capable of share repurchases while inferring management’s opinion that shares may or may have been undervalued.

Recognizing that the PKW ETF has its own unique implementation of the buybacks strategy, the fund has at least delivered on the investment thesis with an impressive performance. Since inception in 2006, PKW returned 215% compared to 196% for SPY. In 2019, PKW climbed 34.1% on a total return basis ahead of a 31.2% return in the S&P 500. In the past decade, PKW managed to beat out the broad market index with a 269.4% total return compared to 252.8% for SPY. Over a 5-year cumulative basis, PKW has lagged the S&P 500 by 20.3% suggesting more mixed results recently. 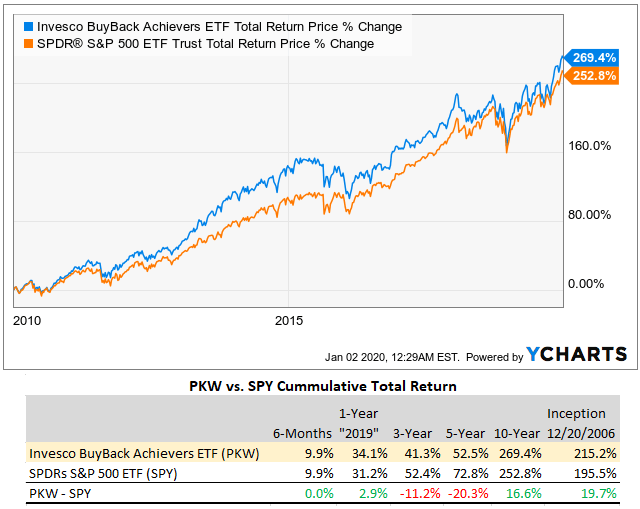 (Source: data by YCharts/table by author)

We include the S&P 500 as it shares a style blend between large cap value and growth similar to PKW with cross sector diversification. On the other hand, that’s not to say PKW is a world-beater. The Nasdaq-100 ETF (QQQ), for example, which focuses just on tech stocks, has climbed by a more higher 423% over the past 10 years with many holdings that do not conduct buybacks.

The challenge here is being able to decisively attribute PKW’s excess return since inception to the “buyback strategy”. The problem comes down to PKW’s specific construction methodology and timing implications. It also possible that the fund simply benefited from investing in a group of overall quality companies.

The table below highlights the top 25 current holdings in PKW along with performance metrics and the respective buyback yield for reference. Apple Inc. (NASDAQ:AAPL), for example, climbed 89% in 2019 while reducing its share count by 6.8% over the past year through the last reported quarter. Buybacks are simply one factor that supported its performance over the past year along with better-than-expected earnings and a more positive growth outlook. 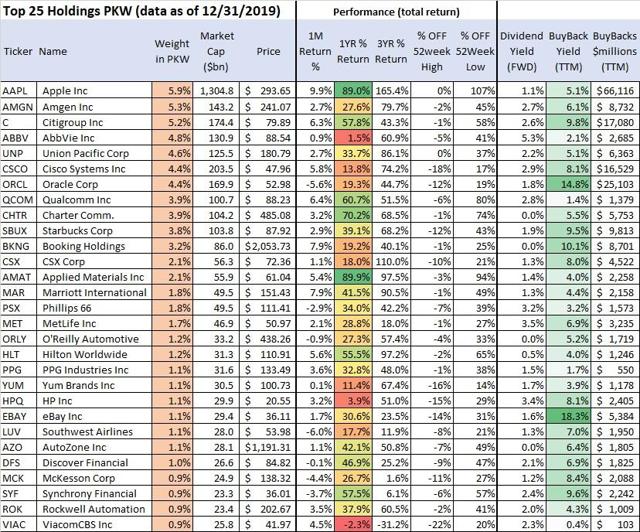 (Source: data by YCharts/table by author)

Buybacks as a Backwards-Looking Metric

An important distinction we highlight is that PKW’s tracking ‘NASDAQ US Buyback Achievers Index’ methodology is based on companies that have reduced their outstanding share count by 5% or more in the trailing twelve-month period. This is different from what is referred to as a “buyback yield”, which is based on the value of share repurchases compared to the current market capitalization. The buyback yield is more of a function of the stock’s price and can trend lower or higher based on the stock’s performance.

This dynamic is important as it highlights the sort of backwards-looking nature of focusing on buybacks as an investment strategy, which can sometimes misrepresent the extent or significance of the share repurchasing activities by a particular company. For an investor buying a particular stock today, there’s little to suggest buybacks conducted in prior periods are a bullish driver going forward. A stock with a high-trailing twelve-month buyback yield could simply mean the share price fell significantly over a period despite the company repurchasing shares. Prudent investors need to look into individual stocks to consider more forward-looking metrics such as the outstanding repurchase authorization and company-specific fundamental growth factors.

Take, for example, Qualcomm Inc. (NASDAQ:QCOM) with a 3.9% weighting in PKW. QCOM announced a significant $30 billion share buyback program in the second half of 2018, which at the time represented nearly 30% of the stocks ~$95 billion market cap in July of 2018. In Q3 of 2018 (fiscal Q4), QCOM repurchased $23 billion in shares during that quarter, while the buybacks have slowed to total less than $1.5 billion total in the period since. In effect, the share count fell by 14.6% before QCOM was added to the PKW ETF in January of 2019.

Based on PKW’s tracking index methodology, QCOM in 2020 no longer qualifies as a “buyback achiever” since the reduction in its share count occurred over a year ago. Clearly, shareholders and PKW investors won’t be complaining as QCOM returned 60.7% in 2019, but again, our point is to suggest that it’s difficult to pinpoint the exact source of return.

Another case we highlight is Intel Corp. (NASDAQ:INTC), which is not a current constituent of PKW. Just recently, in October 2019, Intel announced a major $20 billion share repurchase authorization with comments by management suggesting they intend to execute the majority of the amount by the end of 2020. The stock had a positive reaction to the announcement and has already climbed by 16% in the period since. It’s fair to question how much of the positive buyback tailwind has already been priced into INTC. We expect Intel to be added to the PKW ETF this year.

What PKW does well is that it aggregates stocks that are at least involved in share buybacks even if it doesn’t capture the initial market reaction to the announcement. Apple Inc. has climbed 165% over the past three years not necessarily because of its ongoing buybacks, but generally as a fundamentally strong company that generates significant free cash flow placing it into a position to be able to buy back shares.

We’re not convinced of the PKW buybacks focused investment strategy as implemented. We’d like to see some more flexibility with the possibility of adding stocks more regularly following new buyback announcement throughout the year instead of the annual index reconstitution. Investors also need to decide if PKW’s expense ratio at 0.62% for exposure to stocks that are already featured in many broad market indexes is justified. Take a look at the fund’s prospectus for a full list of risks and disclosures.