At The Energy Forum, we work hard to recommend quality energy investments. The world is based on energy consumption – it’s the highest correlated variable towards economic success. Two of the largest sources of energy in the world are oil and natural gas and, as a result, many of the companies which we recommend are oil or natural gas producers.

These companies can do many different things to maximize profits and FCF, however, at the end of the day, the basis of their profits are based on oil prices. As a result, it’s important to know the prevailing economic conditions when investing in the market. Here is my 2020 oil price outlook.

I recommend starting by reading my 2019 oil price outlook here.

I recommend signing up for a free trial for The Energy Forum to learn more here.

In early June 2019, oil prices crashed as a result of additional trade tensions picking up. I didn’t forecast this being as big of an issue and it pushed prices to an early-August low in the $50s per barrel. However, since then, with the exception of the Saudi Arabia attack, prices have recovered back towards $70 per barrel.

They’re currently ~$3-4 per barrel below where I saw them averaging but that’s the nature of a prediction and the prediction came quite close to being accurate.

Every year a host of firms try and predict oil prices for the next year. Of course, if they get it right, there is a significant amount of money to be made. Roughly $2 trillion of oil gets sold on an annual basis and if you can predict the price of that oil there’s billions to be made. 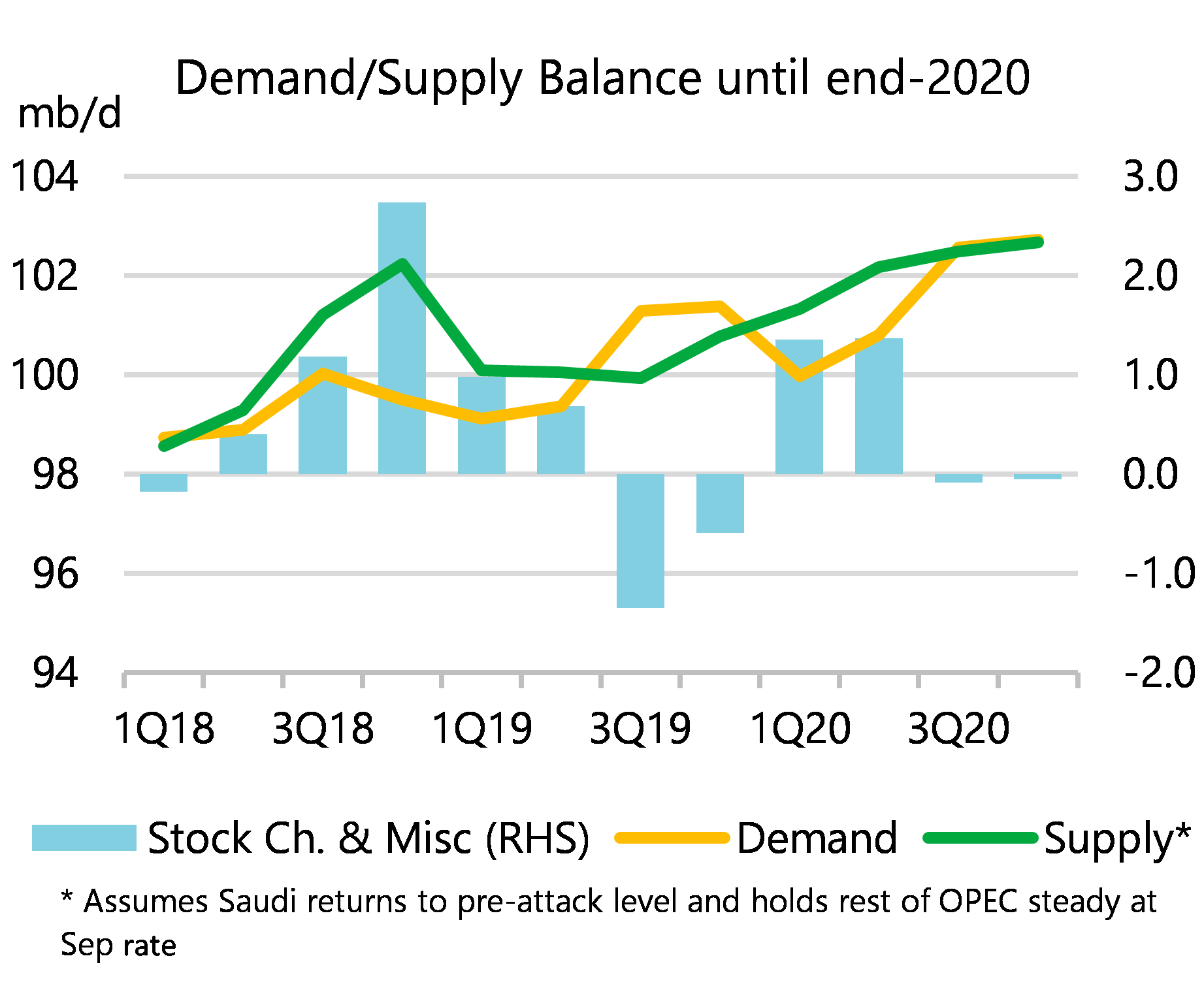 The above image shows the oil demand and supply balance until year-end 2020. These forecast show an uptick in demand in the middle to end of the year, as normally happens, bringing demand up to supply levels. More importantly, this uptick relies on OPEC holding steady at their September rate and Saudi Arabia production returning to pre-attack levels.

However, it’s important to note that this analysis does not include the December 2019 agreement by OPEC to cut production further by 500k barrels per day. That could point towards the demand supply balance being sorted out by mid-year along with a deficit going into the back end of the year, which is something worth paying attention too. 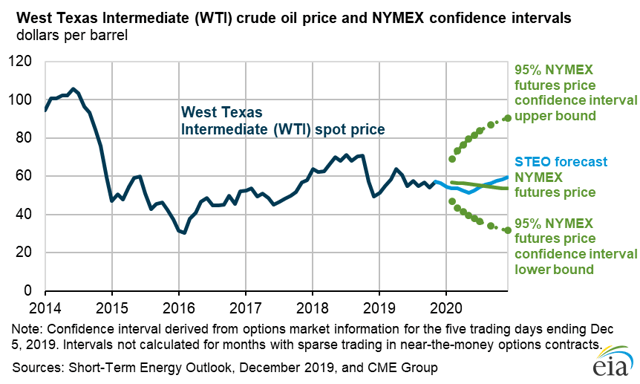 Currently, the EIA, as a part of futures pricing, is showing WTI prices at roughly $57-58 / barrel (corresponding to Brent crude prices at roughly $62-63 a barrel). The 95% futures confidence interval is huge, it’s predicting either a huge dip or a huge increase in oil prices, covering a WTI range from $30-$90 per barrel. Effectively it’s so huge it’s meaningless.

However, it’s worth knowing where current forecasts lie – or where the smart money thinks prices lie – as it’ll form the basis of much of our prediction.

Going into 2020, I think that oil prices will be determined by 3 main market effects. These are shale oil production, OPEC production cuts and Middle East turmoil, climate change turmoil.

However, current forecasts are that shale wells have not been producing as much as expected. Some analysts are forecasting shale oil growth to slow down to as much as 100 thousand barrels per day. That’s a massive 0.8 million barrel per day difference that could make a significant difference on the overall oil markets.

At the same time, OPEC production cuts and Middle East turmoil are another thing worth paying attention too. OPEC has announced recent production cuts and I expect them to continue those production cuts to keep Brent crude prices at least >$60 per barrel. They have lost some pricing power since the start of shale issues, but they still have a respectable amount.

Middle East Turmoil also remains a big issue here – Iraq and the U.S. seem to have worsening relations as recent protests outside the U.S. embassy showed. If Iraqi leadership takes steps against the United States, sanctions might be added. At the same time, U.S. Iran relations haven’t been worse in a long-time and Iran shows no sign of folding. Iran vs. Saudi Arabia tensions could exacerbate issues.

However, counteracting all of this is climate change and the associated fears. Climate change is arguably the single largest problem facing our generation. Obviously we can’t instantly get rid of natural gas and oil but as solar and hydro-power become more cost effective, power consumption begins to shift. On the worst end, growth has slowed down.

That slowdown in growth should be a strong negative on prices.

Putting this all together and we reach my forecast for prices. I’m forecasting an increase in oil prices to an average of $70 per barrel for 2020 (Brent crude). I think that investors tend to focus and pay too much attention to the negative risk and expect that the reluctance of people to change their lifestyles with maintain oil and natural gas demand.

At the same time, there are significant powers that need the financial benefit of higher oil prices, especially across the Middle East. I also think that the potential shale production issues are understated – they’ve been buoyed by low interest rates – but many wells aren’t profitable. That could help prices to increase up to the $70 per barrel average Brent.

Oil prices are notoriously difficult to forecast. My 2019 forecast lined up to where I expected it, however, I didn’t foresee the May 2019 weakness based on the trade war. Still prices seem on the path to recovery and my 2019 forecast average of $65 per barrel was near the overall 2019 average of $64 per barrel.

Going forward, forecasts for oil prices see them remaining mostly constant, or a potential slight decrease. However, I think that too many worries from investors towards the downside along with shale difficulties should actually push average Brent crude prices towards $70 per barrel. This could result in more profits for investors.

Let me know what you think in the comments below!

Regardless of your general investing goals, The Energy Forum can help you build and generate strong income from a portfolio of quality energy companies. Worldwide demand for energy is growing quickly, and you can be a part of this exciting trend.

If you’re interested in learning more, click here. If you have any questions, send me a PM.