Looking back at the decade of the “teens,” a significant number of U.S. retailers closed their doors, while others consolidated. Traditional retailers have been struggling. Spending has shifted to online retailers, local and organic businesses and groceries, and shoppers have chosen value/lower price points over brand loyalty. Millennials now make up a big portion of U.S. shoppers. Besides preferring experiences over things, millennials are also very tech-focused; mobile phones are important to them, underlining the importance of e-commerce and omni-channel initiatives – a significant expense for retailers. As a result, mall traffic and sales have declined, causing margins and profits to fall, and store to close.

Here’s what happened this past decade:

When looking at the Refinitiv Same Store Sales Index, the last decade posted an estimated 1.9% growth, which is slightly above the long-term average of 1.7% since we started collecting this data in 2004. Consumer spending was robust in 2018. The Refinitiv Same Store Sales Index posted an impressive 5.0% SSS growth in Q2 2018, the strongest showing since Q1 2004, when the index posted a 6.6% SSS growth. Since then, the index saw a 2.7% average SSS in 2019 and is expected to continue this trajectory into the beginning of the new decade.

The long-term technology investments in improving the omnichannel experience have been paying off at the discount stores. The sector has been outperforming the overall SSS Index since Q4 2016, and has posted a robust 3.4% SSS average since then. This is stronger than its long-term SSS average of 2.3% and its decade SSS average of 2.0%. 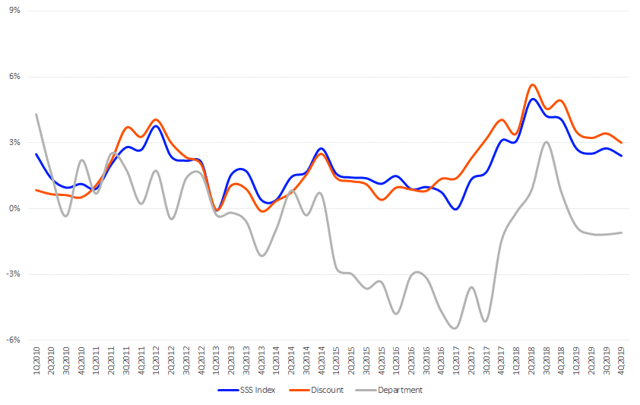 Online vs. brick and mortar

At the beginning of the decade, the advent of the Internet and smartphone technology had transformed retailers like Best Buy (BBY) into a victim of a phenomenon referred to as “showrooming,” in which customers check out the merchandise in person at a Best Buy showroom, then go to Amazon.com (AMZN) or some other online store to buy it at a lower price – initially paying no sales tax in the process. Many retailers also started to offer more discounts on shipping, or even free shipping at the beginning of the decade.

Although e-commerce transactions still make up only a fraction of total retail sales – 11.2% as of Q3 2019, compared to 4.2% in early 2010 – one thing is clear: the amount of money consumers spent online continues to grow. The trend has changed shopping patterns and likely will only increase. 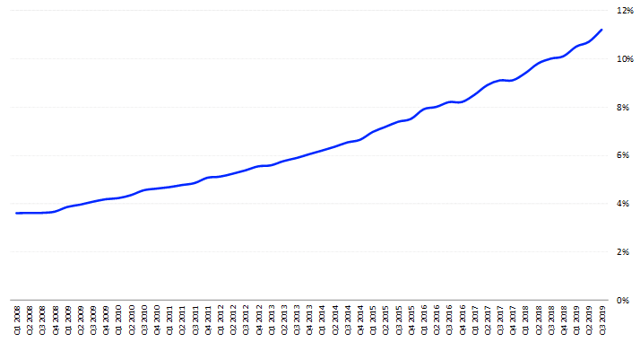 The Great Recession conditioned the consumer and reinforced this trend in the past decade: the last thing a consumer wants to do is pay full price, plus tax, and possibly shipping expenses for larger items. The value proposition has become key to the consumer, and they are rewarding retailers that are able to give them a fast and convenient way of shopping.

In the past, manufacturers and retailers controlled the consumer electronics market and, in particular, pricing. Thanks to technology, power lies in the hands of consumers this decade. Online retailers such as Amazon put more power in the hands of consumers themselves. Technology and smartphones, for instance, enabled shoppers to find the best deals, whether at Amazon itself or offered by one of its partner merchants. Standing in Best Buy and checking prices on Amazon? If you buy it right then and there on your iPhone or Android device, you’ll save an extra $5. (Oh, and Amazon is enlisting your help to keep track of its rivals’ pricing.)

The mid-value group, which includes the department stores, has been struggling the most in the promotional environment. And in order to survive the most crucial shopping season of the year – the holidays – they continue to increase the amount of merchandise on sale, as Refinitiv discovered in a collaboration with StyleSage Co., which analyzes retailers, brands, online trends and products across the globe. When looking at the most recent Black Friday holidays, the discount penetration spiked to its highest level in 2019, suggesting that 74% of department stores’ merchandise was on sale. 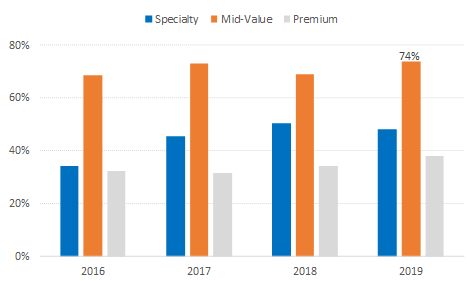 MarketPsych Indices from Refinitiv scour the news and other media constantly. They analyze it and extract meaning. And they give it to you straight – in numbers you can use to drive profitable decisions.

Below is a ranked list displaying equities with the highest average sentiment scores over the past decade according to the MarketPsych Indices. This particular index provides a more organic view of which companies are connecting emotionally with their customer base.

The retailers in the list below show the most-loved stores in our Refinitiv Same Store Sales Index since 2010. The results underline the importance of the value proposition to consumers. Especially since TJX, CHS and ROST were the top-loved stocks over the past decade, showing that shoppers love the deals there.

Exhibit 5: The Most-Loved Retailers in the Refinitiv Same Store Sales Index: Over the Past Decade

The latest reading on consumer confidence shows that consumers are feeling very secure about their personal financial situation. “The end of the year appears to have sparked optimism about the future among consumers despite the current political economic tension and uncertainty,” reports Chris Jackson of Ipsos. “Americans’ current confidence in the economy remains unchanged; however, as we look towards the new year, we see greater optimism particularly in our own personal financial situation.” 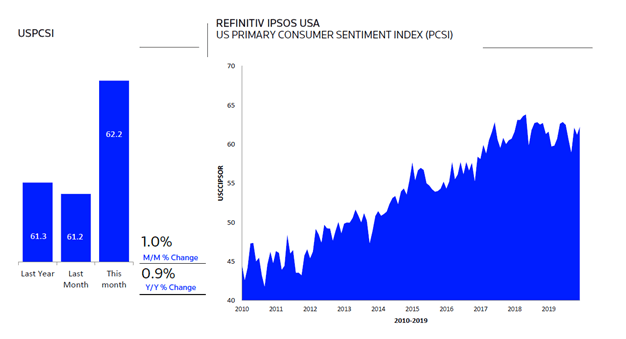 Still, this decade experienced a considerably high number of store closures. As a result, Wall Street is wondering if, once the holiday season is over, the retail sector will see more casualties.

For this we turn to the StarMine Combined Credit Risk (CCR) model, the most comprehensive StarMine credit model.

According to StarMine, beware the department stores and listen to the saying “Never try to catch a falling knife.” The bulk of these stores score in the top decile on the Relative Valuation (RV) model, but there’s likely a reason their stock prices appear cheap. According to the StarMine Combined Credit Risk (CCR) model, the most comprehensive StarMine credit model, the department stores may be in danger of default in the next year.

Last year, most of these department stores had been in the riskiest quartile of all retailers likely to default. This year, however, those scores have fallen lower, placing most of the retailers in the bottom decile.

Six out of seven stores rank in the bottom of the StarMine CCR model score. These scores correspond to implied credit ratings of CCC- or worse, suggesting the stores are not financially stable. For example, Macy’s (M) has a score of 8 corresponding to a BB- implied credit rating, according to the model. And the fact that the CCR scores continue to fall suggests that the danger of default has become greater.