The haven-linked US Dollar gained this past week against its major counterparts. Its strength also extended into some of its ASEAN peers such as the Singapore Dollar, Malaysian Ringgit, Indonesian Rupiah and Philippine Peso – as expected. The key fundamental development that has helped sustain its advance is rising concerns about the impact of the ongoing coronavirus outbreak on global growth.

This was mentioned in detail this past week by the Bank of Indonesia, which cut its benchmark 7-day reverse repo rate to 4.75% as expected. USD/IDR rose after the central bank raised worries about a slump in trade and tourism. In fact, the nation’s trade deficit unexpectedly swelled in January as exports contracted 3.71% y/y. Global growth estimates were also lowered to 3% from 3.1% with the CPI target in 2020 between 2-4%.

Market mood – which is often a key determinant of trends on average in USD/SGD, USD/MYR, USD/IDR and USD/PHP – noticeably deteriorated this past week. This followed Apple Inc. anticipating to miss near-term revenue targets and China failing to impress financial markets with enough easing. At one point, USD/SGD temporarily spiked as much as 1.1% as risk aversion picked up in Asia Pacific trade.

What is the road ahead for the US Dollar? 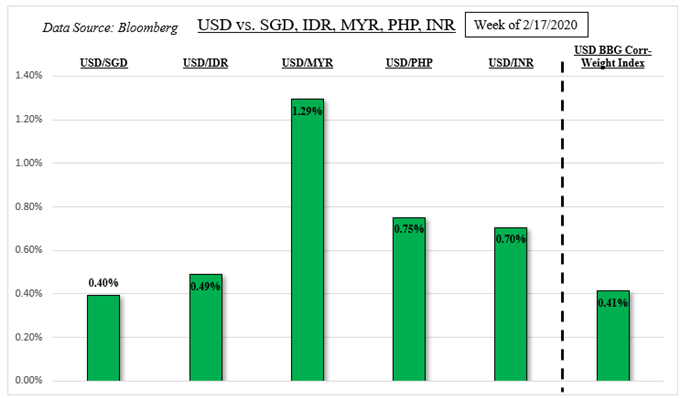 Haven-Linked US Dollar May Gain if Risk Trends Continue Deteriorating

Keeping a close eye on sentiment will be key for the highly-liquid US Dollar amid the Wuhan virus outbreak. On the next chart below, capital flows into emerging markets have reversed course since January. These are closely tracking the MSCI Emerging Markets Index (EEM) which is an overall barometer for risk trends in developing economies. The EEM is now off about 6.5% from the peak earlier this year.

Another crucial development that poses as a downside risk for equities and sentiment is a slowdown in the swelling of the Federal Reserve’s balance sheet. Since the central bank began aggressive intervening in overnight lending markets, liquidity and credit conditions have seen a general boost. The Fed has reiterated on plans to ease the pace of repurchasing operations. That may weaken ASEAN FX, sending USD/SGD up.

In fact, the central bank’s balance sheet contracted slightly this past week as the S&P 500 declined over one percent. Keep a close eye on commentary from Fed officials ahead such as from Loretta Mester, Richard Clarida, Charles Evans and James Bullard. Loretta Mester particularly highlighted how policy should not yield to markets if views are not in alignment. The markets are now almost fully pricing in 2 cuts this year. 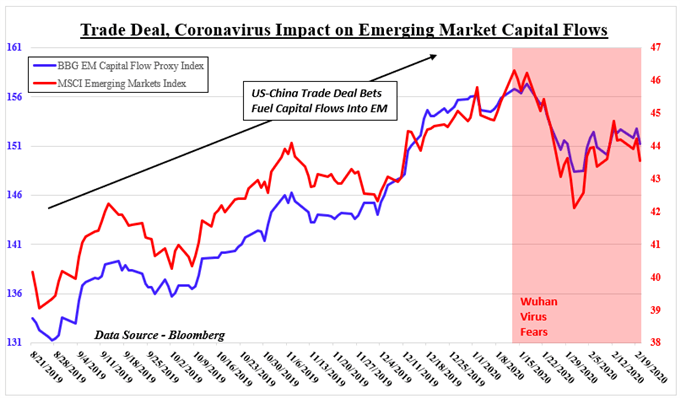 Turning to the regional ASEAN docket, Singapore CPI data will cross the wires early into the week on Monday. A softer-than-expected outcome risks underscoring the shift to a more-dovish tone from the Monetary Authority of Singapore. Then on Wednesday, USD/SGD also has Singapore industrial production to keep a close eye on. Outside of ASEAN, there may be some headline news elsewhere in emerging markets.

U.S. President Donald Trump is traveling to India for talks with Prime Minister Narendra Modi. Trade tensions between the two countries elevated last year when both sides threatened to slap tariffs against each other. Mr Trump did hint that there may not be an agreement until after this year’s presidential election. As such, scope for follow-through if markets rejoice their meeting could be lacking as USD/INR focuses on stagflation risks.

What Do Other Traders Buy/Sell Bets Say About Price Trends?

With the U.S. economy still on a relatively stable footing, signs of weakness that underscores 3-year low growth rates may boost the US Dollar. Last week, Markit Services PMI unexpectedly shrank to the lowest since 2013. Consumption is around 2/3 of local GDP, making hesitant consumers the single-largest risk for the economy. Keep a close eye on consumer sentiment and the Fed’s preferred measure of inflation – PCE.