It’s long been known that the returns on sin stocks – gambling, booze, tobacco – are higher than those on more standard portfolios. The reason being that some won’t buy such stocks for moral reasons and their lack of purchases drops the price. That means that yields are therefore higher, yields operating as the inverse of the price.

The question then becomes well, does that increase in the yield overcome our distaste at the moral position? As with most things this depends upon what the price is, what the moral is and the confluence of the two. Yes, we all like to think that our moral positions are adamantine and yet given enough money they tend to be a bit moveable. That Demi Moore movie, she might have slept with Robert Redford for the fun of it, maybe for the million dollars, but definitely not for $50.

So, at what price do we care more about the money than the other things? Maybe 8.7% in a secure stock is when?

We’ve long known that tobacco stocks are good defensive stocks simply because demand for the product doesn’t move much over the business cycle. Those who smoke do and while their number decreases every year it’s a managed decline. Equally, smoking rates don’t go up in a boom. Demand is, in fact, near perfectly inelastic over said business cycle.

There is thus near no connection between profits and the state of the economy. In this sense they act more like bonds than much of the rest of the stock market. Do note, only a bit, they are still stocks and do still fall in the bad times like now.

That movement in the price has caused this on the yield: 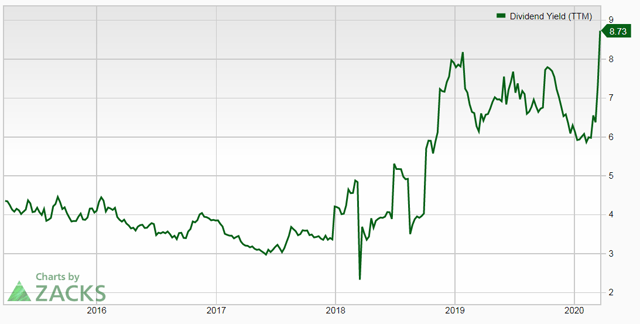 We’ve also just had the results for last year:

That’s an exotically high debt level but then for a company producing something inelastic to the business cycle – and at those gross margins – a level that’s entirely supportable. It’s also true that given the coronavirus interest rates are declining and none of us expect them to move up any time real soon now. Yes, obviously, debt has been issued at whatever coupon it was issued at but we’re not thinking that there’s going to be any issue with having to pay a higher price to refinance any time soon.

We also have this:

Yes, this is a fairly skimpy analysis. But then the tobacco industry doesn’t need much more than that. For the established players it’s a fairly simple business. Those who smoke do. When they die out there will be fewer, but that’s already built into our pricing here. The industry as a whole is on a managed decline over the decades.

In the interim the stocks carry decent dividend yields. And, for as far as the eye can see, they’re going to continue to do so.

The twin issues are, well, how high is that yield? And, given that height, does this overcome any moral scruple we might have about profiting from the tobacco business?

My answer is that at 8.7% then yes, that will tip it over the edge for some number of people. Possibly us.

A down market is the very time to be building that portfolio of solid income stocks for the long haul. Dividend yields like this on such defensive stocks come along rarely. BAT, as part of the long term portfolio, thus makes great sense.

Assuming that it’s the portfolio for the next decades being built BAT is a good addition at these prices.

Knowing how to control emotions while trading can prove to be the difference between success and failure. Your mental state has a significant impact on the decisions you make, particularly if you are new to […]