In October, I wrote about the Southern Company (SO) and advised investors to “Take Some Chips Off The Table Now” when the price was around $61.

While I couldn’t have known that 6 months later we would be facing an unprecedented health and economic crisis, I concluded that the stock was vastly overvalued. Naturally, with the markets in euphoria mood, the stock raced to over $71 and then started to crash down hard over the last 10 days, hitting a fresh 52-week low today below $43.

With the stock having come down that much while at the same time the utility sector should be expected to be relatively insulated from the projected downturn, I believe it offers a good entry opportunity.

What is going on at Southern Company?

Southern Company’s latest earnings for Q4/2019 were reported on February 20, 2020, just days before the markets started to nosedive. After an initial strong rebound in utility stocks as the markets declined, the bear also caught this relatively safe sector, sending stock prices plunging across the board.

As regards Southern Company, I believe a significant part of that sharp stock price decline is due to the fact that the stock has run so hot before. It was beating the market and the sector over any time interval within a 1-year period by some magnitude. 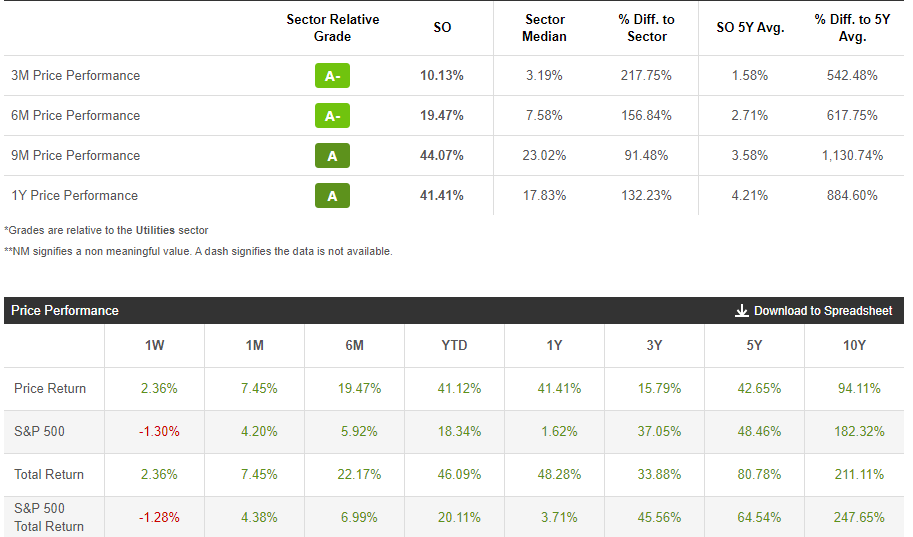 The picture today looks much different, with the company’s YTD price return of -27.2% just shy of the market’s fall of -28.6%.

Southern Company’s latest earnings featured in-line EPS and a relatively significant revenue miss as revenues declined 8.1% Y/Y. An over 8% revenue decline for a stable utility is unheard of if it were organic, but in this case, it was largely the result of the company’s dispositions of Gulf Power and other assets during the year. While I couldn’t find any precise revenue figures that detail the impact of these transitions, there is data to show the impact on EPS. 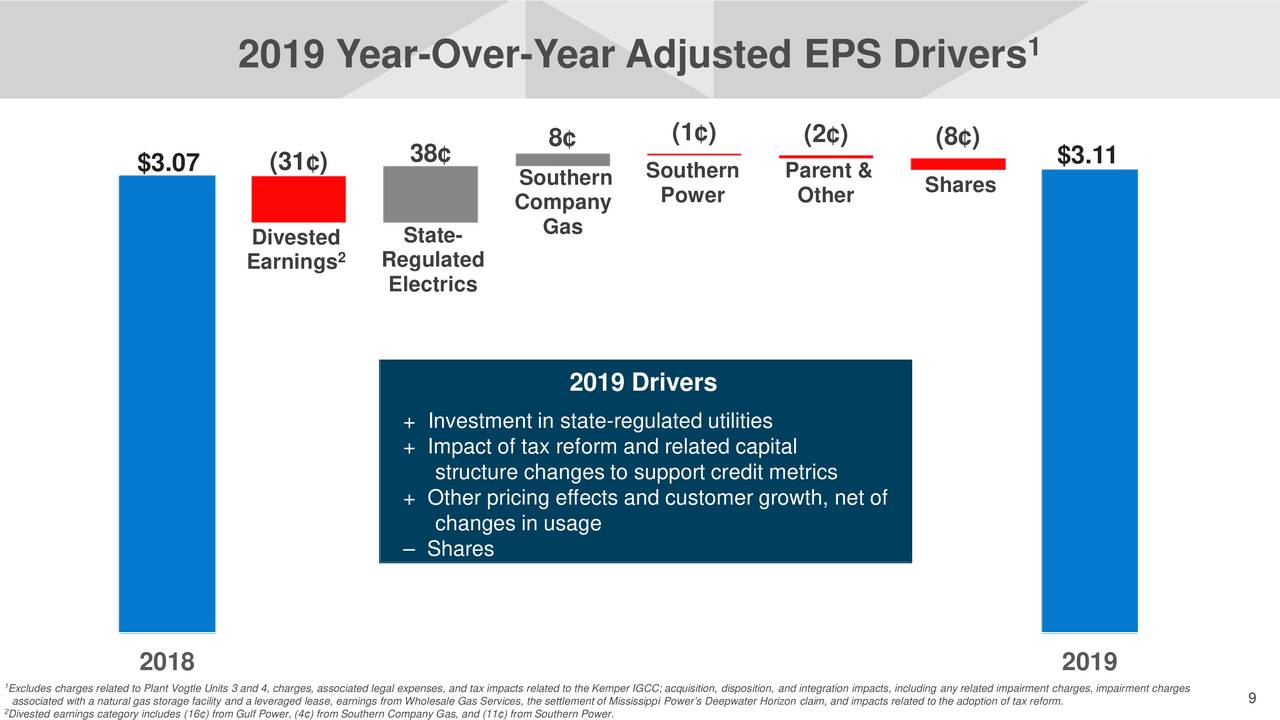 What’s more important is that the construction of Vogtle nuclear plant reactors #3 and #4 remains on schedule for regulatory-approved in-service operation dates set for November 2021 and 2022, which would mark the first time a U.S. nuclear power plant has been completed since the 1990s. This is especially comforting given major cost overruns in the past during this project under the company’s former and now bankrupt contractor, which even forced Southern to issue equity to help fund these costly mistakes.

By end of January 2020, Unit 3 direct construction is 85% complete and remains firmly on track to meet the refined schedule Southern Company defined in April 2019.

And as recently as last week, the company’s CEO assured investors that construction is going well and not experiencing any meaningful slowdowns due to the coronavirus, at least not yet. Now, with the pandemic continuing to spread and Spring Break going on along the East coast, this could also mean that the situation for Georgia, where the plant is being built, could change. However, right now, Georgia isn’t a hot spot of COVID-19 cases in the U.S., as cases have reached 620, placing it at #12 in terms of cases by state. 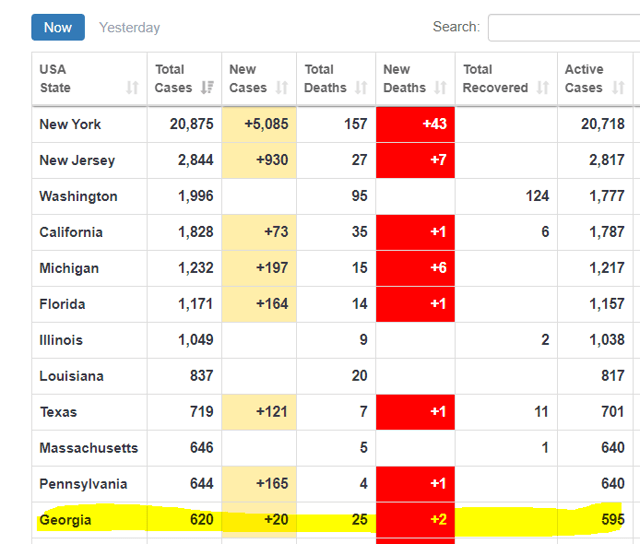 At this stage, it is difficult to say how exposed Georgia is really is given the chronic testing difficulties in the U.S., but in the worst case, Southern Company could probably even arrange for workers to live on-site for a limited time in order to continue construction. If that does not work, it would obviously impact the schedule and could jeopardize the expected in-service dates, but given the overall scale of this crisis, that would be a relatively minor problem and shouldn’t add even more downside to the stock, which currently sits at $44, down 38% from its high.

What’s more, the CEO also reiterated earnings despite a looming recession, as he sees that a “reduction in industrial demand for power” will be “offset by an uptick in residual consumption”. I am trusting the CEO on this one, as he has far better insights into the business and knows how much of revenue is actually based on fixed contracts. The markets are clearly disagreeing, and that presents a great opportunity.

Southern Company’s latest guidance calls for earnings between $3.10 to $3.22. At the mid-point, this means that the stock is currently only trading at less than 15 times earnings, representing a substantial reduction compared to the levels it was trading at before the crash ($71/3.16 = 22.5) and below its 5-year average of around 17 times earnings.

Meanwhile, the company’s dividend yield has shot up to over 5% and is currently trading at a juicy 5.7%, which is slightly above its 5-year average of 5.6%.

Long term, I am very confident about Southern Company once its Vogtle nuclear power plant is finally in service. The company will ride out this crisis and will certainly have enough liquidity to do so with $6.4 billion in cash on hand and a further $7.5 billion in committed credit facilities it could draw if really necessary.

While nobody knows where the bottom in this market is, investors also need to be aware that things could also turn around relatively quickly once bipartisan conflict over stimulus packages is overcome in combination with resilient results regarding an effective treatment.

I am sure I won’t catch the bottom, but by focusing on valuation and assuming that this virus will not shut down the economy to the degree we are currently seeing for several quarters, Southern Company’s valuation is sufficiently attractive to add to my holdings.

Usually, utility stocks are seen as recession-resistant, as people still need electricity and it is unheard of that entire sectors just shut down. This time, the market is expecting it to be different, and potentially even assumes that utility bills will be suspended, but even if that were the case, I am very confident that the federal government would then simply step in and replace this loss of revenue.

As a result, I think that the markets are overreacting and intend to use this opportunity to add to my holdings slowly, being fully aware that prices may drop further and could even sink the stock below $40 again.

If you like this content and want to read more about this and/or other dividend-related topics, please hit the “Follow” button on top of the screen and you will be notified of new releases.

Disclosure: I am/we are long SO. I wrote this article myself, and it expresses my own opinions. I am not receiving compensation for it (other than from Seeking Alpha). I have no business relationship with any company whose stock is mentioned in this article.

Additional disclosure: I am not offering financial advice but only my personal opinion. Investors may take further aspects and their own due diligence into consideration before making a decision