The coronavirus has caused a tremendous selloff in all markets, and CEFs have not been immune. But since many CEFs invest in assets that are very tangentially related to coronavirus risks as they currently appear, this means there are many income opportunities for investors who act fast.

Perhaps most astounding is just how sharply discounts turned. The average CEF discount was 2.8% on the close of trading February 21st, and that average discount fell to 7.5% as of the close of trading February 28th. Since the long-term average discount for CEFs is more around the 4% range, we can say that funds went from overbought to oversold very quickly when looking at the aggregate numbers – although this is exacerbated by some extreme cases.

For instance, the Delaware Investments Dividend & Income Fund (DDF) saw its astounding 40% premium crater to a 14.6% premium in a matter of days. As the third-highest priced CEF on a premium to NAV basis, this was unsurprising.

This means on a price basis, DDF amplified the S&P 500’s losses by a considerable margin, demonstrating the risks of holding CEFs trading at a high premium. 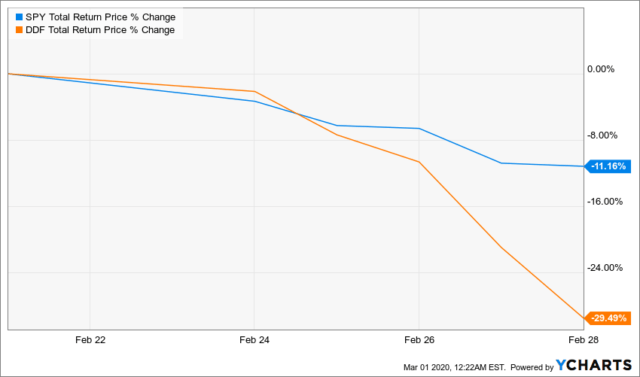 Not all premium-priced CEFs saw such a sharp nosedive. The most expensive CEF, the Gabelli Utility Trust (GUT), saw its over 50% premium barely move by the end of the week, staying over 50%: 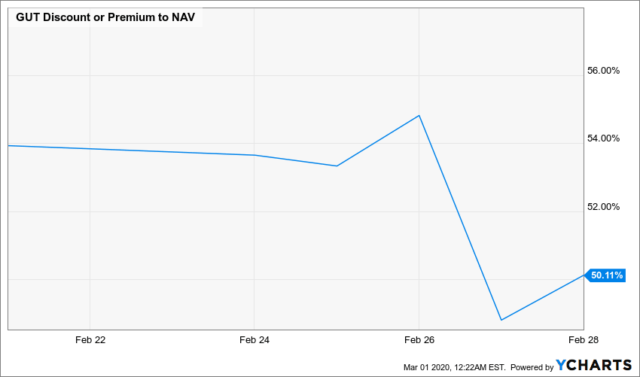 GUT’s price decline closely followed that of the index, indicating the sell-off was more driven by a NAV erosion than market panic. 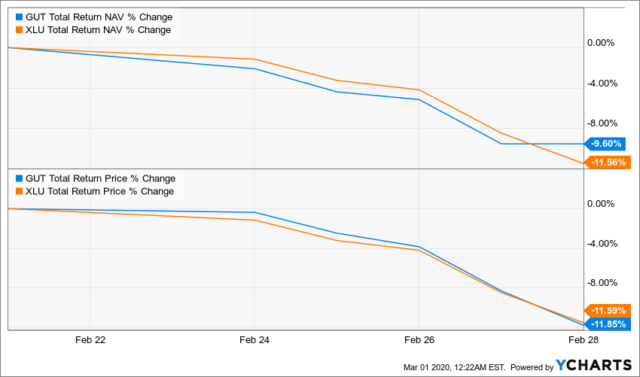 This is surprising considering the defensiveness of both CEF investors and utilities investors, but it is not replicated everywhere. On the 21st, utilities CEFs had a 4.9% average premium to NAV versus a 1.5% discount on the 28th, but this is in large part the result of a steeper decline in pricing relative to NAV among Reaves Utility Income (UTG), BlackRock Utility&Infrastructure Trust (BUI), and the Wells Fargo Advantage Utilities&High Income Fund (ERH). 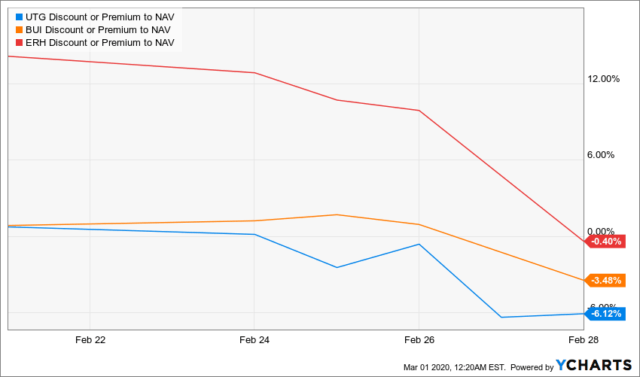 What is particularly interesting about this dynamic is that, on a NAV basis, there is little to distinguish the performance of BUI from GUT over a 5-day period. 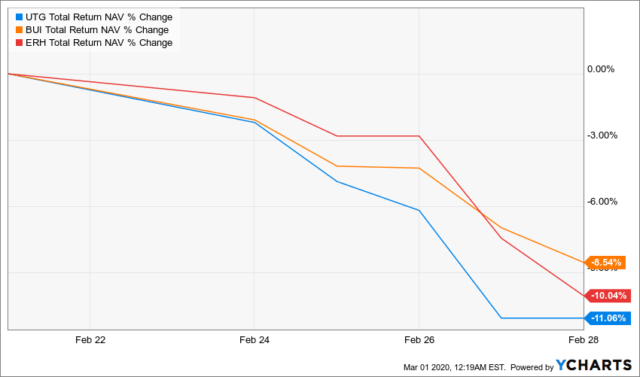 The lesson? Now is a great time to buy some utilities funds at an unusually attractive price, while another utilities fund is clearly still a very risky acquisition.

There is a broader lesson here, however. Because CEF pricing dynamics are the result of fund flows, and since fund flows are an exogenous random walk that cannot be predicted, they offer opportunities to rebalance from overpriced to underpriced CEFs when these disconnects first appear.

As attention is fixated on equities, investors are largely ignoring the very quiet week munis had, even by muni standards. 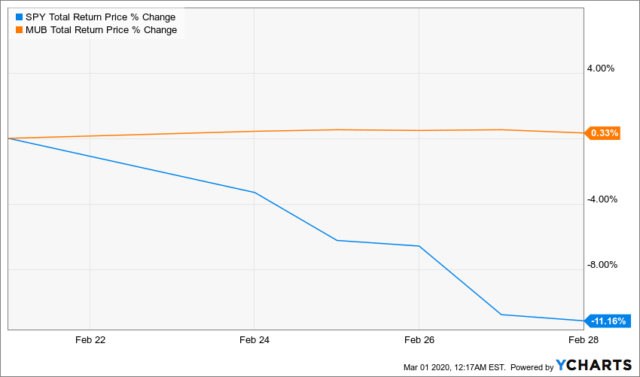 Muni CEFs went from a 3.5% discount on average on February 21st to 6.9% on February 28th, swinging from smaller than average to bigger than average very quickly. Again, this demonstrates the value of entry and exit points – and the potential to gain muni bond income right now.

To demonstrate this even further, consider the Eaton Vance Municipal Income Fund (EVN), a rather simple muni bond fund which started the week at a rather unremarkable 3.8% discount to NAV. Its discount is now in the double-digit range and is one of the highest in the muni bond CEF market. 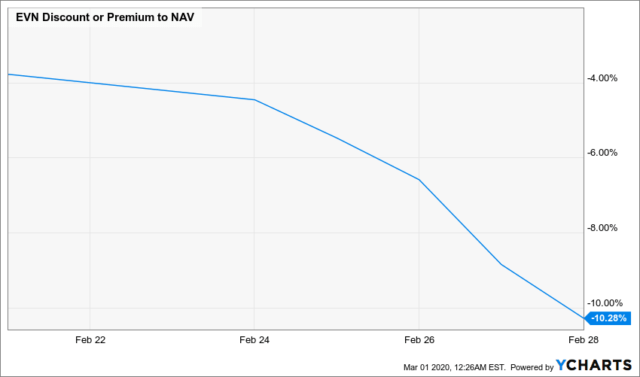 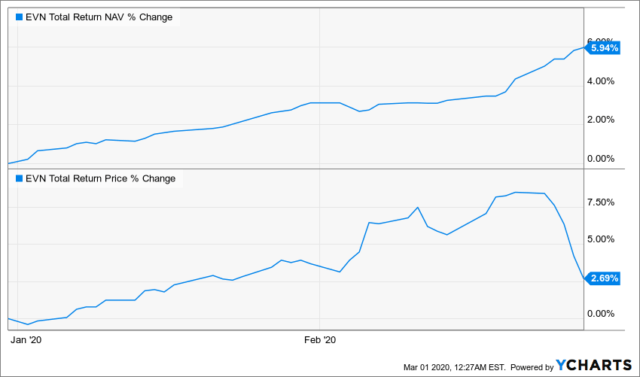 This is not the case with the highest price muni bond CEF, the Pimco California Municipal Income Fund (PCQ), which traded at a 29.8% premium a week ago and still trades at a 25.4% premium. PCQ’s NAV return remains strong and a bit better than EVN’s (6.8% versus 5.9%), but we can see that the market has already been correcting its very high premium since before the crisis began. 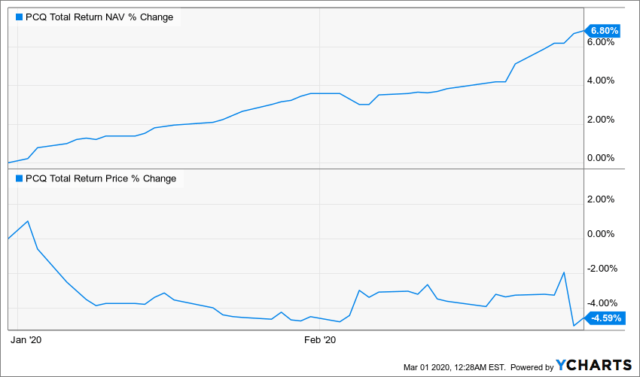 That PCQ has not corrected even further indicates greater room for the fund’s price to fall even if its NAV remains strong, whereas EVN’s is at an unusual low. 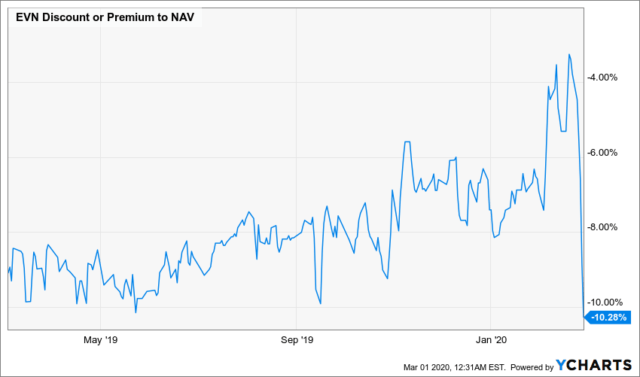 A quick look at munis and utilities CEFs demonstrates exactly how the radical and irrational selloff over the last week has created tactical buying opportunities in the CEF market, even if those opportunities aren’t as widespread as the aggregate numbers would lead you to believe. And now that average yields are 7.3% for CEFs, this is a rare opportunity for income investors to get into the market.