Aegon (AEG) is an integrated, diversified financial services group that offers innovative and effective savings and insurance solutions for customers worldwide. The company is our preferred Dutch life insurance company and serves more than 20 countries with almost 30 million customers. The reason we’re interested in this sector is that their dividend was recently suspended in compliance with EIOPA. We think that the current state of the stocks reflect an overly negative outlook on the dividend, which we believe to be rather safe and returning soon.

We analysed Aegon on a comparative basis against NN Group NV (OTCPK:NNGPF) to assess the pros and cons of the two life insurer companies to select the better of these two similar companies. We concluded Aegon was superior in terms of income potential due to its higher yield and higher coverage, and long-term growth exposure based on its geographical markets.

Both companies share a commitment to shareholders’ remuneration and have a progressive dividend policy, typical of companies with a cash-generative premium and claims model. 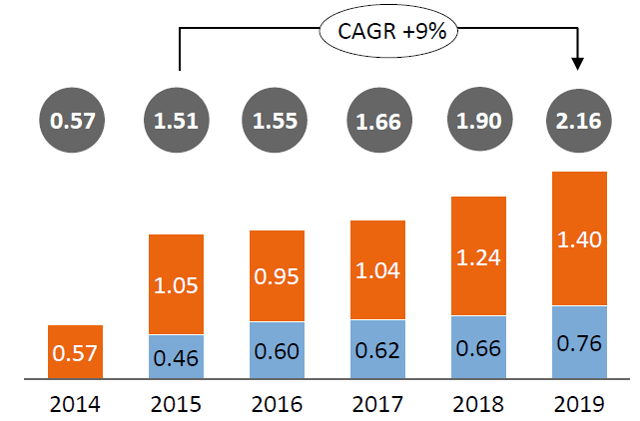 Although they both have a good track record for paying the dividend, in April EIOPA published guidelines advising insurers to suspend the dividend in the name of capital preservation to which both complied. We believe that the Dutch regulator will soften its decision about dividend remuneration policy soon, at which point both companies will resume dividend payments, even Aegon due to its favourable exposure to widening credit spreads in the Netherlands.

Assuming eventual resumption, Aegon is offering a forward dividend yield of around 14.2% with a payout ratio of 41%, while NN Group’s forward yield including buybacks comes to 12.39%. In 2019, NN Group’s total payout was a bit higher than Aegon, reporting a ratio of 50%. Aegon proves to be more optimally placed among peers at the intersect of dividend yield and dividend coverage, both on a cash flow and earnings basis. So even though both have sufficient capital buffers above Minimum Capital Requirement to weather a market downtrend, Aegon is more attractive from an income point of view in the eventuality that EIOPA reverses its guidelines.

We prefer Aegon’s exposure to India and China than NN Group’s exposure to Japan. Japan has a tenth of the Chinese population, and the penetration rate of insurance is also substantially higher (8% vs. China 4%). Given the substantially larger insurance market in China, and the longer relative runway for portfolio growth, China is a substantially more interesting market than Japan, which although stable is subject to unfavourable demographic trends and low rates of growth.

Another crucial point in the insurance sector mentioned earlier is the Solvency II ratio, which in this environment indicates the degree of quality of an insurance stock and the likelihood that they’ll be able to resume their dividends. Although NN Group has better figures than Aegon, with estimated SII ratios respectively at 212% and 198% for 2020, they are both above the minimal capital requirements with limited sensitivity as seen below:

Sensitivities of the Aegon Solvency II ratio to specified shocks

The risks are well illustrated by the sensitivity tables above. Adverse changes in the macroeconomic environment could impact the business indicated by the state of the solvency ratios, although these movements would have to be large. Moreover, Aegon in particular has some unattractive debt exposures in its investment portfolio in industries like consumer non-cyclicals and energy, all suffering in value due to COVID-19.

Currently, NN looks safer from a solvency ratio perspective, but from a shareholder remuneration policy perspective and considering long-term earnings power, Aegon is not only cheaper but more vigorous of a pick in this sector, and for that reason, it’s our Dutch insurance pick.

Key Talking Points: AUD/USD looks for further bullish momentum as it sets its eyes on the September high ASX 200 gets rejected at the 2020 opening level AUD/USD COULD FALL BACK INTO A RANGE The […]