US stocks (SPY, DIA, QQQ, IWM) are defying the tone of a down-drift set in the Asian (AAXJ) and European (VGK) markets, pressing higher and testing one-month highs in the process. 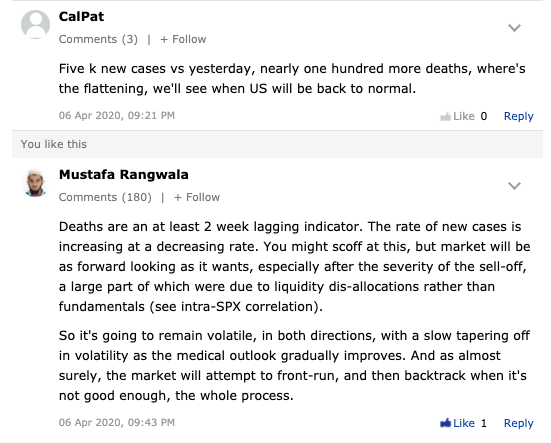 I like this pair of posts from the previous MVB. In the US, the worst of the raw case count may well be in the future rather than the past. It has really surprised me that, here in Spain where I am, the new-case count has managed to stay surprisingly strong even though we’ve been on lockdown since March 15.

Markets, ever the forward indicators, will do their best to get out in front of what is happening now and instead focusing on the general economic prognosis. It should also be remembered that what matters to investors and speculators is the prospects for financial health and performance of the companies they are analyzing. Some see-sawing and wide vicissitudes are all but certain, especially when vol readings are so high. 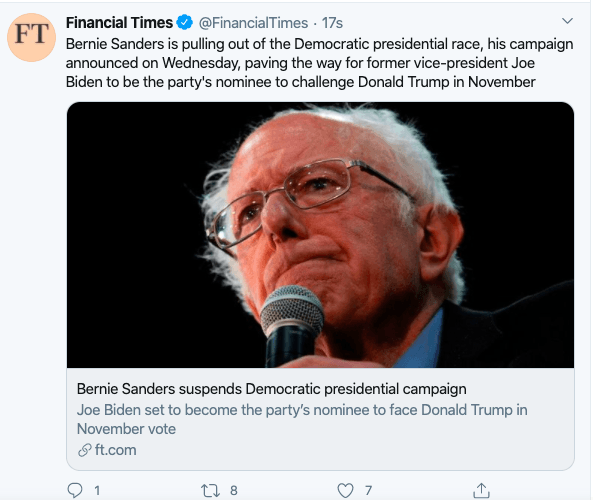 Love him or not, it appears that “President Sanders” is not in the cards for 2021; in light of his age (78), it seems somewhat unlikely that he’ll ever run again.

US markets appeared to get an extra jolt on the news; the presidential hopeful openly embraced the title of “socialist” (which is a pretty fuzzy term without some uniform meaning), and some of the candidates that advocated for measures such as a wealth tax have now dropped out of the race.

Battle lines are now certain to firm up, along with competing narratives on how the current crisis is being handled. This may add its own form of risks in its own right, and even before COV weighed heavily on the public conscious (at least in the US), the Nov (“X”) VX contract traded in an elevated state. 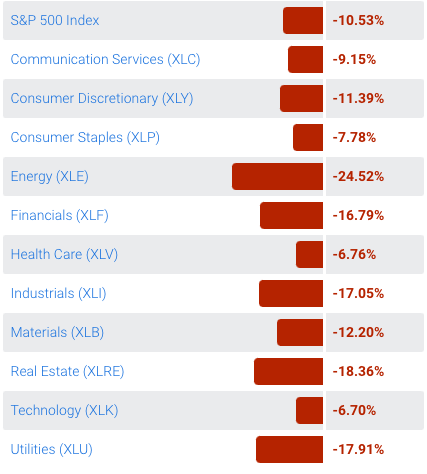 Above is the one-month tally by S&P sector. It’s no secret that stocks have enjoyed a very strong rebound over the last couple weeks, and so this is far from a “peak-to-trough” reading. The bull market officially died on March 9 of 2020, eleven years to the day after the 2009 bull was born.

To my way of thinking, one of the great hopes that the broader markets still have is that the behemoths in the technology (XLK, MSFT, AAPL) and communications (XLC, GOOG) hold strong.

The extraordinary moves seem to be abating, or at least the giant plunges. But to mount a convincing recovery, an empirically necessary (though not sufficient) requirement will be for the realized vol levels to taper down.

Investors are naturally looking for signs of recovery. An eleven-year bull has inculcated such thinking, and the nature of the disease perhaps lends itself to a mentality that “this too shall pass”. And it really might.

Days like Tuesday, however, should serve as warning that intraday moves can find themselves in a state of swift reversal. The rather sudden end-of-day spill explains why implied vols may not be in any large hurry to drop to more pedestrian levels. 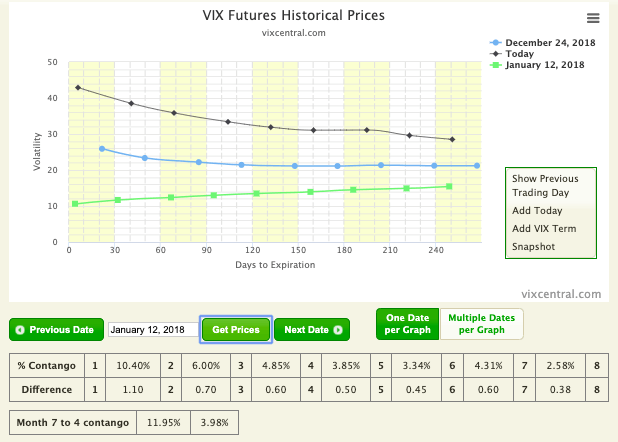 I’m going to wrap up today’s discussion with a comparison of today’s term structure (black) with that of the still-as-glass lows of January 2018 (green) and the raging “highs” of Christmas Eve, 2018 (spot VIX closed around 35).

It is tempting (and wholly justified) to compare today’s vol with the very recent past. But I want to emphasize that the VX term structure before us today is one that warns of very large market swings over the next several weeks.

As mentioned in the prior MVB, I am taking a good look at nibbling on some VXX, mostly by way of selling some reasonably deep OTM put spreads. The drop in vol needs to be respected, and I never believe in going “all in”, but letting the market make its way toward attractive price points while taking a stake in the process.

If this is your first time reading Market Volatility Bulletin, thanks for giving it a try. If you’re a regular, I thank you for your ongoing contributions in the comments section.