USD/MXN | At a Turning Point

The continued improvement in risk sentiment has helped the Mexican Peso recoup some of its recent losses, while month-end USD selling has also added to the move lower in USD/MXN. As such, with the pair failing on a third attempt to consolidate above 25.00 short-term risks are tilted lower. However, while questions may be raised as to whether USD/MXN is at a turning point, this will largely depend on the broader market. Oil prices will continue to trade in volatile fashion as storage capacity fills up, in turn, there is a possibility that front-month oil prices could be negative again. In this environment gains in the Mexican Peso will be hard to come by, particularly if price action in the front-month impacts oil contracts down the futures curve.

Mexico Peso Positioning: Investors have had a clear out in excessive long positions and thus positioning is broadly balanced. In turn, we would suspect that renewed weakness in the Peso would be a grind as opposed to a sharp move. 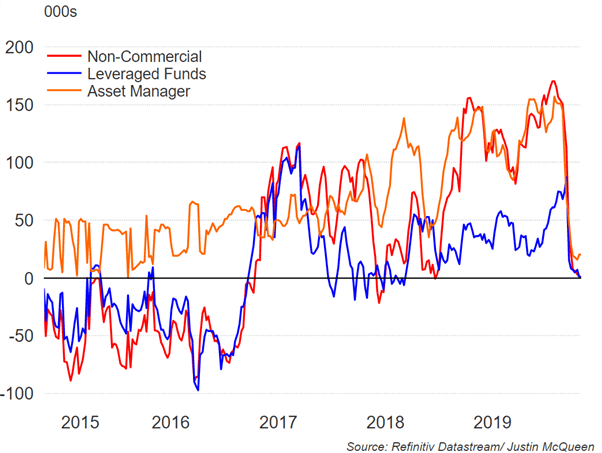 Short-term risks are tilted to the downside as USD weakness persists ahead of month-end rebalancing. In turn, near-term support in USD/MXN is eyed at 24.00, where a break opens the door to a test of the 23.6% Fibonacci retracement at 23.83. Alongside this, for confirmation that a triple top has been placed we look for a firm break below trendline support, failure to do so however, keeps the bullish uptrend intact over the medium term. 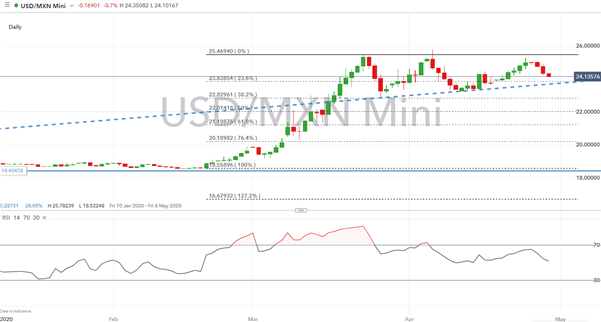