Target date funds (TDFs) came onto the 401(K) scene in 2007, catapulted by their anointment as a Qualified Default Investment Alternative (QDIA) in the Pension Protection Act of 2006. Subsequently, TDFs have grown from a couple hundred billion dollars to more than $2.5 trillion. They are huge. From the very beginning, glidepath designers had to grapple with the trade-off between growth and safety. Growth requires risk but comes at a cost in safety. TDFs are not the same for this reason, especially at the target date. Equity allocations at the target date range from 10% to 70%. Non-equities at the target date are mostly long-term bonds, which have become riskier as interest rates have plunged toward zero.

We now have more than 13 years of experience with TDFs, an experience characterized by a deep recession followed by a skyrocketing stock market and most recently a setback caused by a pandemic. There is enough life experience to make a judgment about what has worked best – growth or safety.

The lay of the land

The target date fund industry is an oligopoly, dominated by just 3 firms. The passive segment of the industry is monopolized by Vanguard. These 3 firms have chosen growth over safety, which is just fine, except surveys report that beneficiaries want to be protected at the target date and believe they are safe.

We also show the SMART Target Date Fund Index in the exhibit. These funds are our standard for safety; they are collective investment funds on Hand Benefits & Trust, Houston, a BPAS Company.

Here are the main points in this exhibit:

Safety doesn’t matter until it does

The decade of the 2010s was one of the best on record for stock market performance, so a growth objective was handsomely rewarded, to the detriment of TDFs with a safety objective. The highest performance rankings went to the riskiest TDFs. We forget the lessons of 2008-2009 when the stock market declined more than 50%. Here’s a reminder of how safety shined in 2008. SMART dominated. The “Industry” in the exhibit is the S&P Target Date Fund Index

The decade of the 2020s has begun with a reminder that safety counts. COVID-19 has caused a market decline and a recession, plus more threats lie ahead in this decade, complicated by 78 million baby boomers transitioning through the Risk Zone. 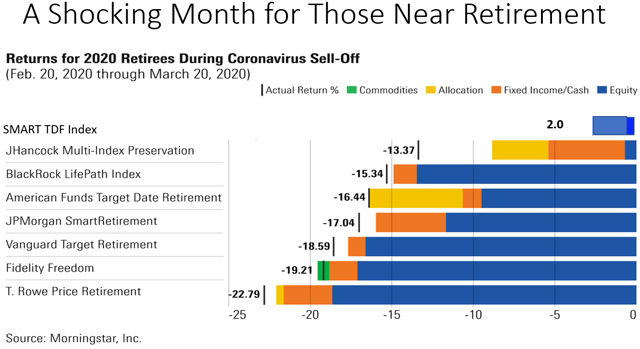 Which is the fairest in the land? 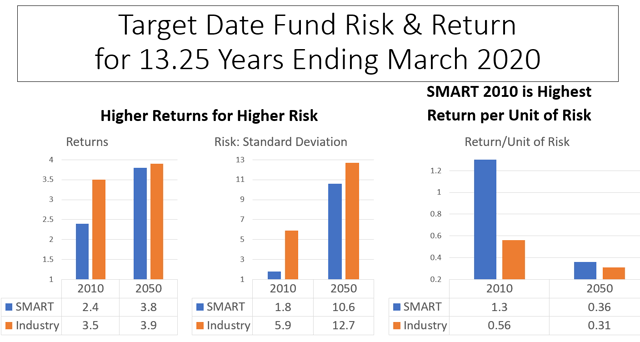 The trade-off between growth and safety is the classic trade-off between risk and return. Higher risk generally results in higher return, but is it enough to compensate for the risk? This question is answered with what is called a “Sharpe Ratio” that calculates the amount of return earned per unit of risk. As you can see in the following exhibit, the safe SMART 2010 TDF has delivered the highest return per unit of risk over the entire history of TDFs.

Details of the performance of growth versus safety are shown in the next graph. 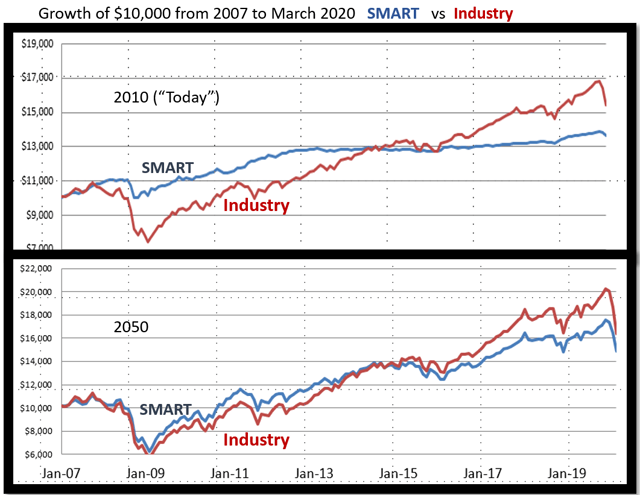 Because the near dated 2010 SMART Funds defended well in 2008, its performance exceeded the Industry for about 7 years, but nobody knew. Then the Industry’s concentration in US stocks overtook SMART. But the coronavirus put SMART long-term performance back in line with the Industry, literally overnight. The trend indicates the Industry crossing below the SMART asset level in the near future.

The long-dated SMART 2050 Fund has a similar story, but it has been its broad diversification that has made a difference, integrating alternatives like commodities and precious metals.

In the TDF performance race between growth and safety, it has been a dead heat. But the risk-reward competition has been decisively won by safety. The SMART Target Date Fund Index is the fairest in the land. SMART has won by not losing.

Additional disclosure: I am sub-advisor of the SMART Funds