On Tuesday, April 28, 2020, Norwegian telecommunications giant Telenor ASA (OTCPK:TELNF) announced its first-quarter 2020 earnings results. At first glance, these results appeared to be quite solid as the company posted reasonably strong year-over-year revenue growth although it does expect growth to slow down somewhat this year. The company’s profits were also relatively modest. A closer look at the actual earnings report does indeed show that there was quite a bit to like here, although the company does note that it has begun to be impacted by the COVID-19 outbreak. With that said, telecommunications companies are by their very nature more resilient to economic shocks like this than some other types of firms, which is certainly the kind of thing that we should appreciate when looking for safe havens to ride out the coming recession.

It seems likely that the first thing that anyone reviewing these highlights will notice is that essentially every measure of financial performance improved year over year with the exception of net income. One of the reasons for this is that the Norwegian krone, which the company reports its results in, declined significantly against many other currencies during the quarter and even over the past year. The Norwegian krone is generally considered to be a commodity currency as its value historically correlates with oil prices. This makes sense as oil is the source of much of Norway’s wealth. We all know that oil prices have declined over the past year so it makes sense that the value of the Norwegian currency would also be declining. The reason why this would benefit Telenor’s results is the fact that the company does business in many different countries, which use a variety of different currencies. Telenor’s customers pay for the company’s services using their own currencies, which Telenor then converts back to Norwegian krone for reporting purposes. If the Norwegian currency has declined in value then naturally these foreign currencies would convert into more krone and create the appearance of revenue growth even if the actual amount of foreign currency that Telenor collects remains static.

We can see some evidence of this by looking at the company’s subscription and traffic revenues, which are the monies that customers pay to the company to communicate with others and get other services such as television. In the first quarter of 2020, these revenues came in at NOK 23.9 billion, which represents a 17.16% increase over the NOK 20.4 billion that it brought in last year:

While this appears to be very strong growth, it was only 2% year-over-year growth if we look at the actual currencies that the company’s customers paid with. This illustrates just how far the Norwegian krone has fallen over the past year and also puts the company’s reported revenue growth into perspective.

As one might expect, one of Telenor’s most important markets is its home nation of Norway. The company managed to deliver growth in this nation. We can see this here: 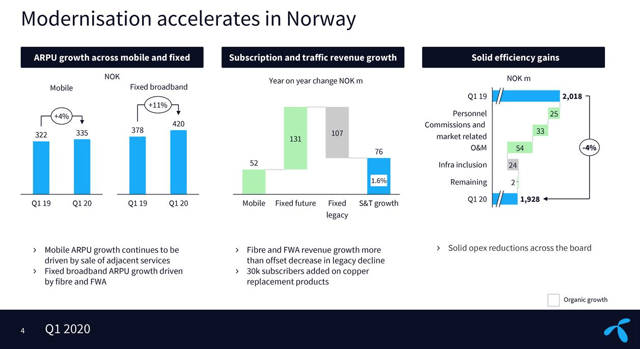 One of the reasons for this growth is that the company’s subscribers have been signing up for add-on services to the telecommunications packages that they already have. These include things like additional television channels, faster internet connection speeds, and similar things. This does make some sense given the COVID-19 pandemic as people that are stuck at home will want to enjoy the time as much as they can. While this has certainly been beneficial to the company, the shutdown of many businesses due to the pandemic has not been and Telenor did note a 1% drop in EBITDA during the month of March as a result of this. Overall, the company saw both revenues and EBITDA increase in Norway year over year, so clearly the positives outweighed the negatives here.

Another of Telenor’s most important markets is the Nordic nation of Sweden. Unfortunately, this is also one of the most competitive markets for telecommunications companies to operate in, as I have discussed in various previous articles. This is because Sweden is a highly advanced nation in which anyone that wants these services already has them. Thus, telecommunications firms are constantly cutting their prices or making other offers in an effort to get customers to switch providers. Telenor noted this in its earnings report, stating that churn was quite high. The company also noted that the revenues off of its mobile business in the quarter fell by 6% year over year due to this: 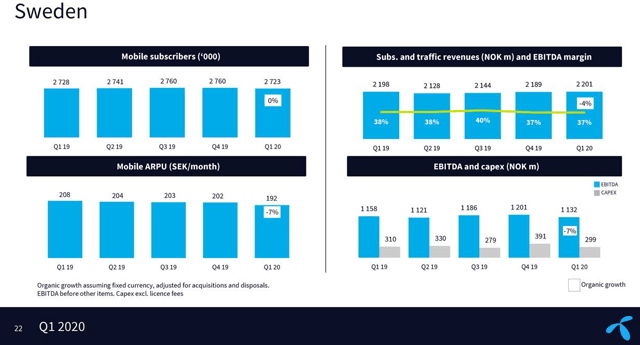 Unlike many other developed nations, Sweden never imposed a forced quarantine or other stay-in-place orders but many citizens of the country have been acting like they were in place. This had a negative impact on the company’s sales of things like smartphones and tablets in the month of March. Presumably, this is because people are hesitant to go into a store while the pandemic is going on. We can expect this problem to continue throughout the second quarter at least as the pandemic is still going on and nobody knows for sure when it will actually end.

Telenor is one of the few Nordic telecommunications firms that still has operations in emerging markets. This proved beneficial for the company during the first quarter as it delivered very strong growth in the Southeast Asian nation of Myanmar. The company managed to secure more than one million new subscribers to its mobile services and its existing subscribers consumed more data than previously. This is one of the big advantages of emerging markets as many of them have large populations that have not previously had access to these services, making it much easier to generate growth. 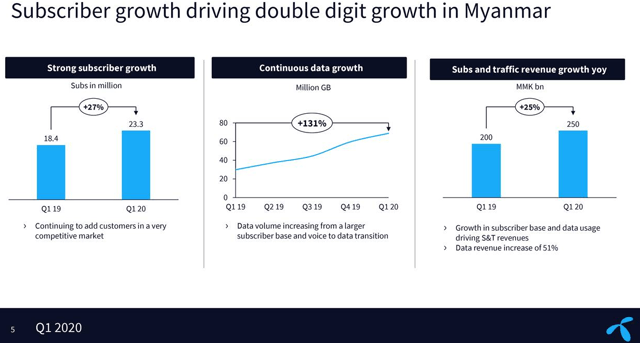 Telenor saw its subscription and traffic revenues increase by 25% year over year as a result of these new subscribers and the increased data use across its subscription base. The company managed to keep its costs under control in spite of this and thus was able to deliver year-over-year EBITDA growth of 31% in the nation. This was quite an impressive growth rate that far exceeds the rate that it would be able to deliver in any developed nation.

Unfortunately, Telenor did not see such strong performance in every emerging market in which it operates. One such market that disappointed was the Southeast Asian market of Pakistan. The company saw its subscription and traffic revenues decline by 11% year over year during the quarter, mostly caused by the Pakistani government no longer allowing the company to charge a service fee to its customers. This more than offset the increase that the company would have otherwise seen from the addition of one million mobile subscribers during the first quarter alone. Fortunately, Telenor was able to cut its costs in response to the lower revenues and thus mitigate some of the impact that the lower revenues would have had on the company’s profitability. Telenor reported an EBITDA of NOK 859 million from Pakistan in the first quarter compared to NOK 955 million in the prior-year quarter, which is only a 10.05% decline.

In conclusion, this was a reasonably solid quarter for Telenor and it certainly shows the ability of telecommunications firms to hold up much better than many other companies during difficult times such as these. This makes some sense as these are the companies that make it possible to work and otherwise live our lives remotely. With that said, they are not totally immune to the effects of the pandemic as we saw in the first quarter with equipment sales and revenues down. Overall, Telenor is holding up much better than a lot of companies in other industries, so investors should be reasonably comforted by that fact.

At Energy Profits in Dividends, we seek to generate a 7%+ income yield by investing in a portfolio of energy stocks while minimizing our risk of principal loss. By subscribing, you will get access to our best ideas earlier than they are released to the general public (and many of them are not released at all) as well as far more in-depth research than we make available to everybody. We are currently offering a two-week free trial for the service, so check us out!

Disclosure: I am/we are long TELNF. I wrote this article myself, and it expresses my own opinions. I am not receiving compensation for it (other than from Seeking Alpha). I have no business relationship with any company whose stock is mentioned in this article.