Blue Hat Interactive (BHAT) went public in July 2019 and raised $8 million in gross proceeds from the sale of its ordinary shares at $4.00 each.

While the company appears to have ample cash for an expected short-term drop in revenues, I believe the negative effects of the pandemic will continue to drag on sales and profits for an extended period, so my bias on the stock is Neutral.

Xiamen, China-based BHAT was founded in 2010 to develop and commercialize AR and interactive games, products that combine physical toys and mobile videogame features.

Management is headed by CEO and Director Xiaodong Chen, who has been with the firm since its inception and was previously general manager of Guangzhou Taihao Trading.

Blue Hat’s technology enables it to connect its toys with mobile devices through wireless technology, providing the user with an enriched user experience.

AR Racer, accounting for 57% of the company’s revenue in 2017, is a mobile vehicle racing game and is played by playing a small car onto the screen of the mobile device. Using photosensitive recognition technology, the car will respond with actions when the player encounters an obstacle.

The AR Need a Spanking is a combat game with an electronic ladybug-shaped toy that uses infrared induction technology to move along a designated area on the mobile device screen. The game accounted for 31% of BHAT’s revenue in 2017.

According to a 2018 market research report by Market Research Future, the global mobile augmented reality market is projected to reach about $70 billion by 2023, growing at a CAGR of approximately 61% between 2017 and 2023.

The main factor driving market growth is the rising adoption of mobile technologies and the emerging Internet of Things.

The North-American region accounts for the largest market share while the Asia-Pacific region is projected to grow at a faster rate due to the growing adoption of technologies, increase in smartphone users, launching of AR-compatible and integrated handsets at cost-effective prices.

Major competitors that provide or are developing mobile AR technologies include:

BHAT’s topline revenue by quarter has varied significantly over the past five quarters, as the chart shows below: 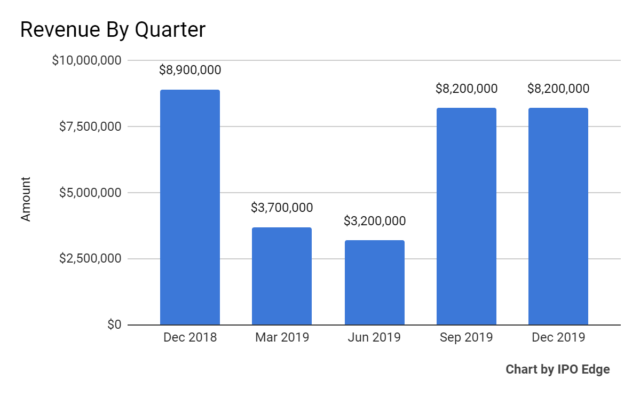 Gross profit by quarter has also fluctuated sharply over the same period: 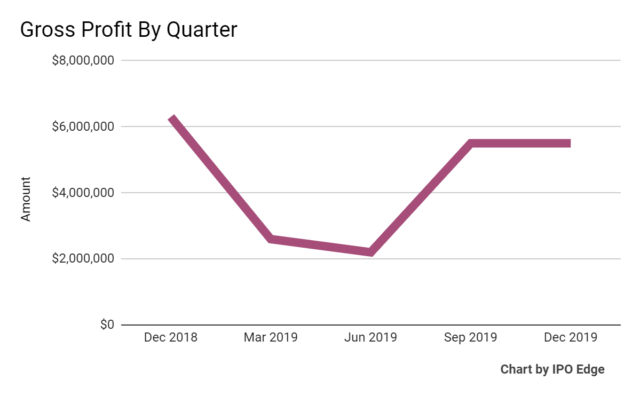 Operating income by quarter has varied significantly but remained positive: 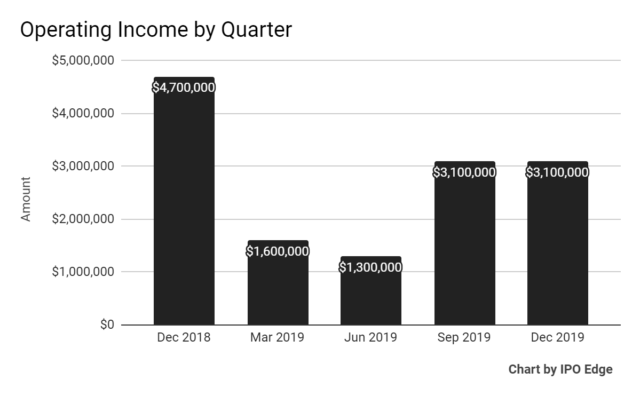 Earnings per share (Diluted) have rebounded in the two most recent reporting periods: 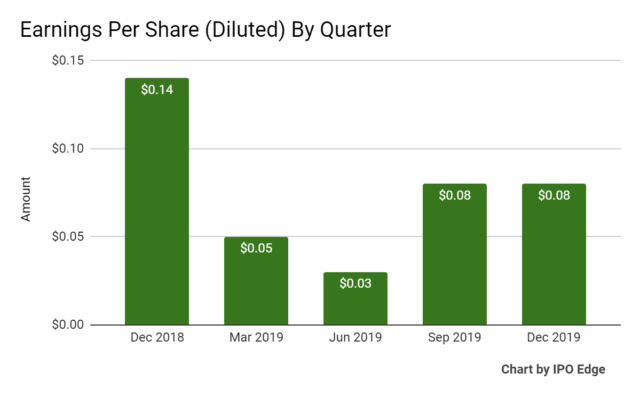 Since its IPO, BHAT’s stock price has dropped 80 percent vs. the U.S. Entertainment index’ rise of 11.4 percent and the overall U.S. market’s rise of 3.6 percent, as the chart below indicates: 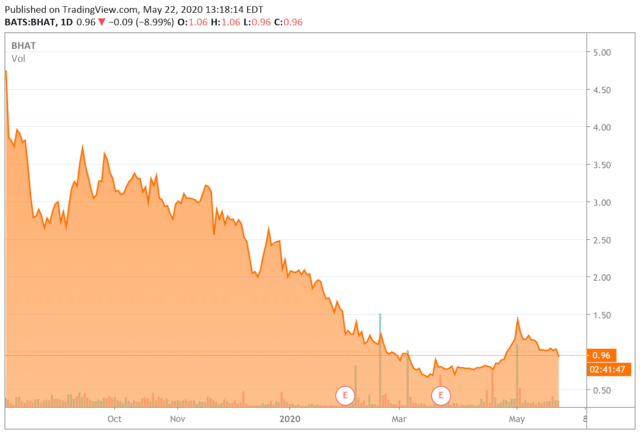 Below is a table of relevant capitalization and valuation figures for the company:

Below is an estimated DCF (Discounted Cash Flow) analysis of the firm’s projected growth and earnings: 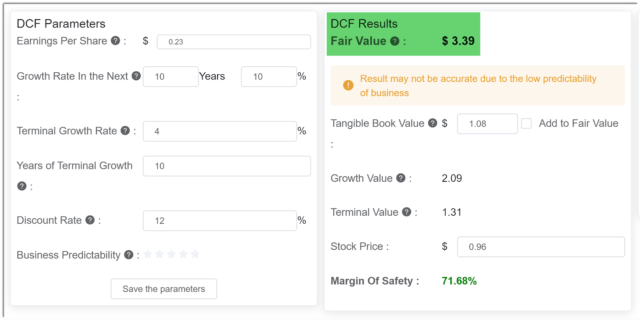 Assuming the above generous DCF parameters, the firm’s shares would be valued at approximately $3.39 versus the current price of $0.96, indicating they are potentially currently undervalued, with the given earnings, growth and discount rate assumptions of the DCF.

In its last earnings call, management highlighted a number of Q4 product launches and its diversification efforts into the education industry as a complement to its toys and games business lines.

In the U.S., BHAT received a patent for its ‘AR Racer core technology that connects the physical toy with the virtual content of a mobile game.’

As a result, management says it is in discussions with potential U.S. partners.

For its financial results, reporting delays recently hurt the stock temporarily. After management filed a delayed annual report, it appears the stock has rebounded somewhat.

2019 finished with revenues up 28.6% over 2018, due primarily to ‘increased sales of interactive toys in the games series category and mobile games.’

Gross margin was up slightly while operating expenses and R&D costs were up materially. Net income rose 14.9% in 2019 versus 2018.

Depending on management’s ability to reign in spending during the sales drop from the pandemic, the firm appears to have ample cash to weather the storm, as management indicates it doesn’t see negative long-term effects from the pandemic on its sales.

But, I believe the pandemic will continue to adversely affect sales and operations over the coming 1 – 2 year period.

I’m more doubtful of the pandemic’s lingering effects and as such, my bias on BHAT stock at its current level is Neutral.

Members of IPO Edge get the latest IPO research, news, and industry analysis. Get started with a free trial!

Central Bank Watch Overview: The trio of central banks overseeing the commodity currencies have already cut their main rates to all-time lows. It’s likely that the BOC, RBA, and RBNZ keep rates at these levels, […]