The outlook for EUR/USD has improved after a more upbeat week for the currency that pointed to further modest near-term gains. Shortly after some desperately poor GDP data for the first quarter of this year due to the coronavirus pandemic, and the likelihood that the second quarter will be even worse, the European Central Bank again indicated that it is prepared to do almost anything to ameliorate the economic impact of Covid-19.

That should help offset continued bickering and a notable lack of action by Eurozone governments. The Eurogroup of national finance ministers holds yet another video conference this week, and was urged once more by the ECB to help out, but seems unlikely to do so. Still, expectations are so low that another failure to agree is unlikely to send the Euro lower after its advance this past week. 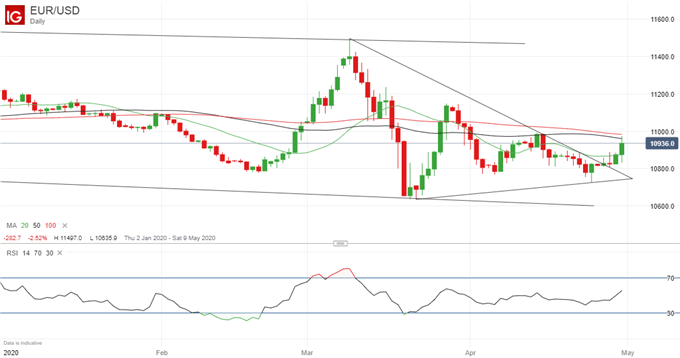 Another potential pitfall is an expected ruling by Germany’s Constitutional Court on the central bank’s asset-purchase program. Traders need to watch out for that ruling but if the past is anything to go by the court will decline to interfere.

Week ahead: PMIs and retail sales

On the data front, none of the expected Eurozone releases will likely rock the boat. The purchasing managers’ indexes for the region’s manufacturing and services sectors are final figures for April so unlikely to have an impact. That leaves just retail sales numbers for March, before the worst of the lockdowns that have hit economic activity so hard.

As for the US side of the EUR/USD equation, attention will be on Friday’s non-farm payrolls data, forecast to be down by some 20 million. However, as we know already that more than 30 million Americans have sought unemployment benefits since March 21, the number has probably lost its ability to shock.

Feel free to contact me via the comments section below