The S&P 500 index climbed to 3,184 on Tuesday morning, approaching a key resistance level which it failed to break above in early June. Investors are cheering a big rally in China and Hong Kong, and US-listed China technology firms. Alibaba (+7.33%) and Baidu (+7.81%) outperformed. Tesla’s whopping 13.48% gain led the Nasdaq Composite to hits an all-time high of 10,433.

Investors are also shrugging off the virus situation as the Covid-19 case growth rate in the Sun Belt states – Florida, Arizona and Texas – fell below its seven-day average.

The next big thing is the Q2 US earning season, in which market participants are expecting an ugly picture. During the second quarter, analysts have lowered earnings estimates for S&P 500 companies. On a per share basis, the bottom-up estimated earnings for the second quarter decreased by 37%(chart below), according to Factset. The forward 12-month P/E ratio for the S&P 500 is 21.8 – higher than the 5-year average of 16.9 and 10-year average of 15.2.

That said, the price of US equities seems to have diverged further from economic fundamentals, rendering them vulnerable to a pullback should earnings deliver a big miss. However, Corporate America tends to set relatively conservative earnings guidance, such that the estimates could be beat more easily. Fasten your seat belt, as nearly 70% of the S&P 500 components will deliver their results by the end of July. 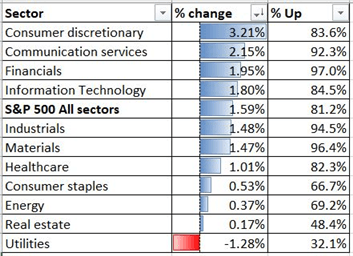 The index is re-challenging a resistance zone at 3,180 – 3,200, which it failed to break in early June and has subsequently entered into consolidation. The index is riding an uptrend which is highlighted by the ascending channel below. Overall momentum remains bullish in the near term. A firm break above 3,200 will likely open room for more upside towards 3,360 – the 200% Fibonacci extension.

Technically, the Nikkei 225 index is consolidating at around 22,000 – 22,700 for three weeks (chart below), lacking catalysts to break the rectangular box in either direction. The overall trend remains bullish however, as the 50-day Simple Moving Average (SMA) has crossed above the 100-day SMA, forming a ‘golden cross’ on the daily chart. Will Nikkei follow Wall Street and Greater China markets higher? The next few days will probably give us the answer.

Hong Kong’s Hang Seng Index stock market benchmark has firmly broken an ‘Ascending Triangle’ and soared to a three-month high at 26,339 yesterday. Futures markets are pointing to a positive start today, with sentiment boosted by a strong US trading session last night. Financials and real estate were among the best-performing sectors on Monday.

Mainland China stocks are gaining momentum, and the FTSE China A50 index soared to a 12-year high with surging trading volume. The state-owned media is cheerleading a bull market, which is perceived to help cushion an economic slowdown and revitalize consumer spending.

Technically, the Hang Seng Index is riding a bull trend with immediate resistance level found at 27,250 – the 76.4% Fibonacci retracement level.

Intel’s (INTC) continued failure to promptly address the company’s lack of innovation is increasing the probability that its talented competitors will fill that power vacuum. This process is The Chippening, and it is chipping away […]