Gold’s bull market is being driven by currency considerations right now, and the recent bounce in the U.S. dollar accounts for gold’s latest pullback. Here we’ll discuss the factors behind the dollar’s recent strength and gold’s decline. I’ll also make the case that while the “correction” for gold was needed, the metal will eventually resume its climb as prevailing political and fundamental factors favor continued dollar weakness ahead.

In my previous gold commentary, I argued that currency weakness, not fear, was the primary impetus behind gold’s rising trend since March. My reason for stating this was simple: investors are clearly becoming more risk tolerant, as evidenced by the continued climb of equity prices. At the same time, other traditional areas of safety (such as utility stocks) are stuck in neutral while U.S. Treasuries (another traditional safe haven) have lately experienced a sharp price decline. The combined evidence suggests a lack of panic-level fear among participants, which was prevalent earlier this year.

Indeed, ever since stock prices bottomed out in March, fear has been gradually on the wane as investors have sought out high-flying tech leaders to take advantage of the liquidity-driven stock market recovery. At the same time, however, defensive-oriented gold and silver prices have risen in seeming contradiction to the “risk-on” attitude reflected in rising equity prices. It’s not often that both stocks and precious metals rally in unison. What, then, accounts for this conflicting message?

The apparent conflict is easily reconciled by taking into account the persistent weakness of the U.S. dollar index (DXY) ever since the March stock market low. For while risk assets have put on a strong showing since then, the dollar has trended lower for most of the last five months. So, with gold prices being inversely correlated to the dollar, it’s easy to see why investors were drawn simultaneously to the allure of risk (stocks) as well as to the inflation protection of gold.

In the last two weeks, however, the dollar index has been trying to establish a bottom. As shown in the above graph, DXY has failed to make a lower low on a weekly basis for the first time since June and is very close to breaking out above its key 15-day moving average (which I regard as the dominant immediate-term trend line). Based on the rules of my trading method, a decisive two-day higher close above the 15-day MA would serve as a technical confirmation of a short-term trend reversal for the dollar (which in turn would likely result in some additional downside pressure for gold).

I also noted in my previous commentary that the gold futures price had stretched too far above its widely-watched 50-day moving average and was therefore vulnerable to either a “pause that refreshes” or a corrective pullback. I opined that the next gold correction likely wouldn’t be a deep one, and I still think that gold will remain above its 50-day MA during the reset now underway. However, if I’m wrong and gold declines more than anticipated by falling decisively below the 50-day line, then it will be time to retrench and pull in the horns on the metal’s intermediate-term (3-6 month) outlook. 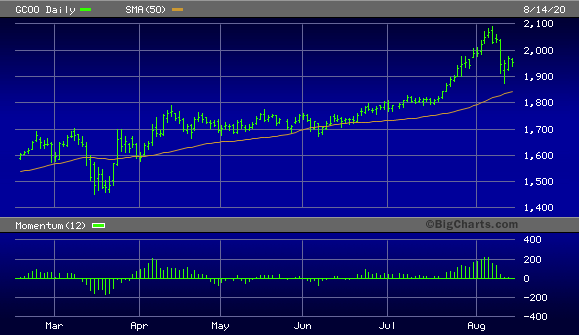 But a steep decline in the gold price would be surprising, especially given the dynamics surrounding the global economy. It’s easy to see the reason for gold’s latest pullback and the dollar’s latest bounce, as there has been some encouraging news surrounding both the U.S. and the global economy lately. On the domestic front, U.S. retail sales rose to a record level in July, confounding economists’ expectations and putting sales back to where it was before the pandemic. Keep in mind that the dollar is to a large extent a reflection of the economy’s strength, so the recent spate of good news has been encouraging for currency traders – in turn serving to discourage additional safe-haven gold demand.

On the international front, manufacturing in the euro zone showed improvement last month for the first time since early 2019. In particular, German manufacturers witnessed expansion for the first time in almost two years, while production activity in France also increased, according to Reuters.

The net result of this global economic improvement is a temporary reduction in gold demand as the U.S. dollar shows signs of strengthening in the very short term. However, as various countries (including most recently Australia) and some U.S. states (such as California) continue to enforce lockdowns in response to COVID, manufacturing will continue to face headwinds going forward.

Concerning Australia’s recent lockdown, ABC news reports, “Australian manufacturing jobs were down 6.7 per cent over the last five years” even before the recent shutdown. With many of Australia’s industries being forcibly closed, the nation’s Prime Minister, Scott Morrison, announced “disaster payments” in the amount of $1,500 as a means of helping distressed citizens cope with the economic effects of the lockdowns. This doesn’t inspire confidence for that nation’s manufacturing outlook.

Australia is just one of many nations currently experiencing pandemic-related manufacturing strictures; indeed, economic shutdowns are a global phenomenon. At the same time, governments and central banks around the world continue to churn out the liquidity to keep those economies from collapsing. This political reaction to the pandemic provides the classic ingredients for inflation, i.e. too much money chasing a reduced amount of goods and services. And since gold tends to perform well during inflation, this dynamic bodes extremely well for a continuation of the precious metal’s long-term bull market.

Turning our attention to the precious metals mining stocks, my favorite indicator for confirming the near-term path of least resistance of the miners is shown below. It’s the four-week rate of change (momentum) of the new highs and lows for the 50 most actively traded North American gold stocks. As you can see, this indicator is currently in decline, which reflects the recent weakness in the leading mining stocks. 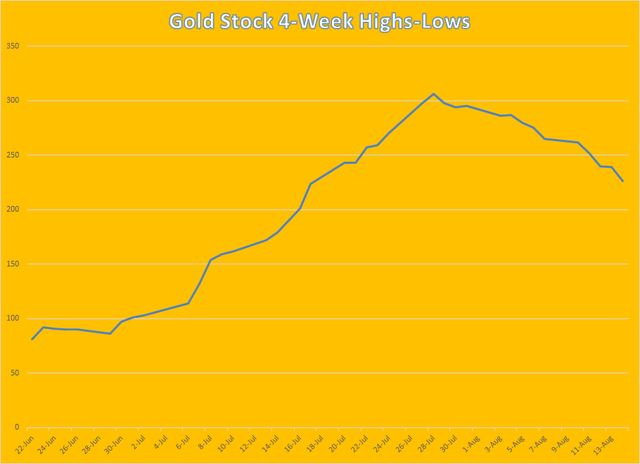 It’s worth mentioning that some of the leading mining stocks anticipated the latest gold price correction, which isn’t at all surprising given that the miners tend to lead the physical metal. It also stands to reason that the miners should ideally be the first to exit the current correction phase ahead of bullion, which is why I recommend that we keep a close eye on these stocks.

Once the four-week new highs-lows indicator bottoms out and reverses its decline, however, we should have another good entry signal for purchasing oversold mining shares. This will especially hold true if the PHLX Gold/Silver Index (XAU) manages to remain above its 50-day moving average during its current pullback. For now, though, investors should hold off on initiating new long positions in the actively traded mining stocks until the XAU confirms a bottom by closing two days higher above its 15-day moving average, shown below. 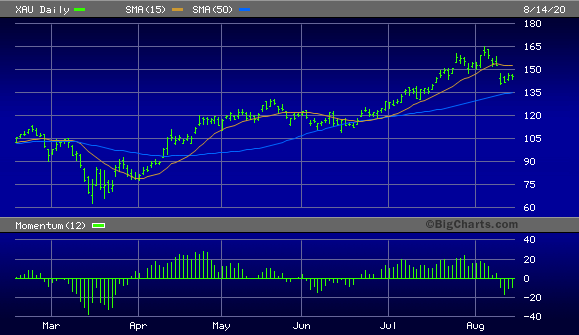 In closing, gold and the gold mining stocks are facing selling pressure right now due mainly to the recent improvement in U.S. economic headlines and subsequent dollar strength. Eventually, however, the increasing number of pandemic-related economic restrictions – both here and around the world – will result in a weaker dollar as central bank stimulus continues, while goods and services production decreases. This is the classic recipe for inflation, which typically boosts gold prices. Accordingly, a bullish longer-term stance toward the yellow metal is still justified in my opinion.

© Reuters. Beijing International Automotive Exhibition BEIJING (Reuters) – Nissan (OTC:) Motor’s chief executive (T:) said on Saturday he planned to launch a slew of new vehicles in the growing Chinese market over the next […]