Election seasons in the USA tend to bring lots of bluster, nationalism and grand, actionable plans, with many of those aimed at trade. However, this election season also happens to include a viral pandemic that unfortunately originated in China, thus creating an election season on steroids!

In this article, I would like to look at possible beneficiaries of the trade war.

Both US presidential candidates, Joe Biden and Donald Trump, have made China and a revitalized manufacturing sector in the USA vital themes as America and China are locked in a major feud. Both sides may attempt to play this off as a trade policy dispute, but in reality, this is the result of China’s meteoric rise as a global economic superpower, and the United States is getting nervous, seeking to re-secure its place at the top.

Both parties have reason to go way over the top during this election, as public perception of China has deteriorated amazingly rapidly since 2017, when the trade war unofficially began. 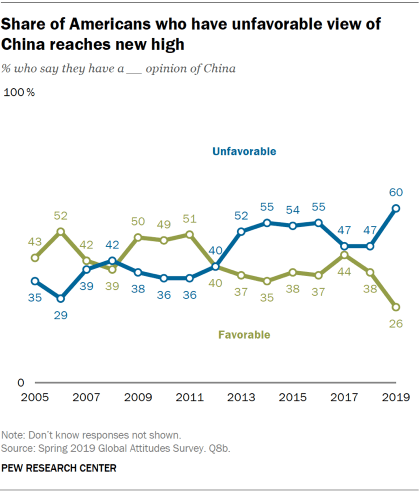 This does not look to be a situation that is either easily won or lost, and will be even harder to repair as both countries and their respective populace now view the other with mistrust and as direct competitors.

Europe, meanwhile, has stayed largely silent during the spat other than token statements that echo the US’s concerns. However, the Europeans have yet to take any formal measures to enforce or punish China for what it sees as abuses.

China can very much not afford to have an open trade war on two fronts with by far the two largest trading blocks on the planet and who, combined, count for over 30% of its worldwide trade.

This creates a massive opportunity for the European Union to “make a deal China can’t refuse.” Europe is truly holding all the cards here against China, as the EU has, like the USA, a massive trade deficit with China. China needs to assure that they have access to the European market, which provides them a pressure release valve of sorts from the assault currently underway by the USA. 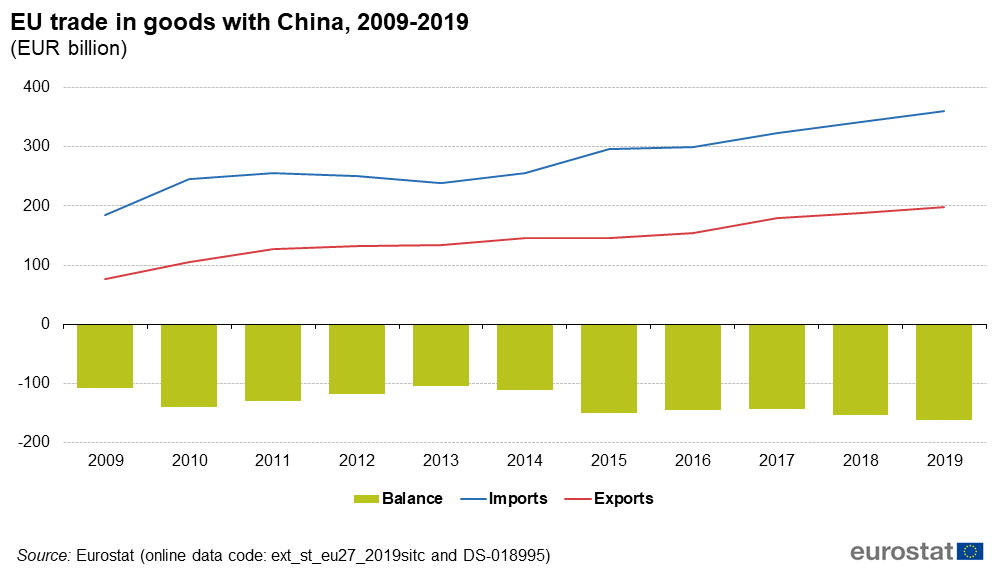 Europe has roughly a $180 billion euro deficit with China currently, thus giving them plenty of ammunition to use in order to pressure for increased access to this rapidly growing market. Thus far, leading members of the EU have been extremely hesitant to blow up this relationship with China and its vast, so far mostly untapped potential.

Below is a graph of the main products traded between the two countries, as well as a graph showing the EU companies with greatest exposure in China. 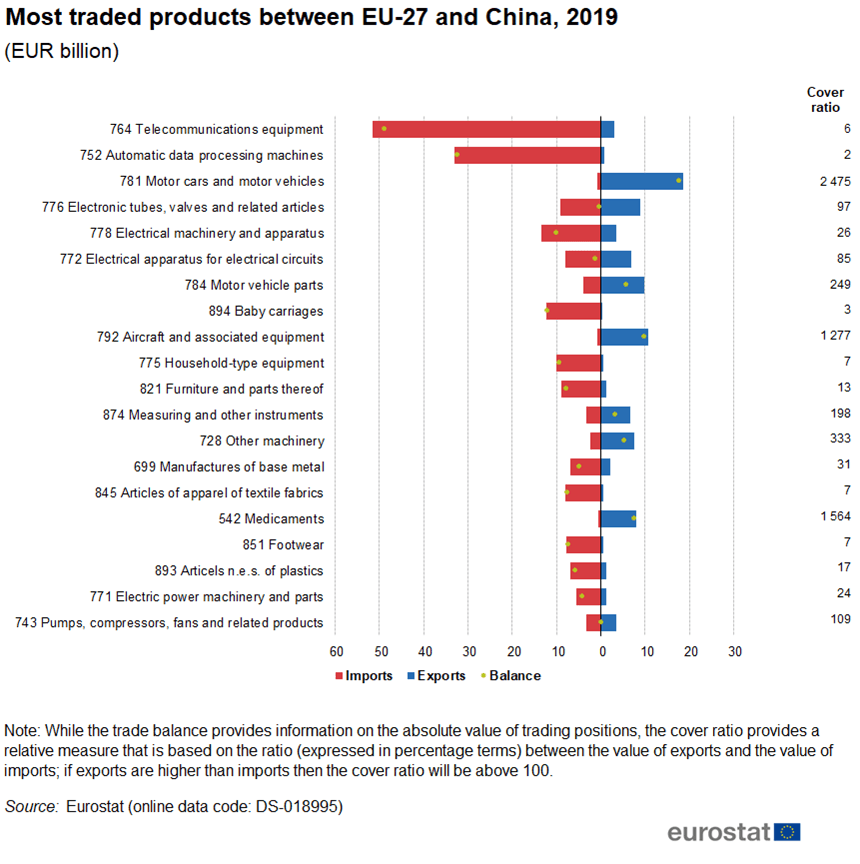 Where I see opportunity in these numbers is in the Medicament, Aircraft, Luxury Goods & Machinery sectors, as these are areas of historic strength of European conglomerates and areas of historic weakness of Chinese companies. You can add vehicle manufacturing in this as well. However, I view China’s growing vehicle sector as an area of focus for domestic production and personal pride, so I have excluded it from my consideration.

Below, I will make my case for a few European companies in these sectors and a wild card from Switzerland that should benefit in any trade scenario.

Unilever is my number one EU pick for Chinese expansion and consumer staples in general and has been for a while. It has a large footprint in China, and its products are top-notch. The company seems primed to be a major beneficiary of the growing middle class and has recently reinvigorated the regional product teams to innovate and tailor products to specific markets, indicating a greater adaptability to local markets and local tastes.

Unilever is trading at a reasonable valuation with a forward P/E ratio of 19, right at its historical average. It also posts a safe and secure 3% dividend to enjoy. The company has been reinvigorated by the shocking 3G attempted takeover a few years back and looks to be both healthy and innovative again. If we see a flight to European products from the trade war fallout, keep UL on your buy list if you do not own it already.

I have been long Unilever for many years and recently added to my position.

Admittedly, this is a bit of a gamble with the world still gripped in the midst of the coronavirus pandemic and the friction with the United States focused on subsidies for this company. However, the shares have been beaten senseless since March, and a long-term view should be taken with this pick.

China has long wanted to domestically build its own jet passenger aircraft. However, this process is a very long, very expensive and very intensive undertaking. 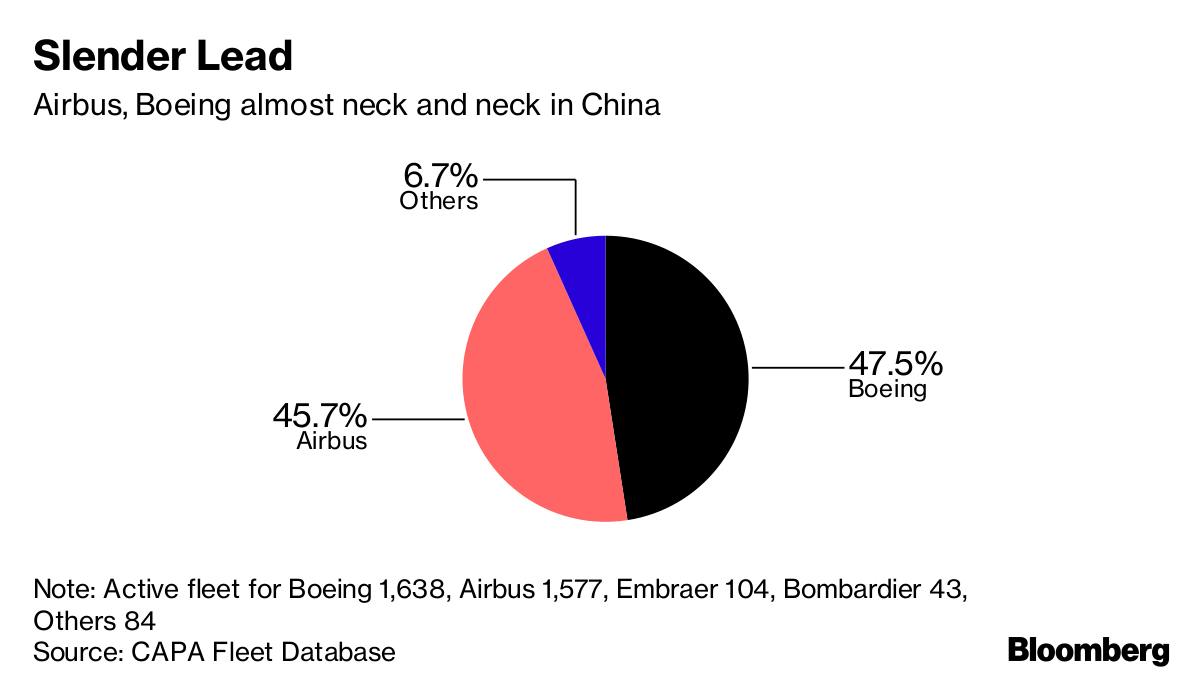 Ostensibly, there are but two passenger aircraft manufacturers operating in China currently, Boeing (BA) and Airbus. Boeing is obviously going to be a first-line casualty in any further escalation of the trade war. When air travel resumes to normal volumes and orders are placed, it seems to me there is but one choice here, and Airbus should reap the rewards of the EU’s neutrality.

I am currently long Boeing on a $160 basis with time to wait for an eventual recovery, but view Airbus as a solid long-term pick here, though risky for obvious reasons.

Luxury goods have been, and will continue to be, on fire in China for a few reasons, among them being the seemingly unstoppable rise of the middle and upper classes in the country. China also has a very strong sense of class and status, with European luxury goods already being the go-to “hey, I’m rich” symbols of success, which will only crystallize and expand if Europe takes a neutral stance in the trade war.

Louis Vuitton is not priced cheaply, but honestly, it never has been in the decade I have been watching the company. The forward P/E ratio stands at an eye-watering 33. However, this is likely skewed by the pandemic we are all facing, and I expect the “normal year” P/E to settle in the 20 range in 2022 and beyond per historical standards.

I am going to watch this company closely and potentially open a position on weakness.

This is my second favorite EU company to capitalize on the trade war, as Siemens produces energy infrastructure, generators, control systems, advanced motors, inverters, sensors and software that is essential to a developing industrialized economy.

The products Siemens produces are not ones that can easily be copied or replaced, and with American companies unlikely to be welcomed in the country for some time, the timing seems right for a large push into the country.

The company also is located in Germany, which is a leading – and some would say controlling – member of the EU. A large deal with the company serves not only as a way to purchase much-needed and high-quality products, but also as a political message of support to the EU’s most powerful member state.

Siemens, in addition to being a key link in any trade message or negotiations to the bloc, also happens to be undervalued, trading at a below-market 16 forward P/E ratio. Shares have languished for many years and have bounced in essentially a range of $45-70 for a decade as Siemens looked to reinvent itself into more of a software and high-value product company.

While long-time shareholders likely are not pleased with their investment to date, this may be a good time for new money to take advantage of this decade of reinvention. The company also pays a well-covered 3.1% dividend, and while having a large amount of debt, it is not at a level that is overly concerning.

I am looking to add Siemens to my portfolio on weakness in the coming months.

ABB has been on my radar for years, as the markets the company operates in are ripe for growth. It operates in the industrial automation, electrification and sensing market, which in any scenario seems to be the riding the wave of the future. I made the unfortunate mistake of selling out of this company at a small profit and shifting into 3M (MMM) during the height of the pandemic, and while I am profitable on the trade, I do regret it as a long-term investment and will be moving back into ABB.

This company should be unaffected by any scenario in the trade dispute, as Switzerland is not part of the EU and is long known for neutrality, sometimes to a fault. If Europe decides to join its American allies in the trade war, in effect closing the pressure release valve, look for ABB to reap the benefits in a large way. 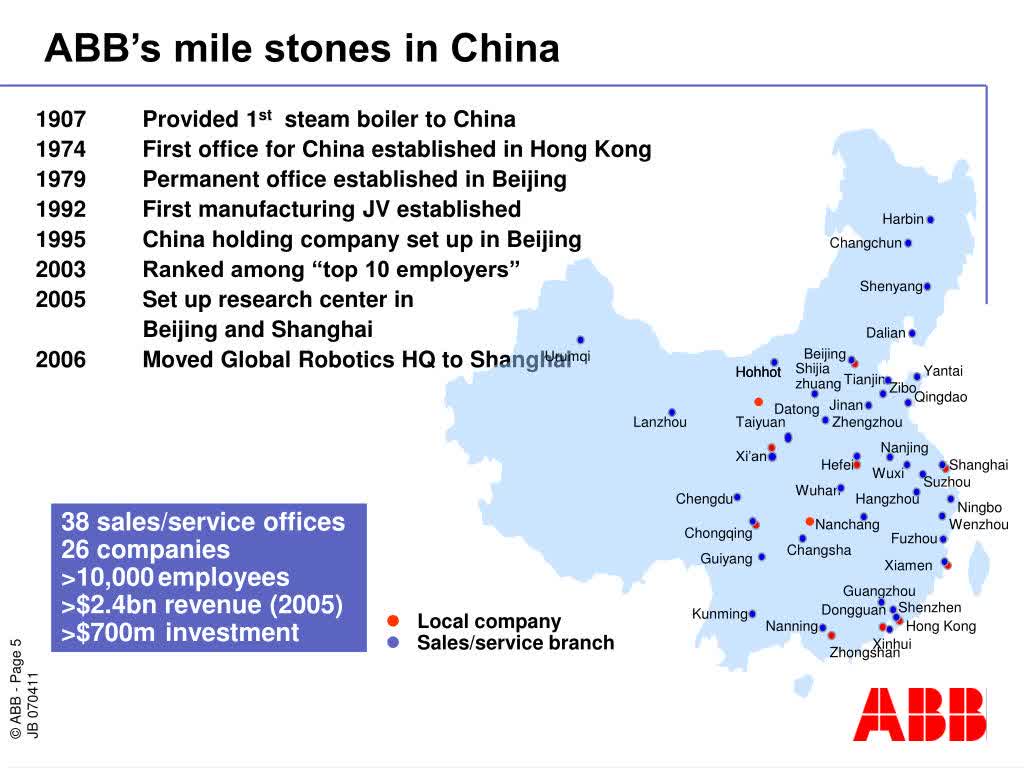 ABB has a very long history in China and has solidified itself as a trusted provider in the country. Its main competition is from European, Japanese, Korean and American companies. Potentially all of its competitors could be drawn into any long trade dispute with the USA, as all of the above countries are historic allies of America, and both Japan and Korea need the USA to check China’s growing military power.

ABB is also not expensive at a forward P/E estimate of 22. The company seems to be getting its groove back and refocusing on its core Robotics, EV and automation segments by divesting its power grid business to Hitachi in July of this year. ABB is set up to thrive in any trade war outcome.

I plan to rectify my mistake of selling this company in the near future.

European companies could be key beneficiaries of the trade war between China and the USA. European companies have had a rough decade, but this may soon change, as the stage is set up well for them to capitalize on the friction between the two single-largest economies in the world and grab a lion’s share of the world’s largest and fastest-growing market.

If you have no European conglomerate exposure, I would suggest further research and perhaps considering a place in your portfolio for a few of these established, fairly valued companies.

These are not investment recommendations and should not be taken as such. Please do your own research and contact your financial advisor for proper guidance.

Disclosure: I am/we are long BA, UL, MMM. I wrote this article myself, and it expresses my own opinions. I am not receiving compensation for it (other than from Seeking Alpha). I have no business relationship with any company whose stock is mentioned in this article.

Additional disclosure: I may initiate long positions in SIEGY & ABB in the next 30 days.