The price of copper surged to a fresh 2 year high during Asia-Pacific trade, on the back of US Dollar weakness and supply concerns after major producer Rio Tinto cut its outlook for the remainder of 2020.

The trade-sensitive Australian Dollar crept higher alongside the Euro, whilst the haven-associated Japanese Yen slid against its major counterparts.

Gold dipped as much as 0.8% while yields on the US 10-year Treasury Note nudging slightly higher.

Looking ahead, Euro-area and Canadian inflation data headline the economic docket ahead of the weekly EIA crude oil inventory report for the week ending August 14.

Germany’s willingness to keep its foot on the fiscal stimulus throttle could underpin regional risk assets in the coming months and possibly intensify capital flows into European equity markets, as Finance Minister Olaf Scholz proposes an extension of current unemployment benefits from 12 to 24 months.

Scholz’s intentions to nurture the economy through the ongoing coronavirus pandemic is in stark contrast to what appears to be taking place in the United States. Possibly resulting in the German DAX 30 index outperforming its US counterparts in the near-term.

Republicans and Democrats remain “trillions of dollars apart” in stimulus negotiations, according to White House Chief of Staff Mark Meadows, despite high-frequency data pointing to a labor force in dire need of additional fiscal support.

Job postings in the United States decreased by 36.4% in the week ending August 14, dropping to the lowest levels since early-May, when the unemployment rate was 13.3%.

This may be indicative of a rising level of joblessness in the month of August and could spell trouble for the US economy given enhanced $600 weekly unemployment payments expired at the end of July, and Congress is on summer hiatus until early September.

To contrast, the German unemployment rate remains in single digits at 4.2% – as of June – and recent economic data suggests that Europe’s largest economy has endured the Great Lockdown relatively well, as manufacturing PMI expanded for the first time since December 2018 in July.

Europe’s ‘safe haven’ asset, German 10-year Bunds, are at risk of reversing lower after rebounding from support at the July low to breach resistance at the 38.2% Fibonacci (104.61).

Further declines appear in the offing if price fails to close above downtrend resistance and the psychologically pivotal 105 level as the RSI struggles to climb over its neutral midpoint,

An extension to the downside more than likely coinciding with the German DAX 30 index climbing back above the 2020 open and erasing its yearly losses. 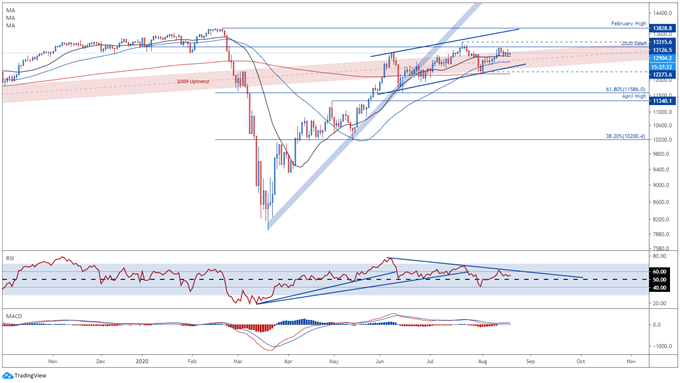 Although prices have stagnated over the last 5 days the RSI and MACD indicators have continued to track in positive territory, hinting that the path of least resistance may be to the upside.

To that end, a daily close above the monthly high (13102.6) could signal a resumption of the uptrend extending from the yearly low (7957.6) and possibly lead price towards the convergence of Ascending Channel resistance and the February high (13828.8).

Dow, Nasdaq, USD Talking Points Stocks put in a strong gap-higher to start this week’s trade, further recovering a portion of the September sell-off. At this point, both the Dow and Nasdaq have retraced approximately […]