The haven-associated US Dollar and Japanese Yen rebounded late in Asia-Pacific trade whilst the trade-sensitive Australian Dollar fell 0.3%.

Month-end flows may be behind the rebound seen in the Greenback given Asian equity markets broadly gained, with Japan’s Nikkei 225 index surging 1.22% and Australia’s ASX 200 index climbing 0.3%.

The under-fire US Dollar may continue to lose ground against the Euro after Federal Reserve Chairman Jerome Powell announced the central bank’s adoption of average inflation targeting (AIT).

To contrast, the European Central Bank’s (ECB) has a more modest goal of an inflation rate “below, but close to, 2%”, which in turn limits the ability of President Christine Lagarde and her fellow council members to keep monetary policy conditions as loose as their US counterparts.

Having said that, both central banks remain committed to deploy further stimulus measures if needed, with Chief Economist Philip Lane reiterating that “the ECB Governing Council stands ready to adjust all of its instruments, as appropriate” at the Fed’s annual Jackson Hole symposium.

Nevertheless, the enhanced ability of US policymakers could serve to underpin EUR/USD rates ahead of the ECB interest rate decision on September 10, with the Governing Council expected to “be in a better position to reassess the monetary policy stance and its policy tools”.

However, the rising number of Covid-19 cases in several European nations could drag on the Euro in the near term, as a ‘second wave’ of infections force local governments to reimpose economically devastating restrictions.

The University of Oxford’s Government Response Stringency Index reflects the tightening of restrictions in Germany, Italy and Spain since the end of July, with France the only country not to reimpose measures despite a substantial increase in infections. France reported 7,379 new cases on Friday, the biggest one day increase since the 31st of March.

Although French President Emmanuel Macron believes his country can suppress the virus without having to resort to the lockdown measures imposed in March-April, he conceded that a nation-wide lockdown may be necessary “if the virus continues to surprise us”.

With that in mind, upcoming economic data may take a backseat to ongoing health developments, with the forced imposition of further restrictions probably hampering the performance of the Euro against the haven-associated US Dollar and Swiss Franc. 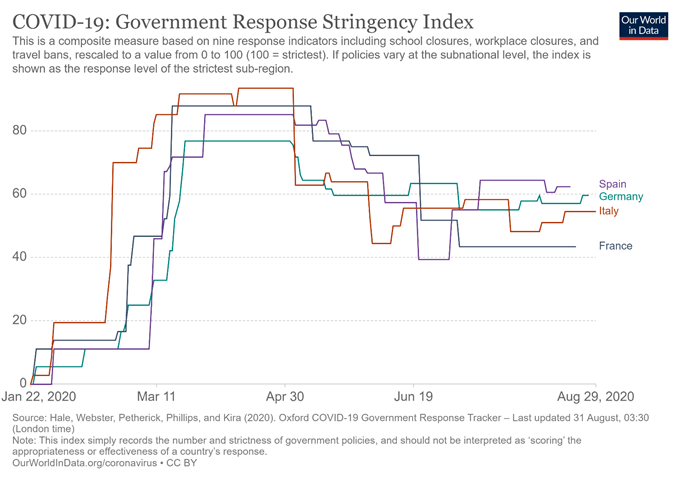 From a technical perspective, EUR/USD rates continue to consolidate in a Bull Flag continuation pattern just shy of psychological resistance at the 1.19 level and could drift lower in the coming days, as price fails to climb above the midpoint of the 2008 downtrend.

Although the RSI remains constructively positioned above 60, and the MACD eyes a bullish cross above the signal line, a pullback to the 21-day moving average (1.1830) and psychologically pivotal 1.18 level appears on the cards.

This potential pullback could precede EUR/USD’s push to fresh yearly highs, with a daily close above the August high (1.1966) needed to validate a break of the bullish continuation pattern and open a path to test the upper bounds of the 2008 downtrend.

The implied measured move suggesting price could climb to test the 1.22 level.

On the other hand, a break below the 1.18 mark could ignite a more sustained decline back to flag support at the August low (1.1696). 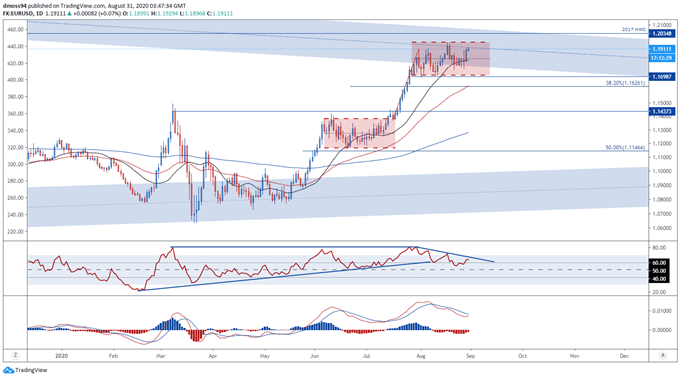 The EUR/CHF exchange rate seems to be running out of steam after pushing back above the sentiment-defining 200-day moving average (1.0731) at the tail-end of July, as price fails to break above the 21-DMA (1.0763) and the RSI drifts back below 50.

A correction towards confluent support at the March high (1.0710) and 12-week uptrend could eventuate if price hurdles support at the 200-DMA (1.0731), with a break below the 100-DMA (1.0730) probably coinciding with the RSI snapping its yearly uptrend.