Farfetch (FTCH), the e-commerce site dedicated specifically to high-end fashion labels, has surprisingly turned out to be one of the beneficiaries of the coronavirus. The company had struggled to find footing in the markets since its IPO in 2018 at $20 per share. This year, investors thought that the pandemic would sap demand for all retail companies, including Farfetch. Pessimism sank the stock to ~$7/share in March, but Farfetch’s strong performance since has the stock more than ~4x up from its lows and up about ~160% for the year.

Yet in spite of all this strength, I think Farfetch’s rally is fully supported by the strength of its results and the upward acceleration in its growth trajectory. It’s a good time, in my view, for investors to re-assess the bullish case for this stock:

Investors would be wise to continue riding Farfetch’s momentum upward.

Let’s now go through some of the key highlights emerging out of Farfetch’s second-quarter results. The earnings summary is shown below: 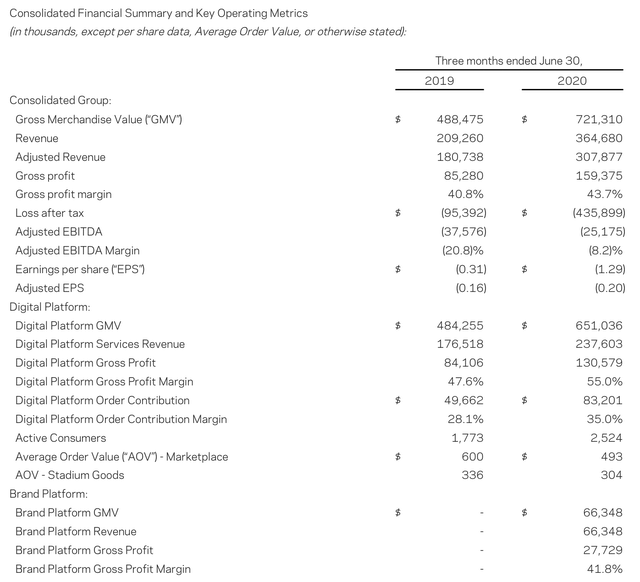 Farfetch grew revenues at a stunning 74% y/y to $364.7 million, absolutely decimating Wall Street’s expectations of $326.9 million (+56% y/y) by nearly a twenty-point margin. Recall that a portion of this growth, however, is inflated by the acquisition of the New Guards Group, which won’t be fully comped in Farfetch’s results until Q4.

Underpinning the strength in this quarter was an acceleration in GMV (or gross merchandise value, which represents the sum of all the direct and third-party revenue transacted on Farfetch’s platform). GMV rose 48% y/y in the quarter, accelerating two points versus 46% y/y growth in Q1. This acceleration helps to validate the thesis that Farfetch, at the perfect intersection of e-commerce and luxury fashion, is not only undamaged but also slightly boosted by the pandemic. The company called out specific “outsized performance” in Western Europe, the Middle East, and China as driving the outperformance in the quarter.

Farfetch also noted that it added 500k net-new customers in the quarter, a record for the company. It also reported web traffic up 60% y/y, and a year-over-year doubling in the number of new app installs. The latter metric is important as Farfetch has noted shoppers with the Farfetch app tend to be stickier and higher lifetime-value customers.

The company has also proven the value of its New Guards Group acquisition. Farfetch’s internally owned brands generated $66.3 million in revenue in the second quarter (the acquisition happened in the third quarter of 2019, so there is no prior-year compare), and these brands were also the highest-grossing GMV out of any brand on the Farfetch platform.

Equally as important is the fact that Farfetch has boosted its gross margin profile, up 290bps y/y on a total basis to 43.7%, and up 740bps y/y for the digital platform only (that is, excluding brand and in-store revenue). The most important highlight here is that Farfetch has reduced its reliance on discounting to drive sales, and full-price items are performing better than in prior years. Elliott Jordan, Farfetch’s CFO, explained the margin gains as follows on the Q2 earnings call.

There were three key drivers of the higher margin. First, the growing mix of higher margin services, in particular the momentum of Farfetch Platform Solution, which comes with a lower cost of revenues and higher order contribution as a result.

Second, reduced funding of customer promotions within our marketplace. Our spend on promotion as a percentage of GMV was back at Q2 2018 levels, reversing the step-up in spending we saw this time last year.

And finally, improving first-party margins at 30% versus some 10% in Q2 2019, as we delivered a better full price mix versus last year, as well as the growth of first party original products, which have higher product margins.”

Overall, Farfetch noted a 1261bps improvement in adjusted EBITDA margins, with gross margin gains additionally accompanied by reductions in general/administrative and technology spend as a percentage of revenues. 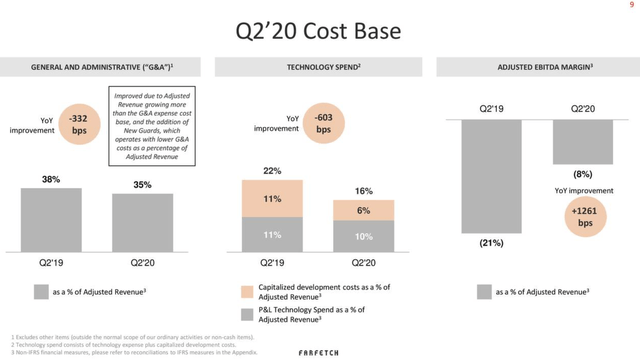 The company’s pro forma EPS of -$0.20 beat Wall Street’s expectations of -$0.24, and Farfetch also still plans to be profitable on an adjusted EBITDA basis for FY21.

Farfetch has turned in remarkable performance this year, showing robust GMV growth and capturing market share within retail despite A) the global pandemic and B) reduced levels of promotional spending. At the same time, Farfetch continues to drive outsized profitability margin gains (on both a gross margin and EBITDA front) and continues to expect positive adjusted EBITDA for next year. In short, there are strong justifications for this year’s rally – stay long here.

Disclosure: I am/we are long FTCH. I wrote this article myself, and it expresses my own opinions. I am not receiving compensation for it (other than from Seeking Alpha). I have no business relationship with any company whose stock is mentioned in this article.