The tech sector has seen an incredible rally since the market bottomed in March. This has led many investors to draw comparisons with the 1999 dotcom bubble. Valuations are certainly frothy, and investors are wary. However, one tech stock stands out in my mind as having both growth potential and a very reasonable valuation; Intel Corporation (INTC).

This company combines the potential growth of the technology sector with the reliability of more traditional income stocks at a very attractive valuation. Intel’s new offerings could potentially set it apart from other chip manufacturers, which could lead to double-digit returns in the next 3-5 years.

Over the last few days, Intel’s stock has plunged by about 20%. This has been attributed in great part to the release of the latest quarterly results, which featured a surprise announcement that Intel’s latest 7mm chips would not get to the market until 2021, a whole 12 months later than was planned. The quarterly results in and of themselves were better than expected: 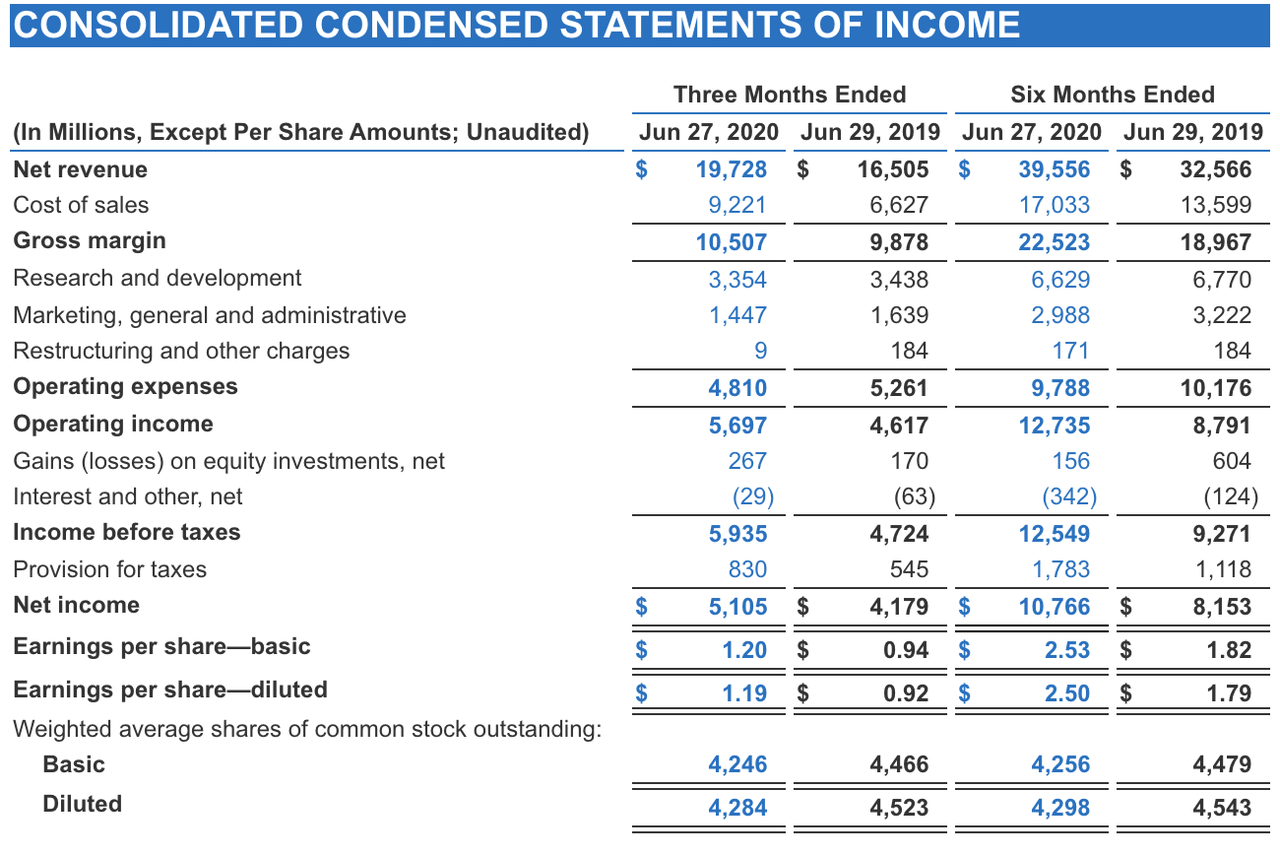 Overall, net revenues have increased by over 20% in the last 6 months. The increase is even bigger as measured by EPS, which has grown by 39%compared to the first two quarters of 2019.

In terms of the balance sheet, the company continues to be as strong as ever. While the company has increased its debt load over the years, the D/E sits at a safe 0.4, and the current ratio is around 2.

Despite the not that minor setback of the 7mm chips, I believe Intel is still in a strong position, and given its valuation, I rate it a very strong buy. Let me elaborate.

What’s next for Intel?

The question we must answer is what’s in store for Intel? Looking at the share price today, Intel looks like it is priced for a worst-case scenario. Despite having achieved near double-digit growth over the last three years, Intel only has a P/E of around 8, making it seem like investors don’t believe the growth can continue.

However, as is evidenced by the latest quarterly data, Intel’s business is still growing, and fast. 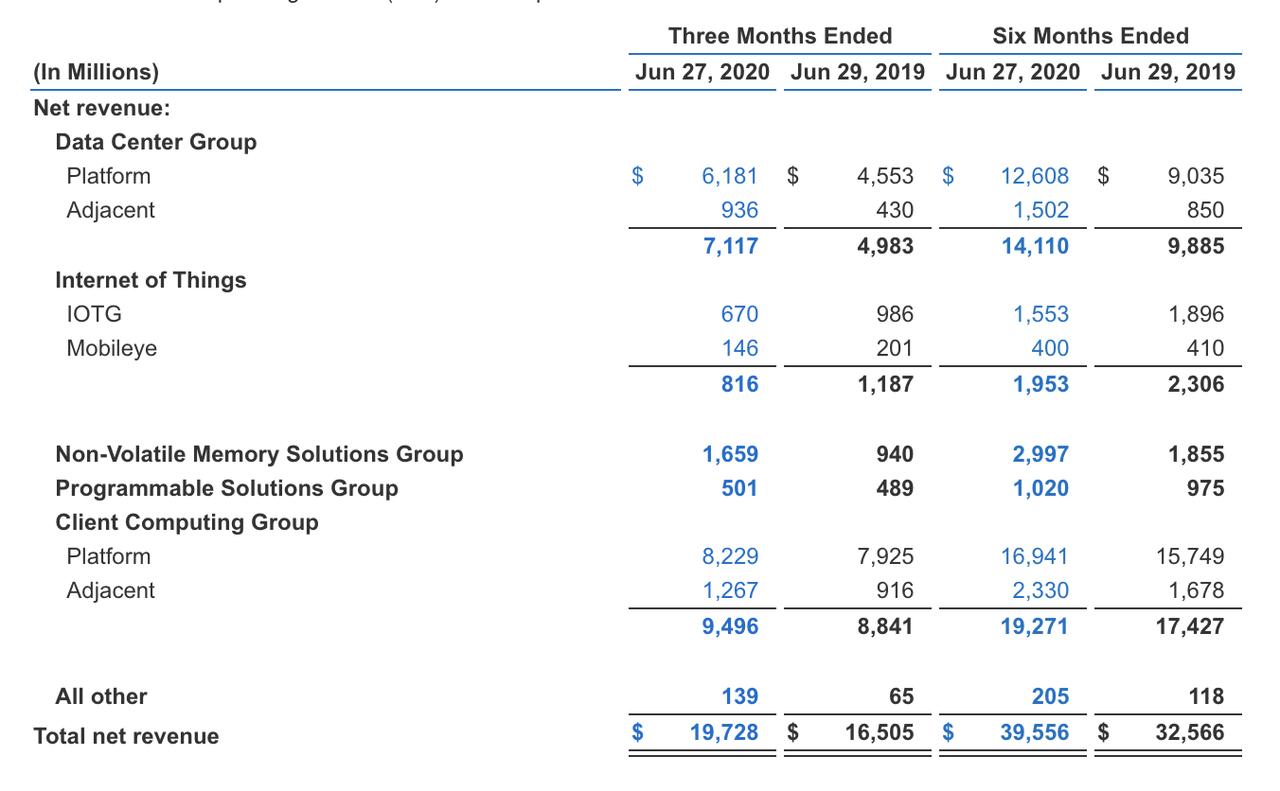 Looking at the segment breakdown, we can see that most of Intel’s revenue comes from its Memory solutions, most specifically the “Platform” sub-segment. There’s no reason to believe that Intel won’t continue to grow in this department. Demand for memory is only going to grow more over time. Intel is a best-in-class provider for business solutions in this department.

The same analysis could be made with its Data segment. Intel has achieved a whopping growth of over 30%. How can Intel manage this? The answer is simple, despite all the buzz around other chipmakers like Advanced Micro Devices (AMD) and NVIDIA Corporation (NVDA), Intel offers the best in terms of value and efficiency when it comes to chips. Intel’s chips are not only cheaper but also more powerful in some cases. In this regard, while investors wait for the 7nm chip release, they can still look forward to the release of Intel’s 11th Gen Tiger Lake chips.

The bottom line is, as I already discussed in my previous article on Intel, that the company has reinvented itself over the last 5 years. This can be seen in their products and the much higher growth rates the company has enjoyed. Intel is positioned to be one of the biggest players in the semiconductor industry. Even if Intel fell behind the competition, the tailwinds from 5G, the Internet of Things, and Artificial Intelligence will ensure that the company continues to enjoy high demand for its products.

Even though Intel has delivered consistently over the last 3 years, the valuation doesn’t reflect it at all. The latest plunge in the stock price represents just an even bigger opportunity to buy a heavily discounted quality company. In the table above, we look at some of the valuation ratios for Intel and its peers:

Above we can see a comparison of Intel to its peers; AMD, NVDA, and Cisco Systems (CSCO). By any valuation measure, Intel is way underpriced compared to its peers. The most staggering to me is the fact that Intel trades at only a 0.34 PEG ratio. Investor Peter Lynch made the point that an aptly valued company should have a PEG of around 1, although today most big tech companies trade far above that. Furthermore, Intel doesn’t only offer a great way to gain exposure to technology, but it also offers a reliable source of income. Much like CSCO, the company pays out a reasonable dividend of around 2.6%, which is more than covered by its operations.

While investors are eagerly cueing up to invest in the FAANG companies, Intel goes unnoticed. The FAANG club is now trading at ludicrous valuations, with P/Es in the 30 range. Despite them being great companies, for the most part, at this point, it simply doesn’t make sense to pour more money into them from a value perspective.

Intel is one of the most undervalued blue chip stocks out there. It has the potential to be so much more, and it has already shown in the last few years that it can deliver. With a P/E of 9, it is the most undervalued stock in the sector. Once investors realize this, we could easily see the multiple expand, and I fully expect the share price could more than double within the next two years. The latest dip just adds to the attractiveness of this investment.

Disclosure: I am/we are long INTC. I wrote this article myself, and it expresses my own opinions. I am not receiving compensation for it (other than from Seeking Alpha). I have no business relationship with any company whose stock is mentioned in this article.

This is a challenging time even for the makers of consumer staples, and Diageo (DEO) is no exception, as consumption has dropped significantly outside the U.S., while the U.S. market has held up better so […]