Global Blood Therapeutics (GBT) has been on my radar since late 2017. My first article primarily detailed some risks involved with the company. Subsequent articles (from January 2018 on) became increasingly optimistic as I realized the potential in its, then, investigational drug, voxelotor. To the chagrin of many doubtful bears, the FDA approved the drug on an accelerated basis. Furthermore, the story continues to get better as the FDA requires only a favorably designed confirmatory study for full approval and their drug is off to a solid start in the market.

While the stock price is on a clear positive trajectory within the time frame, I still have a feeling much upside still remains.

The article below details Oxbryta’s (voxelotor) market performance thus far and looks ahead to key catalysts.

For the second quarter of 2020, Global Blood revealed net revenues for Oxbryta of $31.5M, beating expectations by greater than $10M. The most revealing tidbit the company detailed was the apparent willingness from prescribers to initiate Oxbryta for sickle cell patients without many caveats:

(…) Oxbryta is being prescribed to a broad range of patients irrespective of hemoglobin level, history of vaso-occlusive crisis, and current therapy for sickle cell disease. Almost half of patients started therapy with baseline Hb greater than 8 g/dL, and more than half take Oxbryta in combination with another SCD therapy.

In my experience, hematologists will decide to transfuse blood to chronically anemic sickle cell patients when hemoglobin levels drop below 6.5 or 7 grams per deciliter (g/dL). The fact that Oxbryta is being initiated broadly in patients with baseline hemoglobin levels exceeding 8 g/dL is significant and demonstrates confidence and trust in providers. My discussions with hematologists I work with have echoed the sentiment: prescribers and patients, alike, are welcoming Oxbryta with open arms. And why not? If the FDA/ASH workshop on sickle cell disease revealed anything, it was the unmet need to address hemolytic anemia in sickle cell disease and the sufferers’ desire to swallow a drug that does so.

Trading near $67/share, Global Blood Therapeutics is valued near $4B (market capitalization). Considering cash on hand (>$500M), the company’s enterprise value is near $3.5B. This is appropriate for a typical drug expected to do $1B in peak annual sales. With the way things are going, Oxbryta could very well exceed $1.5B in peak annual sales. Subsequently, it is reasonable to bank on stock of GBT exceeding its latest 52-week high of $87/share. But how can this happen? 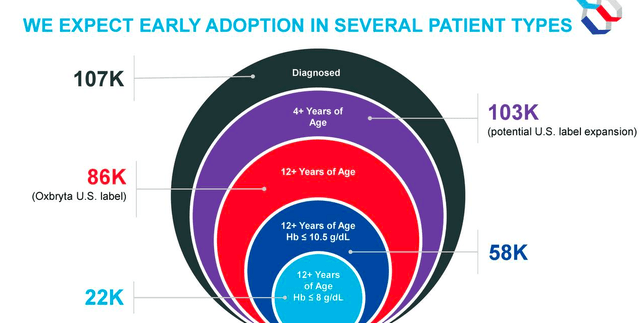 I have previously touched on Oxbryta’s prospects in the confirmatory TCD study. Read more here. The company intends to submit an NDA for full approval by mid-2021. So, confirmatory data can be pegged for 1H of next year.

I believe it is likely stock in Global Blood will trade between $50/share-$80/share in the time being, before a major catalyst drops (e.g. data, full approval). A realization of positive catalysts could see prices exceeding $90/share within one year. This could present new investors with returns exceeding 50%. This is likely to outperform the general biotech market (XBI), which has, in my opinion, outrun itself, on the heels of mere hope, in the midst of a pandemic:

The drug is showing clear signs of outperformance early on in the market. This is predictive of future success. Oxbryta fulfills a major desire of both prescribers and patients for a troubled disease. The last hurdle is a confirmatory trial that was, seemingly, designed for success. With full approval, Oxbryta is likely to garner >$1.5B in peak annual sales, inspiring new 52-week highs in shares of Global Blood. Much of the risk in this story has diminished but reasonable upside still remains within the next year, making it a worthy biotech investment. Global Blood Therapeutics remains a top conviction idea for me as I fully expect the positive share price trajectory to continue for the foreseeable future.

Disclosure: I am/we are long GBT. I wrote this article myself, and it expresses my own opinions. I am not receiving compensation for it (other than from Seeking Alpha). I have no business relationship with any company whose stock is mentioned in this article.

Additional disclosure: The intention of this article is to provide insight, not investment advice. While the information provided in this article is intended to be factual, there is no guarantee and prospect investors are encouraged to do their own fact-checking and research before investing in a company. One must also consider one’s own financial standings, risk tolerance, portfolio diversification, etc. before making a decision to buy shares in a company. Many of my articles detail biotechnology companies with little or no revenue. These stocks are, therefore, speculative and volatile. Even when prospects seem promising, there is no predicting the future. Losses incurred may be significant.