We’re more than two-thirds of the way through the Q2 Earnings Season for the Gold Miners Index (GDX), and Metalla Royalty & Streaming (MTA) is the most recent royalty name to report its results. The company reported its fiscal Q4 and FY2020 results Friday and had a very challenging year with two mines supposed to be contributing to revenue delayed due to COVID-19, and its largest contributor offline in H2 2020 after moving into care & maintenance. The good news is that the weak operating results in FY2020 are likely to be an anomaly as COSE, Joaquin, and Wharf should pick up the slack in FY2021. While this is encouraging, Metalla is no longer cheap at over 100x sales. Therefore, while I think the company has a portfolio of exceptional assets, I would not be chasing the stock above US$9.30.

Metalla Royalty & Streaming released its Q2 results on Friday with annual attributable silver production of 178,600~ ounces, down over 60% from the 491,400 silver produced in FY2019. This was disappointing for investors as the company has been busy beefing up its royalty/stream portfolio with several moves made in the past year. However, while this massive drop in annual output looks terrible from a headline standpoint, it was at no fault of Metalla. This is because two mines which should have contributed to attributable yearly silver production had delayed start-ups due to COVID-19. At the same time, the top contributor to Metalla’s output, Endeavor, moved into care & maintenance in fiscal H2 2020. Given these two headwinds, there was no hope in Metalla besting its FY2019 results, so the annual attributable production and revenue look much worse than they should have this year.

As we can see in the table above, while Shanta’s (OTC:SAAGF) New Luika Gold Mine contributed a similar amount of silver ounces year-over-year, the Endeavor Mine Silver Stream took a massive bite out of Metalla’s total attributable silver ounces produced. During FY2020, attributable production from the Endeavor Silver Stream fell by over 70% to 98,000~ ounces, down from 383,300~ ounces in the prior year. As noted earlier, this was due to CBH Resources’ decision to move the mine into care & maintenance in December while it assesses potential future production from the Deep Zinc Lode at depth. This much lower silver production led to FY2020 revenue plunging by 54% year-over-year to C$3.6 million.

Based on the significantly lower revenue, it’s no surprise that we saw wider net losses in FY2020, with Metalla’s net loss coming in at C$5.8 million, up from C$2.4 million in FY2019. The weaker revenues also had a negative effect on adjusted EBITDA, which slipped from C$2.1 million in FY2019 to negative C$1.9 million in FY2020. The culprit for the wider net loss was higher general & administrative expenses [G&A] due to higher transaction activity in the period combined with a material decrease in revenues. While it’s easy to look at this quarter and write off the company from one’s watch-list, there were several bright spots that are worth mentioning.

(Source: Author’s Chart)The first silver lining worth mentioning is that operating margins per attributable ounce increased substantially in FY2020, up from $9.06/oz to $10.66/oz. This significant increase was due to the much higher average realized silver price in the period, which jumped from $15.33/oz to $17.24/oz. Clearly, these margins have significant upside at an ultra-conservative silver price of $21.00/oz. Using a $21.00/oz silver price, and my estimates for similar operating costs per ounce, we could see margins improve to $14.00/oz in FY2021 based on this very conservative estimate. Assuming Metalla meets these estimates, we should see a more than 30% increase in operating cash margins year-over-year at a bare minimum ($10.66/oz to $14.00~/oz).

The other piece of good news is that the company has been busy adding assets at break-neck speed in the past year. As the above charts show, Metalla has been the busiest royalty/streaming name in FY2020, and also since its inception. The company benefits from being able to pick up smaller deals that wouldn’t really move the needle for the largest royalty names like Royal Gold (RGLD) and Franco Nevada (FNV), and we’ve seen Metalla’s portfolio grow to 50 assets as of August. Therefore, while the loss of attributable production from CBH Resources’ Endeavor Mine is quite disappointing, several assets in this portfolio will have no problem picking up the slack and more.

Finally, as noted earlier, while the Endeavor Mine’s contributions won’t be any help to Metalla in FY2021, the recently acquired 1% NSR on Couer Mining’s Wharf Mine should help out considerably. During Q2, the mine performed well for Couer, producing nearly 25,000 ounces of gold. The bonus to Wharf is that it shouldn’t get hit by any COVID-19 related shutdowns as the US mines have been mostly unaffected, as they were declared essential. Therefore, I like this move by the company as it’s an immediate revenue generator in a jurisdiction that isn’t tied to COVID-19 risk.

Meanwhile, the two assets that were supposed to bolster revenue in FY2020 should finally move online by September, with COSE (1.5% NSR) and Joaquin (2.0% NSR) delayed due to mandatory shutdowns by the Argentinian government related to COVID-19. While COSE has been running at reduced operations since moving back online, we have seen high-grade ore stockpiled since May. Therefore, we should see a decent contribution from these two mines in Metalla’s fiscal H1 2021. Obviously, there are no guarantees that we’ll see new highs in annual revenue with minimal visibility around how COVID-19 could affect operations. Still, these assets moving online and benefiting from a multi-year high in silver should help.

If we look at Metalla’s revenue trend above, it’s ghastly, to say the least, with a nasty downtrend since Q2 2019. However, this revenue trend has been adversely impacted by care & maintenance at Endeavor and COVID-19 related delays at COSE/Joaquin, so it’s hardly an accurate representation of the company’s operations and progress. The good news is that while fiscal Q4 2020 revenue fell off a cliff and came in at C $ 0.1 million, we should see a higher revenue trend in fiscal Q1 and fiscal Q2 2021, with current estimates sitting at C$0.9 and C$1.0 million. While this would still represent negative year-over-year growth from fiscal H12020, it’s a step in the right direction after losing a key asset temporarily (Endeavor Mine). 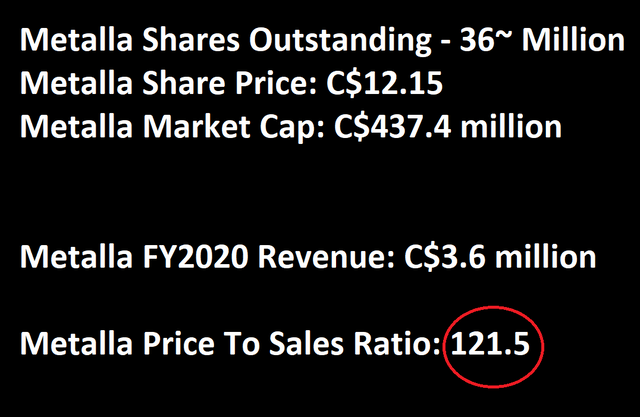 Unfortunately, while the future is bright for Metalla and it’s not all that helpful to look in the rear-view mirror, the stock is not cheap here following its recent rally. This is because Metalla is currently trading at over 120x sales based on a market cap of C$437.4 million and sales last year of C$3.6 million. Even if we adjust to the impact of the loss of the Endeavor Mine and give the company credit for C$6 million in FY2020 revenue, the revenue multiple is still quite high. While this doesn’t mean that the stock can’t go higher, I would argue that valuation is a headwind at C$12.15 (US$9.30). Therefore, if I wanted to start a position, I wouldn’t be paying above US$9.30 for the stock.

Metalla had a disappointing year in FY2020 with attributable silver production and revenues diving year-over-year. However, I see no reason to write off the company because of this, as it was an artificially weak year with no contribution from a key asset and two other key assets delayed. In fact, from an operational standpoint, when it comes to adding new assets, the company had a great year. However, while Metalla’s future is bright, even if we adjust for the headwinds, the stock is a little expensive here at 120x sales without adjustment, and over 70x sales with adjustments for the headwinds. Therefore, while I see long-term upside here for investors with a 2+ year view, I see no reason to chase the stock at US$9.30.

Disclosure: I am/we are long FNV. I wrote this article myself, and it expresses my own opinions. I am not receiving compensation for it (other than from Seeking Alpha). I have no business relationship with any company whose stock is mentioned in this article.