Puma Biotechnology (PBYI) has been one of my more frustrating investments over the past year. I decided to take a stab at PBYI in Q4 of 2019 in anticipation the company was going to address NERLYNX’s tolerability and discontinuation rate. Well, the company has started to address these concerns and the commercial numbers show their approach is being adopted by physicians. Admittedly, I was expecting the Street and the market to praise Puma’s efforts but the share price has yet to recover. Despite my frustration, I still believe PBYI is worthy of a speculative investment at these prices.

I intend to review the company’s Q2 earnings and point out some key points for the bulls. In addition, I discuss some notable downside risks that investors should be aware of. Finally, I defend my investment thesis and how I plan to manage my PBYI position in the coming quarters.

In terms of NERLYNX numbers, Puma sold 3,728 bottles in Q2, which was a 7.6% decrease from Q1’s 4,035 bottles (Figure 2). Puma believes this decrease was due to a reduction in distributor inventory and COVID-19 headwinds. 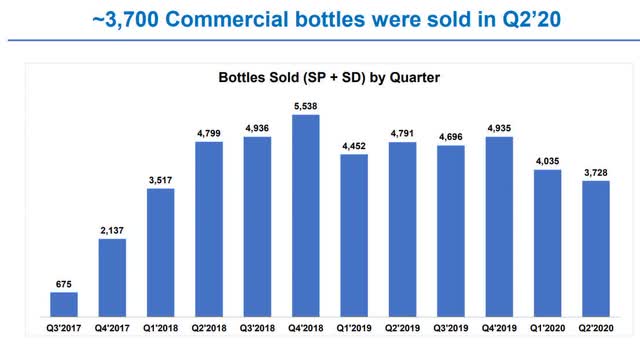 Puma did mention their “commercial access was negatively impacted by the COVID-19 pandemic,” so it wasn’t a surprise to see a reduction in new starts in May. However, the company did see the number in new starts recuperate in June.

Once again, investors should take note of some bullish points found in the earnings report and earnings call. Firstly, roughly 8% to 10% of the company’s new patient starts were in the metastatic breast cancer category, so we can look forward to seeing if that new category can help grow scripts in the coming quarters. Secondly, the company has been promoting their Control study data that shows the importance of proactive management by employing a dose-escalation strategy along with PRN loperamide to improve the discontinuation rate. The company reported that about 31% of new patient starts were started at a reduced dose in Q2, which is a small increase over Q1 (Figure 3).

Hopefully, we see the discontinuation rate improve and more patients remain on NERLYNX.

Thirdly, the company continues to receive significant revenue from their global NERLYNX partnerships. One of their Pacific partners, Specialised Therapeutics, received approvals in Brunei in April, New Zealand in June, and Malaysia in July. The company’s other partners have been plugging away with approvals and launches in their respective territories. However, we are still waiting for some countries in Latin America, Asia, Southeast Asia, and the Middle East to give NERLYNX the go-ahead. 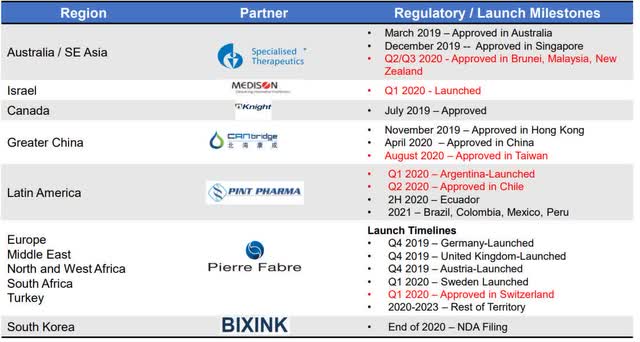 The company’s biggest partner, Pierre Fabre, has been plugging away with their NERLYNX launches. Recently, Pierre Fabre launched NERLYNX in Germany, the UK, Austria, and is preparing to launch in several additional regions (Figure 4). The market might be focusing on U.S. NERLYNX numbers, but longs should find some comfort that multiple companies see the commercial opportunity for NERLYNX in their jurisdiction.

Last but not least is the company’s current financials, which revealed a quarterly cash earnings of $6.2M, compared to a cash burn of $11.6M in Q1. In addition, Puma finished Q2 with $107.3M in cash, cash equivalents, and marketable securities. Between the company’s NERLYNX sales and payments from their partners, Puma’s financial outlook has improved over the past two quarters which will extend their cash runway.

Despite my optimistic outlook for Puma, I have to concede there are downside risks that investors should be aware of. Primarily, the company is still fighting to surpass their previous commercial numbers in Q4 of 2018. Unfortunately, the pandemic is not helping out and Puma anticipates a cut in their full-year 2020 NERLYNX net sales to $200M-$210M from $215M to $225M, so we might not see a new quarterly record in 2020.

Another looming downside risk comes from competition, which could outperform NERLYNX clinically and/or Puma’s commercial abilities. I am keeping an eye on Seattle Genetics (SGEN) and their TUKYSA product for HER2 metastatic breast cancer. Another candidate to watch out for is margetuximab, a monoclonal antibody by MacroGenics (MGNX). I don’t expect these products to completely dominate NERLYNX, but it will be interesting to monitor their commercial success vs. NERLYNX’s. 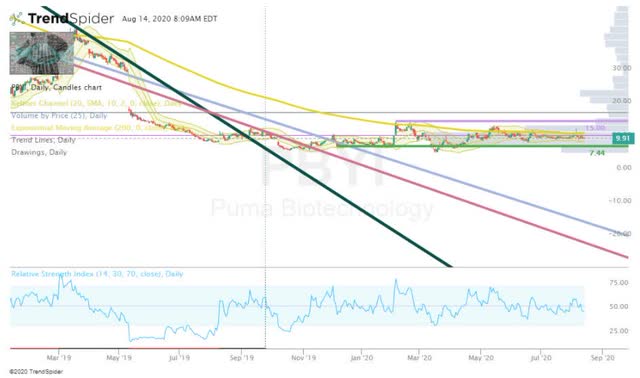 Admittedly, I recognize Puma has yet to surpass their Q4 2018 numbers, so a suppressed share price is justified. However, has the market taken the selling too far? The stock was trading in the $40s following the Q4 2018 earnings after reporting 5,538 bottles sold. Now, PBYI is trading around $9 a share with 3,728 bottles sold in Q2… it appears as if the market is not expecting Puma to recover but is $9 justified?

Looking at figure 6, we can see the Street’s revenue estimates for Puma over the next 9 nine years. It appears as if the Street doesn’t expect the company to report any substantial growth over that period of time, so perhaps a return to $40 per share is not in the cards at this point in time. However, I would like to point out the company’s current forward price-to-sales is about 1.68x for 2020, which is significantly under the industry’s average of 5x. 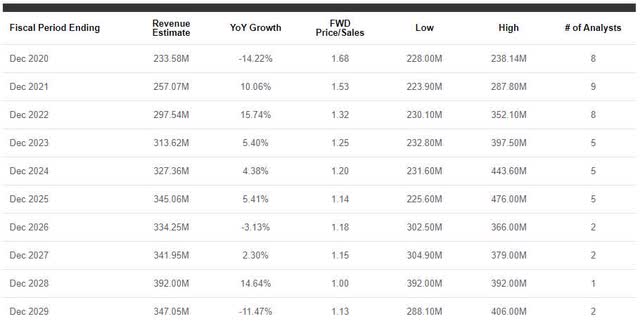 That difference is expected to increase over the course of the next decade and eventually hit 1x 2028, which means their revenue will be equal to its current market cap. Yes, these are just estimates and we don’t know if Puma will pull in $392M in 2028 but it does illustrate how discounted the share price is. Again, we can say the market doesn’t expect PBYI to recover but it already seems to be priced-in. As a result, I am willing to see if Puma is able to continue to fine-tune their commercial strategy and surpass their Q4 2018 numbers. I suspect the Street will need a few quarters of sequential growth before they allow PBYI to be priced in line with the rest of the industry. Consequently, I believe a PBYI investment is going to require some patience and optimism in order to reap the real rewards.

I haven’t touched my PBYI position since April and I am glad that I have been sitting on my hands since then. I originally planned to acquire a full-sized position before the end of the first half of 2020, but some of the COVID-19 tickers distracted me from my other ultra-speculative plays. Now, I am planning to add to my position once the company is able to surpass their Q4 2018 numbers. On the other hand, if the company fails to hit the Street’s expectations, I will liquidate my position and revisit the ticker down the road.

Disclosure: I am/we are long PBYI. I wrote this article myself, and it expresses my own opinions. I am not receiving compensation for it (other than from Seeking Alpha). I have no business relationship with any company whose stock is mentioned in this article.