EUR/USD attempts to retrace the decline following the Federal Open Market Committee (FOMC) Minutes, but recent developments in the Relative Strength Index (RSI) warn of a potential shift in market behavior as the indicator establishes a downward trend in August.

EUR/USD Analysis: RSI Establishes Down Trend Ahead of Fed Symposium

EUR/USD struggles to retain the advance from the start of the month as Federal Reserve officials discuss an outcome-based approach versus a calendar-based forward guidance for monetary policy, and the pullback from the yearly high (1.1966) may turn into a more pronounced correction as the RSI snaps the upward trend established in March after failing to produce the extreme readings seen in July.

In turn, the RSI suggests the bullish momentum will continue to abate over the remainder of the month as the indicator establishes a downward trend in August, but the macroeconomic environment may keep EUR/USD afloat as the Fed’s balance sheet climbs back above $7 trillion ahead of the Kansas City Fed Economic Symposium scheduled for August 27-28.

It seems as though the FOMC is in no rush to alter the path for monetary policy asthe committee vows to “increase its holdings of Treasury securities and agency residential and commercial mortgage-backed securities at least at the current pace,” and the Fed symposium may indicate more of the same for the next interest rate decision on September 16 especially as the central bank extends its lending facilities through the end of the year.

As a result, current market conditions may prop up EUR/USD as “the Federal Reserve is committed to using its full range of tools to support the U.S. economy,” and it remains to be seen if the RSI will foreshadow a shift in market behavior as the account of the European Central Bank (ECB) meeting insists that the EUR 1.350 trillion envelope for the pandemic emergency purchase programme (PEPP) “should be considered a ceiling rather than a target.”

The comments indicate little intentions of providing additional monetary support as the Governing Council “generally felt that communication should aim to strike a balance between acknowledging the improvements in incoming data and stressing the remaining risks,” and President Christine Lagarde and Co. may gradually alter the forward guidance over the coming months as the statement underlines that “the Governing Council should avoid creating new expectations of further monetary policy action.”

With that said, recent developments in the RSI could be indicative of a potential exhaustion in the bullish behavior rather than a change in trend as the FOMC appears to be on track to retain the current policy in September, and the crowding behavior in the US Dollar looks poised to persist over the remainder of the month as retail traders have been net-short EUR/USD since mid-May. 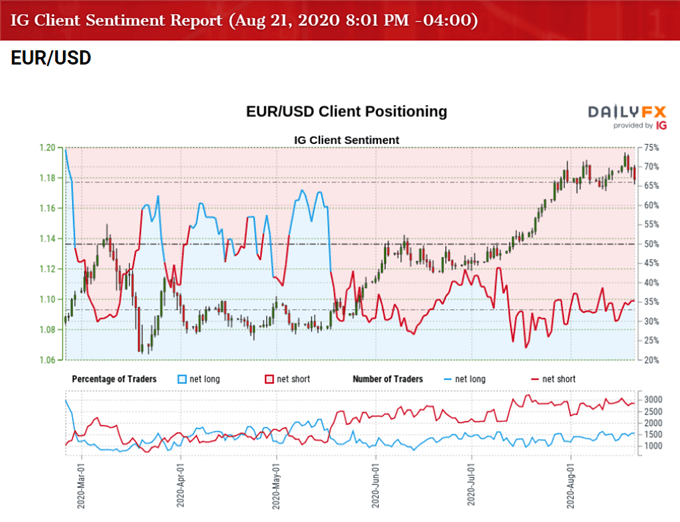 However, the net-short EUR/USD bias remains despite the recent shift in retail positioning, and current market conditions may EUR/USD afloat as the FOMC remains reluctant to scale back its emergency measures.

Gordan Gekko Said It Best In the 1987 finance classic, Wall Street, Gordon Gekko famously told his young and eager, but unproven protege, “I don’t throw darts at a board. I bet on sure things. […]