If you are bullish on gold, I don’t think there has ever been a better time to get into gold miners than right now. With gold at $2000/oz miners are printing money at 50% operating margins, but many share prices haven’t risen more than 50% since the start of the year. Which is much, much less than their increase in earnings with the higher gold price. Furthermore there is a large discrepancy in valuations. Combing through micro cap miners I have found perfectly healthy companies with shockingly low valuations, like Serabi Gold (OTC:SRBIF).

Let me first provide a bit of background for the company. Serabi Gold is a small miner based in northern Brazil in the state of Pará. In 2001 they acquired what has been their only producing asset since then – the Palito underground gold mine, which they first put into production in late 2003. It produced over 100k gold ozs between 2005 and 2008, but the relatively small scale of operations and lack of sufficient skilled underground mining expertise, placed pressure on cash flow and working capital resulting in suspension of production at the end of 2008. In 2014 the Palito Gold mine was started up again, and has been producing gold ever since at an increasing rate. In 2019 Palito produced 40,101 gold ozs at an all in sustained cost (AISC) of $1078/oz. An ore sorter was installed at Palito in Q1 of this year, which will be able to increase production by an estimated 15% by increasing the plant feed ore grade, while at the same time lowering cost.

As you can see above, Serabi Gold is working on getting a second mine into production. The Coringa gold mine, which was purchased in December of 2017 for $22M, is located just 200 km south of Palito. It is practically a carbon copy of their Palito gold mine. They are both high grade (around 8gpt gold) underground operations at similar size, so getting the mine up and running should be smooth sailing. Coringa is expected to produce 38k ozs annually at an AISC of $852/oz with an initial mine life of 9 years. Production is expected to ramp up late 2021, which should drive down overall AISC below $1000, leaving a very healthy profit margin at current gold prices.

Construction is expected to begin late this year or early 2021. Initial capital expenditure is $25M with a high contingency of 20%, considering management experience with this kind of operation. As of 30 of June 2020 the company had $9.6M of cash and cash equivalents, and an outstanding acquisition payment of $10.4M for the Coringa gold mine, which is due in monthly increments of $1M with the balance due shortly following covid-19 travel restrictions ending in Brazil. Earlier in the year Serabi secured a $12M convertible debt deal with one of their large shareholders, Greenstone, so liquidity should not be an issue as they have no other debt. On August 4 they announced an extention on the draw down period of the convertible, which allowed them to put further drawdowns on hold as they might not be needed to pay off the remaining Coringa acquisition payment. At that time they had drawn down $2M.

Considering cash flow levels of $6.2M in EBITDA for Q2 and the gold price moving even higher in Q3, it seems highly likely that they will be able to pay off the final $10M for Coringa in Q3 and Q4 from operating cash flow alone. An important developement that will reduce dilution significantly as the convertible rate is just £0.76/share, well below the current price of £0.92/share. With regards to the $25M initial capex for Coringa I believe relatively low interest non-convertable debt will be possible, as we are talking about the equivalent of only 4 quarters of Q2 level of EBITDA, and again the gold price is even higher now.

Serabi Gold is currently sitting at a market cap of $70.5M with 59M shares outstanding (around 65M on a fully diluted basis including $2M of convertible debt). Last year they produced a net profit of $3.8M. For the first half of this year net profit was $4.2M of which $3.4M is from Q2 alone. So I would already consider Serabi Gold a cheap stock based on the earnings of previous quarters where gold price was significantly below where it is now, especially considering the strength of their balance sheet. The average gold price received was $1647/oz for the first half of this year. Currently the price of gold is $2005/oz.

Looking forward towards late next year when Coringa is expected to enter production, is when the valuation really reaches an astonishing low level. 38k ozs from Coringa + 46k ozs (including ore sorter bonus) at $2000/oz gold is $168M of yearly revenue. Assuming AISC of $1000/oz and administrative expenses of $4M (current level), annual operating profit will be $80M – almost $10M more than current market cap!

Longer term we could even see further production increases as Serabi Gold is sitting on a large land package of more than 50,000 ha with many exploration targets marked for future drilling. Furthermore there are several claims nearby with large gold resources which are not currently being mined. Those could be acquisition targets for Serabi Gold, being the only mining company in the area in production. 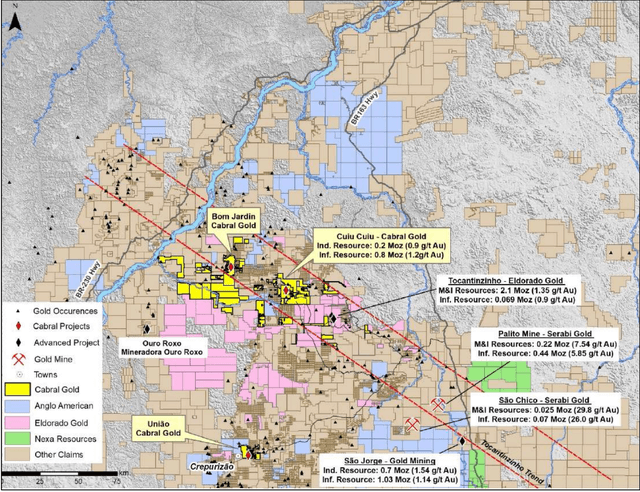 Serabi Gold being located in Brazil, which isn’t exactly a tier 1 jurisdiction, is probably part of the reason for the low valuation. Also being a small operator with only a single mine currently does add some risk to the investment. But their AISC seems to in line with industry average, perhaps a tiny bit above, but with Coringa in production that should improve. Balance sheet is very healthy with the only debt being $2M of convertible notes that are likely to be settled in shares. So if gold prices stays elevated I struggle to see how Serabi Gold will not have gone up several times in value when Coringa comes online.

Typically tier 1 jurisdiction gold miners are valued at several thousand dollars per oz of yearly production. Barrick Gold for example has a market cap of $48B and produced 5.46M ozs last year, which is $8791/oz of production. Serabi Gold is valued at only $1758/oz produced on a trailing basis and $839/oz if you include Coringa. That is less than 1/10th the valuation of Barrick Gold on a forward basis, I don’t think that disparity is warranted at all. Say you discounted Serabi to $4000/oz due to being a smaller mining in a lower tier jurisdiction, that would put them at $4,000 x 86,000 ozs = $336M market cap – more than 4 times higher than the current $80M on a fully diluted share basis. This valuation would give them a modest P/E of around 6 (when Coringa is in production) at $2000 gold, so further upside is definitely possible. Especially if new projects are developed, or of course gold continues to go higher, which wouldn’t surprise me.

Disclosure: I am/we are long SRBIF. I wrote this article myself, and it expresses my own opinions. I am not receiving compensation for it (other than from Seeking Alpha). I have no business relationship with any company whose stock is mentioned in this article.