Record demand for physical delivery of precious metals on the Comex continues apace. I have been covering an ongoing physical gold short squeeze on the Comex at length. What about silver? The situation in Comex silver is different from Comex gold futures, but has key similarities. There is no danger of a squeeze on the bullion banks in silver, AKA the swaps specifically, since their short position in silver is nonexistent. However, like gold there has been a clear surge of demand for physical delivery this year, and judging by the amount of contracts that did not roll over by the August 27 deadline, it looks like September deliveries will also see a near record number of contracts stood for delivery again.

A quick recap and update of the situation for bullion banks in Comex gold futures though: The swaps are digging still deeper into their shorts. The dollar size of the short position for the bullion banks continues to meander near record highs. At 176,779 contracts as of the last Commitment of Traders [COT] report, the net short position has increased by 2,095 contracts since last week. The total dollar value is now $34.5 billion, eclipsed only by the first week of August.

If we look at a chart of the last 5 years excluding the last 6 months though, we find that price and open interest have traded together. 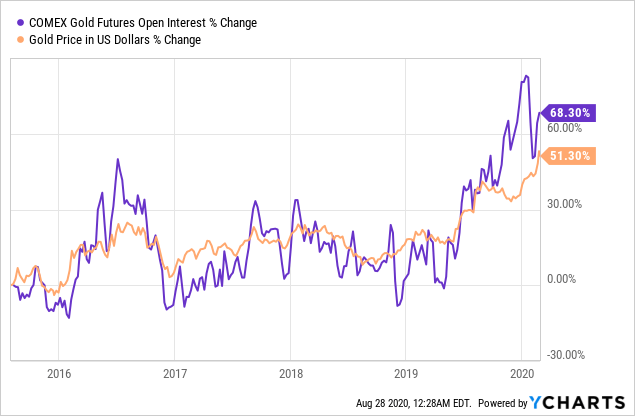 Another anomaly is that the bullion banks now hold the vast majority of shorts on the Comex. 66% of the total net short position belongs to the bullion banks. This is not normal. Looking back at historical COT data from 2006 to 2016 (find it here), the absolute largest share of gross shorts held by the bullion banks any given week was 43%, back in August 2014. The bulk are almost always held by the producers. No longer.

The producers have cut their net short positions by 2,655 contracts since the last COT reports. Why? If the price of gold is so high, wouldn’t they want to lock in these high prices and increase their short position? Normally yes, but by holding back on selling contracts, they may be trying to force the gold price even higher. Somebody has to supply contracts on the Comex, and the producers and merchants are forcing the banks to play a heavier role in this. If the banks don’t provide the contracts, then the price of gold futures would go even higher on lack of sellers. Perhaps the producers believe that if they put more of the sell-side responsibility on the bullion banks, they may be able to force prices higher for a more fundamental long-term revaluation.

The deadline to roll over silver positions for September delivery expired on August 27, and 14,663 contracts remain open. Each silver contract represents 5,000 ounces of physical silver, and the Comex currently has 209.44 million ounces in its vaults. You can find the latest numbers here. That means the Comex has enough physical silver to satisfy 41,888 contracts. Depending on how many of the 14,663 stand for delivery, up to 35% of physical silver stocks on the Comex could be earmarked by the end of the month.

The record for silver deliveries in a month is 17,294 contracts, hit just last month in July. Given the remaining contracts open for September are slightly less, we won’t hit this record but we’ll probably get close. What’s more interesting though to me at least is who is standing for delivery. If we look at the COT reports, it’s unclear at first. Below is the latest disaggregated COT table for silver. 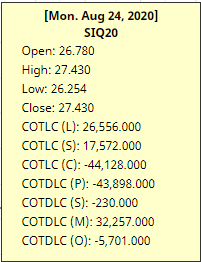 As you can see, the commercial shorts, which include bullion banks and producers, total 44,128 contracts. Adding up producers and swaps (CODLC [P]and COTDLC [S]), the numbers check out for total net shorts. However, the managed money longs, which are the hedge fund speculators, are only long 32,257, and they usually do not take delivery, since they typically use futures for speculating with other people’s money. While the other reportables are individuals who are more likely to demand physical delivery, the others are also net short 5,701 contracts here. So who are the other 17,572 longs? Those are the nonreportables, traders that are too small to trigger reporting requirements. They are grouped in the small speculators category above.

14,663, the number of September silver contracts still open that did not roll over, is pretty close to 17,572, and the latter number is over a week old now so it could have fallen in the meantime. Silver is poor man’s gold, so it would make intuitive sense that those who would be calling for delivery would be smaller players like the nonreportables, as the other reportables are doing in the gold market.

But there is another possibility. The managed money category does not typically take delivery of physical silver, at least not in large quantities. That is, unless a money manager is in the market specifically for physical silver. Eric Sprott anounced on July 16 his intention to buy up to $1.5 billion in physical silver over a 25-month period for the Sprott Physical Silver Trust (PSLV). It could be that his fund is on the long side of the September contract, and that he will (or already did) stand for delivery of the bars. The Sprott Physical Silver Trust holds London Good Delivery Bars of the kind stored in the Comex vaults, so it would make sense that he could be standing for delivery of at least part of that $1.5 billion shelf order to issue PSLV shares.

One more anomaly has occurred in Comex precious metals futures recently that deserves attention, and that is the first movement for deliveries in the new 4GC contract. The 4GC contract is the Gold Enhanced Delivery futures launched in March during the initial lockdown panic. The contracts are deliverable in 400oz London Good Delivery Bars rather than the 100oz bars on standard Comex gold futures. The contract hasn’t been used much, but the first physical deliveries for this contract were made on August 20. A total of 24 contracts were delivered.

The interesting part though is that the day before, open interest for the August contract was precisely 24. Screenshot below.

Meaning, all longs stood for delivery on the same day. This suggests that there is only one player in this contract, and that this single player is using 4GC exclusively for physical delivery. This potentially means that the 4GC contract could serve as a proxy for physical gold demand. If demand for physical gold increases, we may see volume on the 4GC contract start to swell. So far it hasn’t, but satisfying physical demand is in fact the very purpose of its existence.

Since September and October are not active contracts in the regular 100oz gold futures, the next line in the sand for physical deliveries is on Black Friday, two business days before the first business day of December for the active December contract. This is the case for both gold and silver. We came close to record deliveries for August gold, pushing 50,000 contracts, just short of the 55,000 record hit in May. There is a good chance that we could break that record in December as well as the silver record hit in July, and see more deliveries in the 4GC contract as well in a spillover effect.

All in all, as physical demand for gold and silver is not abating, any correction could be short-lived. In the meantime, it will be very difficult if not impossible for the bullion banks to close their short positions or even lessen them in such an environment.

The End Game Investor is dedicated to protecting real wealth and helping subscribers profit during the ongoing global fiat monetary collapse. Coming from an Austrian School perspective on economics, we discuss ideas like this one and other more exotic ones using a variety of vehicles that are low-risk/high reward. If you suspect that something is seriously wrong in the monetary sphere and that the US fiat dollar standard is in existential danger, then take a peek at what we’re doing to prepare for the end game with a two week free trial, lest the end game catch you unprepared.

Disclosure: I am/we are long PSLV, SLV, GLD, AAAU. I wrote this article myself, and it expresses my own opinions. I am not receiving compensation for it (other than from Seeking Alpha). I have no business relationship with any company whose stock is mentioned in this article.

Gordan Gekko Said It Best In the 1987 finance classic, Wall Street, Gordon Gekko famously told his young and eager, but unproven protege, “I don’t throw darts at a board. I bet on sure things. […]