It’s not the recession that matters

It simply is not that we’ve had a recession that matters to the valuation of the stock market:

That slump in the index in February – a month before lockdown for the UK – is the recession bit. For markets are forward looking, not backward. What determines what the market is today is what we think the economy – and thus profits – will be like tomorrow and off into the future.

That we’ve had a recession is thus interesting in a historical sense, and we’re concerned about those who might, still, not survive it. But the general level of the markets is thinking about the recovery.

We have the Flash PMI for the month:

“UK private sector companies reported a sharp and accelerated increase in business activity during August, with both the manufacturing and service sectors continuing to experience a recovery in customer demand. The headline seasonally adjusted IHS Markit / CIPS Flash UK Composite Output Index – which is based on approximately 85% of usual monthly replies – registered 60.3 in August, up from 57.0 in July and signalling the fastest rate of business activity expansion since October 2013. Manufacturing production (index at 61.6) increased at a slightly quicker pace than service sector activity (60.1) during the latest survey period. Higher levels of private sector output were overwhelmingly attributed to the reopening of the UK economy after the lockdown period in the second quarter of the year and a subsequent increase in both consumer and business spending.”

A reading of 60 and above is really very high indeed. 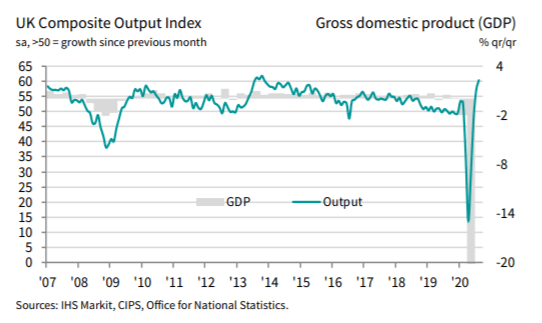 So, as far as any country is bouncing back, the UK is. Sure, we don’t know how long this is going to last and therefore how close to normality we’re going to get but we have other numbers.

The investment bank Jefferies has been looking at other real time numbers. Things like traffic congestion, energy consumption and so on:

“Jefferies, the investment bank, said yesterday that energy consumption had risen by 500 basis points in the past week and was at 97 per cent of normal levels, while traffic congestion was up from 87 per cent to 90 per cent.”

It’s worth pointing out that the UK doesn’t, really, use aircon, so it’s not the current high temperatures driving that energy consumption.

Similarly, Lloyds is tracking other measures:

“Lloyds said that the UK economy was recovering more strongly than many other advanced nations. Its UK Recovery Tracker climbed to 57 last month, higher than the 50.3 for the US and 54.9 for the eurozone.”

None of these numbers are conclusive of course. Only the actual GDP numbers themselves will be and we’ll only get them to any useful level of accuracy a couple of months after the economy has recovered. Thus, our peering into the future with these proxies.

We’ve also got to remember one other thing. The UK’s loss of GDP was very much higher than in other similar economies. This is because the Office for National Statistics tried to count the economy properly, but differently from everyone else. They included the effect of lower provision of government services. No one else did.

So, the collapse in GDP in the UK looks very much worse than everyone else’s. Do note what happens here though. As the NHS opens up to routine operations again, as the schools reopen in September, this same effect will go into reverse. The ONS will list the UK economy as growing strongly because of these two things while other countries won’t measure this change in output at all.

A leap in UK GDP is cooked into the figures for the autumn already. This is beyond those stories of rising electricity consumption, traffic and other measures.

I have long been – and vocally too – of the view that we’re going to see a V shaped recovery from this recession. I won’t, because I can’t, say that these numbers prove it. But they’re not evidence against the contention so it still stands as being as yet not disproven.

There is still risk here the recovery could still go wrong. It is also true that the FTSE 100 isn’t quite about the UK economy, too much of the income is from abroad for that. But it currently looks about correctly priced for the idea of a swift recovery. Thus, macroeconomics doesn’t give us a buy or sell signal here, it just tells us that current pricing looks about right.

Our efforts therefore have to be on the microeconomics of individual companies and situations.