Dunelm (OTCPK:DNLMY) is a British furniture retailer. It’s been several years since it was last discussed on Seeking Alpha, in John Kingham’s piece Why I Still Hold Dunelm Despite Its Recent Share Price Decline.

The company has a solid market position, but its shares, near their year highs, have little increase left to attain, for now. At the current price of 1,524p, I would avoid.

Dunelm is a leading furniture and homewares retailer in the U.K. Indeed, it says that it is the number one homewares store in the kingdom. It operates shops nationwide selling housing products under its own folio of brands. It has 170 superstores and a couple of high street shops. It operates a chain of cafes called Pausa which has a presence in most of its shops. It also has its own manufacturing facilities in the U.K. for made-to-measure products. Additionally, the company sells online.

The split of sales by channel is as follows. Although online is meaningful and is growing at a very strong rate, the majority of the business is still done in the physical store estate.

Its product range comprises 50,000 lines including exclusive offerings not carried by other retailers.

While revenue has moved smoothly upwards, profit has been a bit less consistent. 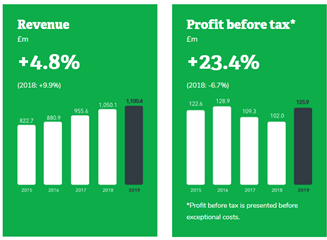 That was partly pinned on weaker management at the time, and there was a management reshuffle in 2017, which seems to have coincided with improved performance afterwards.

At this point, the business model looks pretty robust.

Furniture demand in the U.K. is set to increase this year and next. 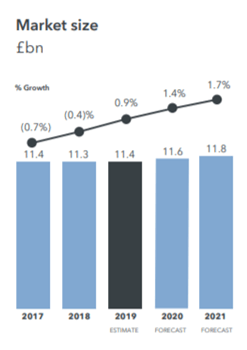 Homeware demand in the U.K. is on an upwards trajectory year after year. 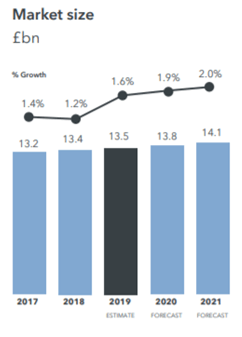 Dunelm is the leading player, so is a price giver to some extent, and the wider market is struggling. For example, John Lewis was once the homeware supplier of choice to the middle classes, but last time I wanted a U.K. made tea towel there (the Ulster linen blend ones are excellent), it only had lower-quality imports. That approach has dented confidence in the quality of John Lewis over the years, and its new chief executive seems out of her depth in a brutal retail environment. John Lewis was already facing significant challenges to its strategy before the compounding negative effect of COVID-19 lockdown. I expect Dunelm’s main competitors’ travails to be to Dunelm’s long-term benefit. Plus, although online is a threat, it is also an opportunity. Dunelm has focused on optimizing its online model and scaling it up, as the 35.1% revenue growth for online in the latest set of full-year results shows. It offers 55,000 products online, almost double the 30,000 lines offered in-store. It plans to add a net 6,000 products to its online-only ranges in the current year, many of which will be own label products. Last year it also increased its focus on online ranging and trading across its product categories. I therefore don’t see any increase in the percentage of goods bought online as an inevitable threat to the company.

I have had a succession of bad experiences investing in U.K. retailers over the years, most recently with the demise this year of Laura Ashley (OTC:LARAF), which also sold furniture and homewares. While its demise may also be to Dunelm’s benefit, it and the many other retailer failures in the U.K. do raise a question over the long-term investability of a company like Dunelm. The company has a number of advantages: its focus on out-of-town center locations lowers costs, its model of leasing not owning shops keeps the balance sheet slim, its own brand products are popular with shoppers and its price point is more competitive than, for example, was the case with the more upmarket Laura Ashley. But it is worth noting that the U.K. retail sector has had difficult economics for many years and that may continue. There will be winners, and Dunelm could be amongst those, but as with its competitors, it will need to fight hard to maintain relevance.

The Company Has Navigated 2020 Decently to Date

Lockdowns have seen a surge of home decoration in the U.K. as elsewhere, with people taking time to renovate their living spaces and in some cases kitting them out for more homeworking. That has fed through to demand at companies like Dunelm, but with shops closed for all or some of lockdowns, sales performance was inevitably affected.

In a trading update this week, it noted total year-over-year sales growth was 59% in July and 24% in most of August.

However, that comes on top of a very rough April and May, due to store closures in lockdown.

So, despite the figures this week which were well received by the market, the reality is that July and August’s strong figures are largely likely to be due to demand pent up in April and May. The surge in online sales does underline why Dunelm’s investment in that channel has helped it grow.

In announcing its Q4 figures, the company stated that it had full-year sales of £1,057.9m, a 3.9% reduction on the prior year, which in the context of a mostly locked down or disrupted final quarter I think is a creditable performance. It set out an expectation of pre-tax profit in the range of £105m-£110m. That was a fall from £125.9m the prior year, slightly impacted by a change in accounting standards, but on balance I think the company has done quite well to provide a relatively smooth performance in challenging times for retail.

Operating in leased stores, it has fairly low net debt of around £45 million. As at 21 March, it had £25m in cash and planned to draw down approximately £160 million from its revolving credit facility to boost liquidity. So its balance sheet, while slim, is in good shape.

However, profit for 2019 had hardly shifted from five years before, and the latest full-year figures are expected to show a drop. While the company is a strong player in its field, a P/E of 30 feels a bit pricey.

Conclusion: A Best-in-Breed Retailer, But Priced for Perfection

I like Dunelm, I think it is in good shape with its business model and finances, and expect it to continue to do well. However, shares currently at 1,524p and a P/E of 30 allow little to no room for management error. I don’t think it offers value, for now.

Dow, Nasdaq, USD Talking Points Stocks put in a strong gap-higher to start this week’s trade, further recovering a portion of the September sell-off. At this point, both the Dow and Nasdaq have retraced approximately […]