E-L Financial [TSX:ELF](OTCPK:ELFIF) is a holding company based in Canada, with their primary investment in a life insurance company. The firm also makes investments at the corporate level in equity markets, and owns large stakes in two closed-end funds and a small shipping company. They can best be thought of as a holding company for investments made by the founding Jackman family, and they trade at a significant discount to any reasonable assessment of their value, probably because of that family control. In many ways, E-L is the Jackman family office, and happens to have some public participation.

However, management has been doing a good job recently managing the business. Their investments meaningfully outperformed the MSCI World index during Q1 of 2020, and they did an absolutely masterful job buying back stock at the bottom of the market decline in March.

The shares trade with better volume in Canada, and all figures in this report are in Canadian dollars. This is illiquid because of the large insider ownership, so limit orders and patience are a must.

Before I go further, I want to talk about this buyback, because I think it was an excellent bit of capital allocation. The general consensus among shareholders for some time has been that buybacks would be a great idea. However, the firm hasn’t been doing them at all. Then, on March 9th they filed a normal course issuer bid to buy back 5% of the company, which is the maximum allowed under Canadian rules on the open market. For them that is about 200,000 shares, and by the end of March they had bought back over 140,000 at an average price of $573.37. It shouldn’t surprise anyone that March 2020 was a long-term low for the shares. In fact, they haven’t traded at that price since the middle of 2013. Shares appreciated dramatically that year as they sold their former property and casualty subsidiary at a big premium to book value, and paid a large special dividend ($75/share) with a portion of the proceeds.

So on a long-term basis it seems like a good time to have bought back shares. It also seems that they did a good job tactically. The price of the shares closed below $573 for exactly 5 days during the quarter (and also those same five days for the last 7.5 years…) so their timing was excellent. From a valuation point of view that is meaningfully accretive to remaining shareholders, even though it is only 5% of outstanding shares. It is also indicative of a value investing mindset at the helm, which is important when making investments in a big portion of the value of the firm. They did finish off the 5% NCIB after the end of the quarter, so they have bought back their maximum this year without conducting a tender at an overall price per share of $599.18.

It is also worth noting that both the closed-end funds they control have started buying back shares. These have been trading at huge discounts for literally decades, and to my knowledge haven’t bought back shares since their founding in the first half of the 20th century. These factors, along with the $25 special dividend E-L paid in early March suggest to me that management is prioritizing shareholder returns.

Their primary operating subsidiary is Empire Life. This is a plain vanilla Canadian lifeco, selling life insurance, annuities, group health, and investment management services within Canada. This market is dominated by Canada’s “Big 3” lifecos: Manulife (MFC), Sun Life (SLF), and Great-West Lifeco (OTCPK:GWLIF). All three are much larger than Empire, and all three would find Empire a very accretive acquisition, because of the significant expense synergies of plugging Empire’s existing business into their own existing employee infrastructure. It is likely that the majority of Empire Life’s fixed costs could be eliminated by any of the three. The fact there are three potential bidders (who would all have huge synergies) makes it likely that any time E-L wanted to sell there would be at least two motivated bidders to hold an auction.

Empire Life is consolidated with E-L’s financials, as they own 99.4% of the firm. However, it files separate financials with Canada’s version of the SEC, because Empire Life has outstanding preferred shares of its own.

I think the best way to value Empire Life is using the metrics of its competitors, given it doesn’t trade publicly.

Source: Tabulated by the author from TMXmoney.com

The average P/B is held down materially by Manulife’s very low P/B. It is worth noting that Manulife has over $10 billion of goodwill and intangible assets on its balance sheet, so its price to tangible book ratio is much higher. That goodwill stems from its large acquisition of John Hancock (in the US) as well as its 2014 acquisition of Standard Life’s (OTCPK:SLFPF) Canadian unit. I think it is very much worth noting that Manulife paid 1.9X book value and 19.5X earnings for Standard Life Canada. Interest rates (and thus lifeco valuations) were higher then, but the idea of a buyout being at a premium (to account for synergies) is very much still possible. That said, while a sale of Empire Life would potentially be a big catalyst, it isn’t something I’m counting on. I’ll assume it is worth just 1.0X book value, which I believe is quite conservative. That also works out to just under 10X 2019 earnings, so not excessive on that metric either.

E-L raised $200 MM in debt recently. They did so with a bond offering of 30-year notes with a 4% coupon. That is pretty low cost, long-term capital, and I’d expect that they want to deploy it in some way. It seems at least possible, given the recent large buybacks, that they might choose to deploy some of the funds to a special issuer bid, or even a full take-private offer. That $200 MM would cover 7.8% of the market capitalization at the current price, and they could easily liquidate investments to complete a take private if they wished. Another possibility is that they might choose to fully take over one or both of their controlled closed-end funds. Economic Investment Trust [TSX:EVT] might be the better choice between the two funds because it owns a significant stake in E-L itself. Thus, buying out EVT at NAV (which would be a big premium to EVT’s share price and would get huge support) would effectively buy back a huge amount of E-L stock at the current very low share price.

Other Assets and Valuation

Their other assets are basically all common equity investments. Some of them are held in closed-end funds, and many of them are held directly. They are internationally diversified, and performance has been reasonable. They outperformed the MSCI World Index quite substantially in Q1 during the worst of the COVID-19 draw-down. That index is up 7.1% since their most recent report as of the end of June; so I expect their next quarterly results to show significant investment gains and a considerably higher book value per share. That is a potential catalyst, as their valuation will show as even more dramatically undervalued than it does now. I’m going to update their directly held investments for 80% of the change in the MSCI world index since March 31st, so a 5.7% uplift. They have a conservative bent, and seem to outperform during down markets and underperform during rising markets, which given the current market level seems like a reasonable positioning to strive for.

I won’t include in that uplift their 52.6% stake in closed-end fund United Corporations (OTC:UCPLF) which is accounted for on the corporate investments line. They consolidate this investment, so it is held NAV. You can make an argument for this treatment – because they own more than 50% of the fund, they could choose to liquidate it at any time. Thus, while a large discount is appropriate for a CEF that you can never liquidate, one that you can liquidate at any time is probably worth NAV. Nonetheless, for conservatism I’m going to adjust the value to the market price of United Corporations. I will use the most recent market price for UNC to make this adjustment. While both market and NAV are up since March 31st, current market is below the NAV then, so the adjustment is negative.

Finally, given this is an asset-based valuation, I’m going to deduct 20X their corporate G&A as a way of capitalizing their ongoing costs. These costs were $37 MM in 2019, so that works out to a $740 MM deduction from the value of the firm.

Finally, I’ll mark to market their stakes in EVT (another closed-end fund) and Algoma (OTC:AGMJF). So on a sum-of-the parts basis, I get the following: 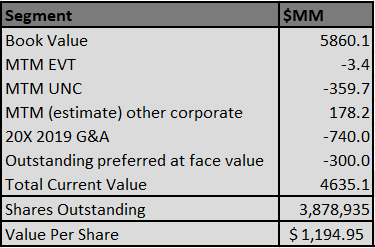 Their current share price is at only 46% of book value, which is essentially absurd given how liquid their book value is. I think in the short term, them reporting materially higher book value will be at least a bit of a catalyst here. Even if they recover only to 55% of book value where they traded at the start of the year, that would be a 20% return.

E-L Financial isn’t very complicated or very sexy. The firm runs a life insurance company and makes investments. One way to look at it is as a closed-end fund. The huge discount to NAV isn’t appropriate given the very small management expense ratio here, in my opinion. It is also likely that Empire Life is worth more than its book value, but I’ve valued it at 1.0X book for conservatism. If they ever chose to sell Empire Life they’d have multiple bidders and would likely get a high price. Since I have no idea when or if that will happen, I haven’t included it in my valuation, but it is a source of further potential upside. Especially since they sold their property and casualty business in 2014, suggesting they are willing to sell when the price is right. I think the discount to book value will narrow materially here given that management has begun value creating actions for shareholders (dividends and buybacks) and if it doesn’t, I suspect management will consider taking it private. I also think it is likely the proceeds of the recent bond issuance get used for some sort of shareholder-friendly option, with a tender for shares the most likely option. Even if there isn’t a near-term catalyst, at the current price I’m willing to hold for future returns. There is significant leverage to their investment returns from the multiple discounts to book in the structure (i.e., ELF trades at a discount to market value of EVT/UNC, which trade at a discount to the value of their investments). That will magnify the returns on their investments, which is a good thing given they have a diversified portfolio of conservatively selected businesses.

Most of my best ideas are not released to the public, and are instead exclusive for members of The Microcap Review. Members get value stock ideas, plus net-net ideas, plus multiple special situation ideas every month. The special situations include merger arbitrage, liquidations, tenders and more. The price of the service will increase Oct 1st, but those who take a two-week free trial will be grandfathered at the current price. That free trial allows you to check the service out with absolutely no risk, and if it isn’t for you, you can cancel online with zero hassle.

Disclosure: I am/we are long ELFIF. I wrote this article myself, and it expresses my own opinions. I am not receiving compensation for it (other than from Seeking Alpha). I have no business relationship with any company whose stock is mentioned in this article.

As you know by now, I make a stock purchase every single month no matter what is going on in the world and despite the doom and gloom headlines. Perhaps I am naive or more […]