Looking ahead, Euro-area retail sales for July headline the economic docket ahead of US initial jobless claims data for the week ending August 29.

Recent comments from Isabel Schnabel suggests that the European Central Bank is reasonably content with its current policy stance, as the ECB Executive Board member stated that “as long as the baseline scenario remains intact, there is no reason to adjust the monetary policy stance”.

Although the central bank’s policies were calibrated “based on the June projections”, Schnabel appears confident that while “we are seeing a certain resurgence of infections, at the moment it looks unlikely that we are going to see a full lockdown again [which] is precisely what we assumed in our baseline scenario in June”.

Get Your Free EUR Forecast

These statements imply that the ECB may save its monetary stimulus ammunition at its upcoming meeting on September 10, unless a surge of Covid-19 infections force regional governments to impose economically devastating restrictions.

In the interim, the Euro may slide lower against its major counterparts after ECB Chief Economist Philip Lane flagged the currency’s “repricing in recent weeks” as a potential headwind hampering the central bank from achieving its inflation mandate.

However, if upcoming fundamental data continues to support the Euro’s recent appreciation, it remains relatively unlikely that European policymakers will act to drag the currency lower. 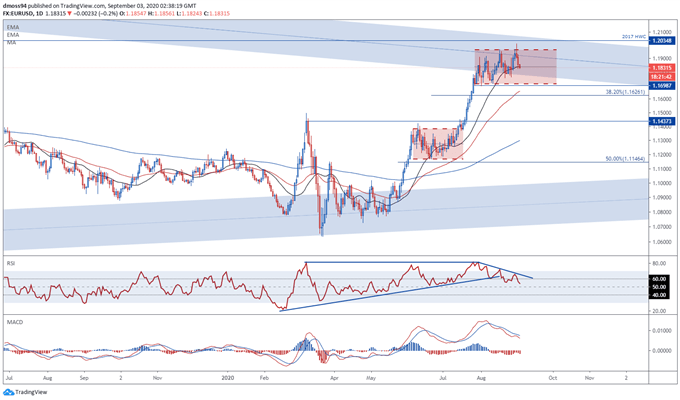 From a technical perspective, EUR/USD rates continue to consolidate in a Bull Flag pattern just shy of the psychologically pivotal 1.20 level, suggesting that the Euro may extend its climb against the US Dollar if buyers can overcome resistance at the August high (1.2011).

That being said, the RSI and MACD indicators hint at fading bullish momentum as they continue to retreat from their respective yearly extremes.

Moreover, the gradient of the 21-, 50- and 200-day moving averages have notably plateaued in recent days, hinting that selling pressure may swell in the near term. 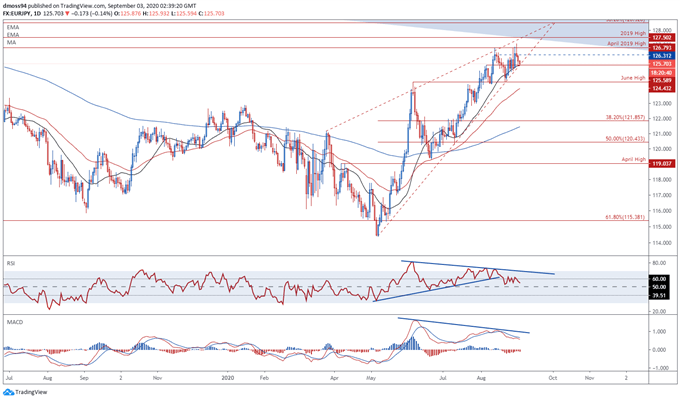 EUR/JPY may be at risk of a significant pullback if support at the August 6 swing-high (125.59) and Rising Wedge support fail to stifle selling pressure.

However, price is still constructively perched above the 21-day moving average (125.50) and 125 level, whilst the RSI and MACD indicators continue to tracking in positive territory.

Therefore, a retest of the April 2019 high (126.79) could eventuate in the coming days if wedge support remains intact, with the apex of the bearish continuation pattern implying price may push to test the 38.2% Fibonacci (128.52) before potentially reversing lower.

On the other hand, a daily close below the 125 level would probably ignite a more sustained pull back in EUR/JPY rates, with key regions of downside interest falling at the June high (124.43) and trend-defining 50-DMA (124.10).