Financial stocks have radically underperformed the broader equity market as overnight interest rates have remained pinned at 0%, and the long end of the yield curve refuses to steepen meaningfully.

While the S&P 500 is boasting positive gains for the year, and with the technology sector posting returns north of 20%, financial stocks have significantly lagged.

The weak performance out of financial stocks and regional bank stocks, more specifically, is not a new trend that started after the COVID-19 crisis.

Regional bank ETF (KRE) peaked in the summer of 2018 and has declined more than 40% to date.

Financial stocks and regional banks, most specifically, are suffering under three main conditions.

First, the flatness of the yield curve and the short-term rates pinned at 0% are reducing the net interest income and net interest margin for most lenders. Regional banks are more exposed to low interest rates and a flat curve compared to larger diversified banks with more revenue lines.

As the US economy moves into a new monetary policy regime, with interest rates pinned at 0% for what consensus believes is at least the next five years, earnings growth will be challenged at any institution that derives a majority of income from interest spreads and loans.

We have never shorted any large diversified banks for the reasons outlined above and instead have only held an unfavorable view among the financial institutions most likely to be impacted by the new “Japanificaiton” of monetary policy.

Below we’ll outline the three main factors working against regional bank ETF KRE and why this sector, despite its low PE Ratio, should be on your avoid list. If you want to remain exposed to financial stocks, there are companies that are less sensitive to the new Japanification of our monetary policy.

Regional Banks Have Limited Or No Earnings Growth

Since the end of 2018, when the Federal Reserve started slashing interest rates amid the slowdown in the global economy, regional banks have been under pressure in terms of net interest margins and net interest income. 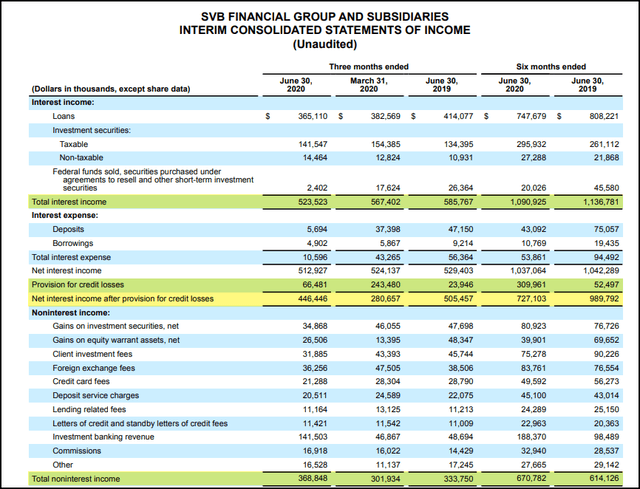 Based on the company filings and the commentary from management, lower interest rates and tighter spreads across the Treasury curve are a headwind to income and earnings growth at the top holdings in regional bank ETF KRE.

Looking at net interest margins, we see a declining trend across the top three holdings. 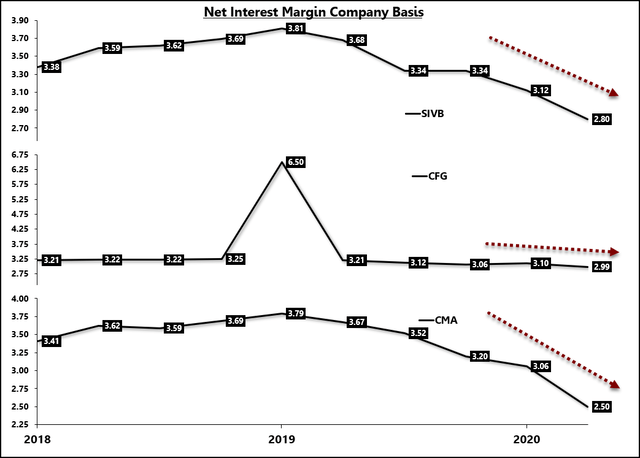 Of note, the decline in net interest margins was exacerbated by the decline in interest rates after the COVID-19 crisis. Still, the trend started in late 2018 or early 2019, a similar starting point to the decline in the expected Fed Funds rate, graphed below. 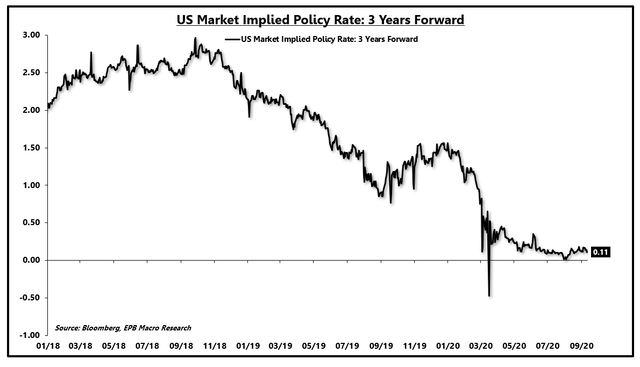 The expectation for rates to stay at 0% for an extended period of time is flattening the Treasury curve through the belly (out to five to seven years). The long Treasury rate, however, also refuses to steepen to levels that are normally seen after recessions.

After the last three recessionary periods, the spread between 30-year rates and two-year rates widened to more than 300bps.

Today, even after some volatility on the long end, the spread between 2s and 30s is less than 130bps.

Hindered by a crushing debt overhang, discussed at length here, long-term interest rates will struggle to normalize, as the rate is most impacted by the future expectations of real GDP growth, the expected path of the Fed Funds rate, and long-term inflationary expectations.

One of the primary functions of banks is lending to the real economy. As the COVID-19 crisis has reduced the creditworthiness of the country in aggregate, particularly without more fiscal support, loan growth is starting to contract rapidly.

During the height of the crisis, the Federal Reserve started large-scale asset purchases “QE” again, which boosted the growth rate of the M2 money supply to over 80% on a 13-week annualized basis.

While QE contributed to the rise in money growth, bank lending growth also surged north of 30%, which significantly increased the growth rate of the money supply.

Loan growth increased due to corporations drawing on their existing credit lines to prepare for a revenue gap, as well as PPP loans backed by the government.

Banks were willing to extend PPP loans as the credit was guaranteed.

Without the guarantee, banks are unwilling to lend in the aggregate to an economy that has reduced creditworthiness.

The 13-week annualized change in bank loan growth has dropped from over 30% to a negative 11.6%. 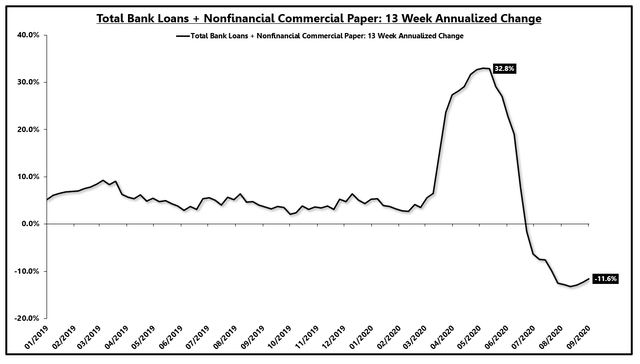 If PPP funds are reloaded by congress in the next stimulus bill, we could see another rise in C&I loan growth and a resulting increase in money supply growth.

Without more aid, however, banks are likely to remain tight in terms of lending conditions as the economy still struggles with 11.5 million jobs missing relative to the peak in employment early in 2020. 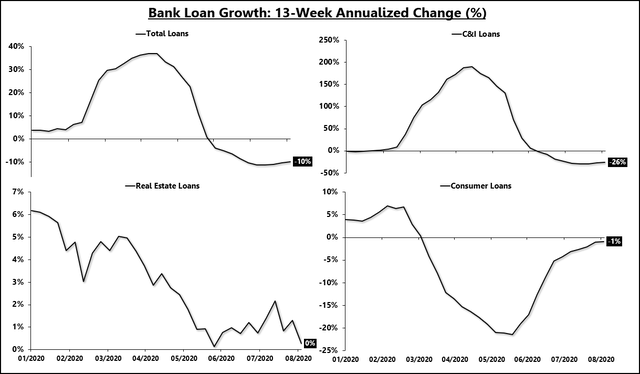 After recessions, it’s common for loan growth to remain weak or negative (a deleveraging) for many years as employment takes time to recover, and creditworthiness is re-established.

It still remains unclear how much permanent damage has been done to the labor market from the COVID-19 crisis. 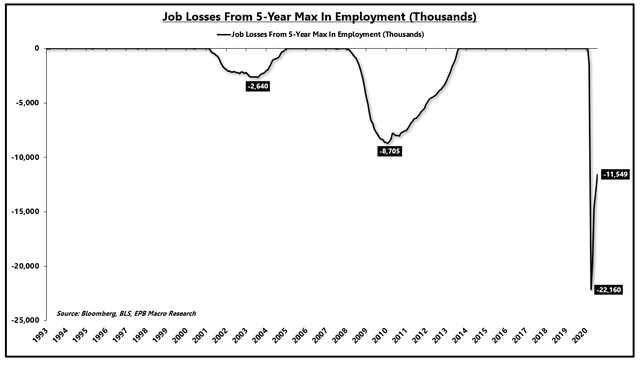 The economy is certainly recovering, but with still 11.5 million jobs missing, the labor market is more impaired than the depths of the 2008 crisis. It will take time for the labor market to normalize, and loan growth will remain weak during the recovery process.

Weak and contracting loan growth is another significant headwind for any business that’s dependent on lending to the real economy.

Regional Banks Are A Value Trap

In recent years, regional banks have traded from a 17x PE ratio to single digits.

The PE ratio in the chart below is defined as the current price divided by the three-year max in EPS estimates to smooth out recessionary distortions.

The GICS level 4 regional bank sector was used as a proxy for ETF KRE.

As the multiple in the banking sector was declining alongside worsening fundamentals outlined in the first two sections, investors tried to catch a falling knife all the way down to a PE ratio of 8x. 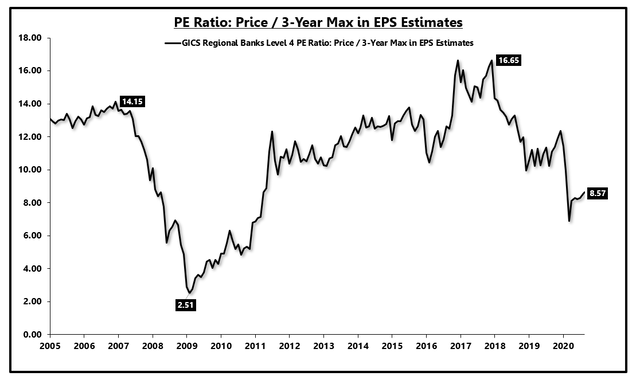 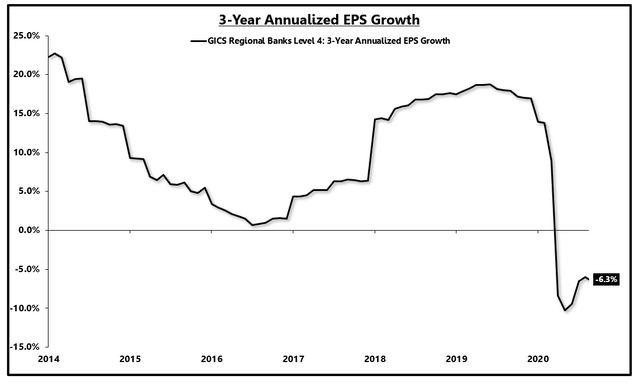 The Federal Reserve has declared a rise in interest rates will not come upon the first sighting of inflation. In fact, interest rates may not rise until inflation averages 2% over some longer period of time.

Over the last 30 years, core inflation “CPI” averaged less than the Federal Reserve’s 2.0% target. Under the new monetary policy regime, that would imply no rate hikes for almost three decades.

While that seems impossible, it’s worth noting that it took more than half a decade to raise rates after the 2008 crisis, the economy is far more indebted today relative to 2008, and Europe and Japan have been stuck at 0% or negative rates since the last crisis.

Currently, regional banks have major headwinds, and the possibility of low rates and no interest rate hikes for more than a decade must be discounted by the market. Should 0% interest rates become an eventuality for a decade, regional banks do not offer much value, even at a single-digit PE ratio.

The secular headwinds facing regional banks has been a concept we’ve discussed in prior articles, such as: KRE: Regional Banks Face Structural And Cyclical Headwinds | Jan 24, 2020.

Regional bank stocks have radically underperformed the broader equity market both before and after the COVID-19 crisis due to the secular headwinds of falling interest rates.

The market is not forecasting the overnight policy rate to rise for more than three years, and the possibility for a Japanification of US monetary policy is firmly on the table.

Banks In Europe and Japan:

Lower interest rates and weak/contracting loan growth will continue to put pressure on the industry that has fewer revenue offsets as compared to diversified conglomerate banks.

While regional banks continue to trade at lower and lower PE Ratios, the relative performance chart looks similar to the nominal performance of banks in Europe and Japan.

Investors will continue to shun regional banks, despite the lower PE Ratio, if earnings growth and revenue growth remains a challenge under low interest rates, a flat yield curve, and weak/contracting loan growth.

Credit card companies that take limited or no credit risk or even more diversified financial institutions likely offer more value than regional bank stocks, which should remain on your list of companies to avoid.

EPB Macro Research provides macroeconomic analysis on the most significant long-term and short-term economic trends, as well as the impact on various asset prices, including stocks, bonds, gold, and commodities.

If you want to learn a long-term investment framework that you can rely on in any market, click the link below.

Disclosure: I am/we are short KRE. I wrote this article myself, and it expresses my own opinions. I am not receiving compensation for it (other than from Seeking Alpha). I have no business relationship with any company whose stock is mentioned in this article.

2/2 © Reuters. FILE PHOTO: American flags representing 200,000 lives lost due to coronavirus are placed on National Mall in Washington 2/2 By Tom Hals (Reuters) – U.S. businesses with COVID-19 outbreaks are facing an […]

Global risk appetite continued to sour this past week. In the United States, the Dow Jones and S&P 500 declined while the tech-heavy Nasdaq Composite managed to inch out a cautious rise. The haven-linked US […]