RBNZ Dovishness May Weigh on NZD

Governor Adrian Orr’s indication that the Reserve Bank of New Zealand is “actively preparing a package of additional monetary policy tools to use if needed” had surprisingly minimal effect on the local currency, as it erased yearly losses and pushed to a fresh yearly high against the US Dollar on September 2.

The New Zealand Dollar also pegged back recent losses against its major counterparts as Orr left foreign exchange intervention off the list of “additional tools that could be deployed [which] include negative wholesale interest rates, further quantitative easing, direct lending to banks, and ongoing forward guidance about our intentions”.

However, the RBNZ appears hell-bent on doing more in the coming months to support the local economic recovery, as the Governor stated that although “we have managed to get overall interest rates in the country low, our challenge is to make sure they go lower again, lower still, and they remain low until we achieve our goals around inflation and employment”.

With the central bank predicting that the nation’s jobless rate will rise to 8.1% by the end of the year and inflation will ease to just 0.4% by the first quarter of 2021, the provision of additional stimulus measures seems almost certain.

Nevertheless, New Zealand’s success in dealing with the novel coronavirus pandemic could limit the overall impact of restrictions on the economy and tame the RBNZ’s desire to do more.

The decision by Jacinda Ardern to ease lockdown measures in Auckland, New Zealand largest city, could fuel NZD in the near term, as the Prime Minister stated that “our testing shows that it is highly unlikely there is Covid anywhere else in the country”.

However, Ardern stopped short of returning to restriction-free living, stressing that “the last thing we want from re-opening Auckland is to spread the virus around the country, and that is one of the reasons we continue to have level 2 settings across New Zealand”. 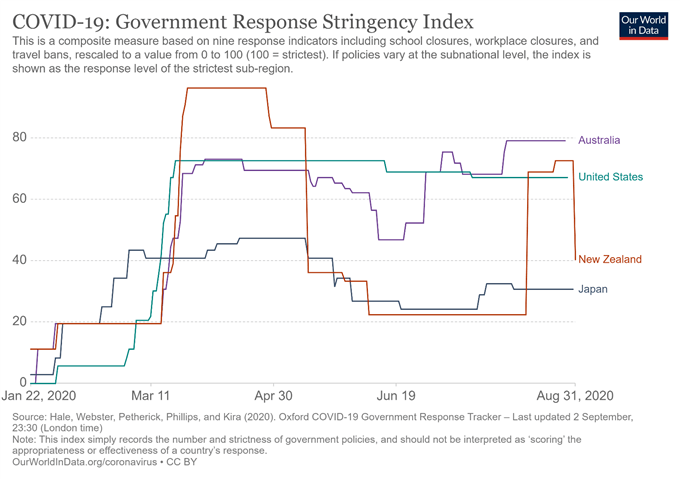 Although level 2 settings remain in place the Oxford Government Response Stringency Index highlights the significance of the government’s decision to scale back restrictive measures, with the composite measure for New Zealand plunging to its lowest levels since early May.

This suggests that the economy may pick up where it left off just over three weeks ago, if the number of infections continues to fall ahead of the government’s review of current restrictions on September 6.

To that end, further easing of restrictions would likely underpin the New Zealand Dollar in the near term and soothe the RBNZ’s concerns that additional monetary stimulus is needed to support the nascent economic recovery. 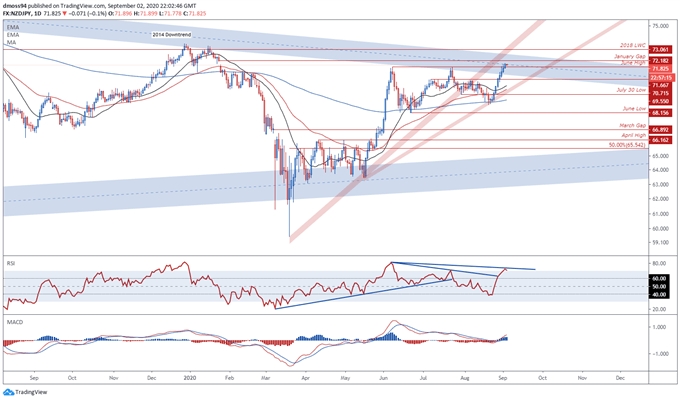 From a technical perspective, the NZD/JPY exchange rate appears to be eyeing a push to test the January high (73.34) after breaking above key resistance at the June high (71.67).

However, bearish RSI divergence could concern NZD bulls as price fails to break above the January breakaway gap (72.18) and psychologically imposing 72.00 mark.

That being said, an extension of the recent 9-day rally from sentiment-defining support at the 200-day moving average looks in the offing, if price remains constructively perched above the June high (71.67). 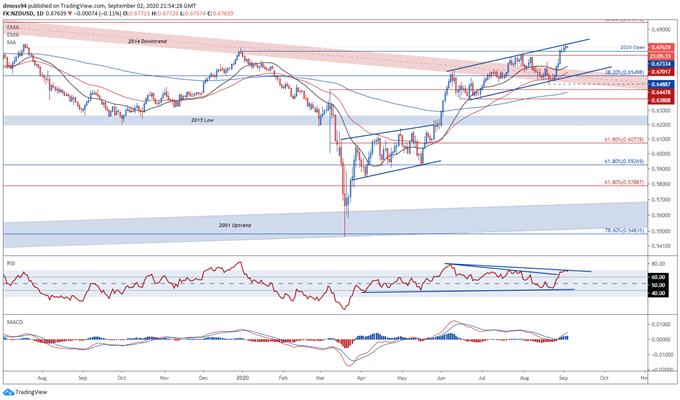 Bearish RSI divergence at the July 2019 high (0.6790) suggests NZD/USD rates may be at risk of a short-term pullback, despite pressing to fresh yearly highs yesterday (0.6789).

Having said that, with price constructively positioned above the 2020 open (0.6733) and continuing to travel within a bullish Ascending Channel, the path of least resistance remains skewed to the upside.

Nevertheless, NZD/USD may slide back towards support at the July high (0.6760) in the coming days, with a break below potentially bringing about a more sustained correction towards the trend-defining 100-day moving average (0.6575) and channel support.

As you know by now, I make a stock purchase every single month no matter what is going on in the world and despite the doom and gloom headlines. Perhaps I am naive or more […]