The difference between all-time market highs that are followed by further gains and all-time highs that turn out to be market tops tends to be the extent to which the highs are reflective of the general appetite for risk. What we currently see is a market that is being driven to new highs by a tiny number of stocks while the majority of stocks are weakening, both in the U.S. and internationally. We are also seeing some upside pressure on implied volatility, signaling a potential shift towards risk aversion.

There are a number of different measures we look at to determine the internal strength of the SPX and the general appetite towards risk. Specifically, the number of SPX components trading above their 200-dma, the number of SPX components trading at new 52-week highs, the share of stocks rising versus declining on a given day, and the performance of the Dow Transports, the performance of equally-weighted SPX, U.S. Small Caps, the MSCI World Ex-U.S., the MSCI World Emerging Markets, the VIX, and high-yield credit spreads. We have seen all of these metrics flash warning signals over recent weeks.

As the chart above shows, the number of warning signals over the past few weeks has exceeded the number seen even at the height of the 2000 bubble peak. We are seeing similar divergences as we saw back then, with the added element of weaker developed market stocks outside the U.S. acting as an additional signal of deteriorating risk appetite. As we saw in the late-1990s, as the market rally has advanced and valuations have become more extreme, gains have been driven by a declining number of stocks while the majority of the market has already begun to show signs of risk aversion.

What is particularly rare about the current market advance is the fact that market breadth is deteriorating rapidly even amid a parabolic rise in the major indices. The following chart shows periods where the SPX is trading at new all-time highs, is in excess of 10% above its 200-dma, and more than 30% of our market breadth indicators are showing warning signals. The past three times this has occurred were at the peak of February this year, the January 2018 peak, and the March 2000 peak. 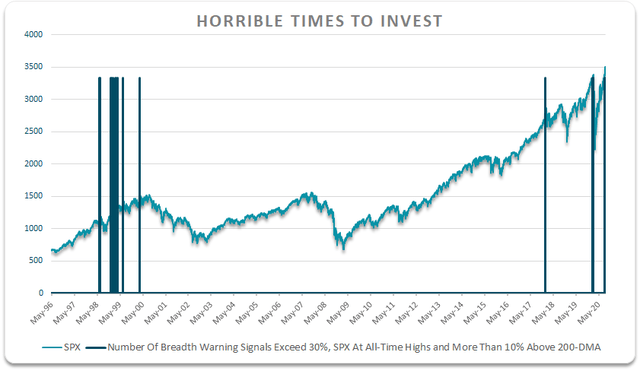 The VIX volatility index has been a very useful indicator of impending market weakness, with the index showing a strong tendency to rise steadily alongside the final stages of a market advance. The sharp rise in the VIX over the past few weeks has left it near its highest level on record for any new all-time high in the SPX. The only time we have seen the VIX higher at a new all-time SPX high was in May 1999, just a few months and a few percent from the market’s 2000 peak.

FAAMG Stocks Are Flying Too Close To The Sun

The deterioration in market breadth explained above reflects the extent to which the SPX is being driven by the FAAMG stocks (Facebook (NASDAQ:FB), Apple (NASDAQ:AAPL), Amazon (NASDAQ:AMZN), Microsoft (NASDAQ:MSFT), and Google (NASDAQ:GOOG) (NASDAQ:GOOGL)). These stocks are now valued at the equivalent of almost 40% of GDP, on par with the entire stock market’s valuation at the March 2009 low. With the bulk of U.S. stocks and risk assets globally showing signs of bull market fatigue, any weakness in these mega-cap tech stocks could result in a major market crash. 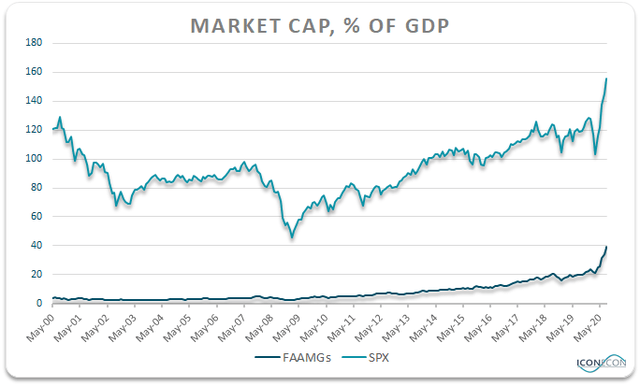 The widespread belief in the ability of low interest rates to prevent a market crash continues to strike us as completely unfounded. The speculative mania we are currently seeing is similar in magnitude to the late-1990s bubble which peaked when real interest rates were over 4%, fully 5 percentage points above current levels. If easy monetary policy is such a supportive factor for stocks as many believe, presumably the 20-year period of easing has provided a great deal of support. The problem now is that further declines in real yields from multi-year lows will be harder to come by, and if they are forthcoming they will likely both reflect and result in stagflation, under which stocks have tended to perform particularly poorly.

Disclosure: I am/we are short SPX. I wrote this article myself, and it expresses my own opinions. I am not receiving compensation for it (other than from Seeking Alpha). I have no business relationship with any company whose stock is mentioned in this article.