The auto parts retailers have been hot for a long time. None have been hotter than O’Reilly (ORLY), which has proven time and again it is the best of the group that also includes Advance Auto Parts (AAP) and AutoZone (AZO), as well as conglomerate Genuine Parts (GPC). O’Reilly has proven to be the best growth story over time, and its margins are exceptional, which has led to a very strong stock. 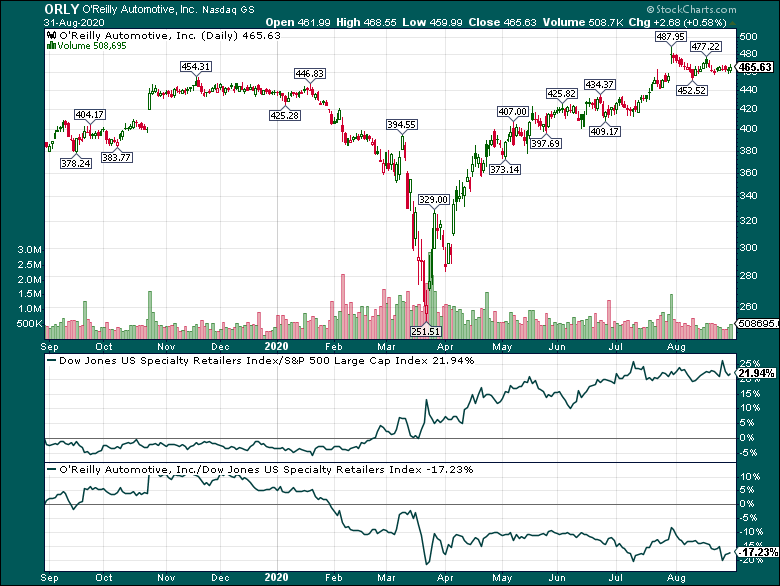 Shares are very near their highs after a huge rally off the bottom in March, but given the way the company has performed, this is no overreaction. Indeed, shares are only marginally higher than they were to start the year, and I still see value in them.

O’Reilly is in the specialty retailers sector, the massive outperformance of which you can see in the middle panel above. The specialty retailers have outperformed the broader market by more than 20% this year, which is enormous. Unfortunately, O’Reilly has trailed its peers and is much closer to simply matching the performance of the S&P 500. I normally eschew stocks with weak relative strength but given the peer group has been so strong, as well as the fundamental factors impacting O’Reilly’s results, I’m making an exception with this one.

Growth on top of growth

O’Reilly has long been the best-performing auto parts retailer, although I haven’t always appreciated it. Indeed, I spent a long time in the past complaining about the stretched valuation, not realizing that buying a great company at a decent price is better than a decent company at a great price. O’Reilly is firmly in the former category.

Revenue has grown very steadily over the years as O’Reilly has added to its store base, and as comparable sales have moved higher over time.

In the period of 2015 to 2019, revenue growth averaged more than 6% in annual gains, fueled by these two tailwinds. Estimates are for a 9% gain this year, although that is projected to be the result of bringing demand forward from 2021, so the forecast gain in the top line for next year is much smaller. We can see this illustrated below with a look at comparable sales. 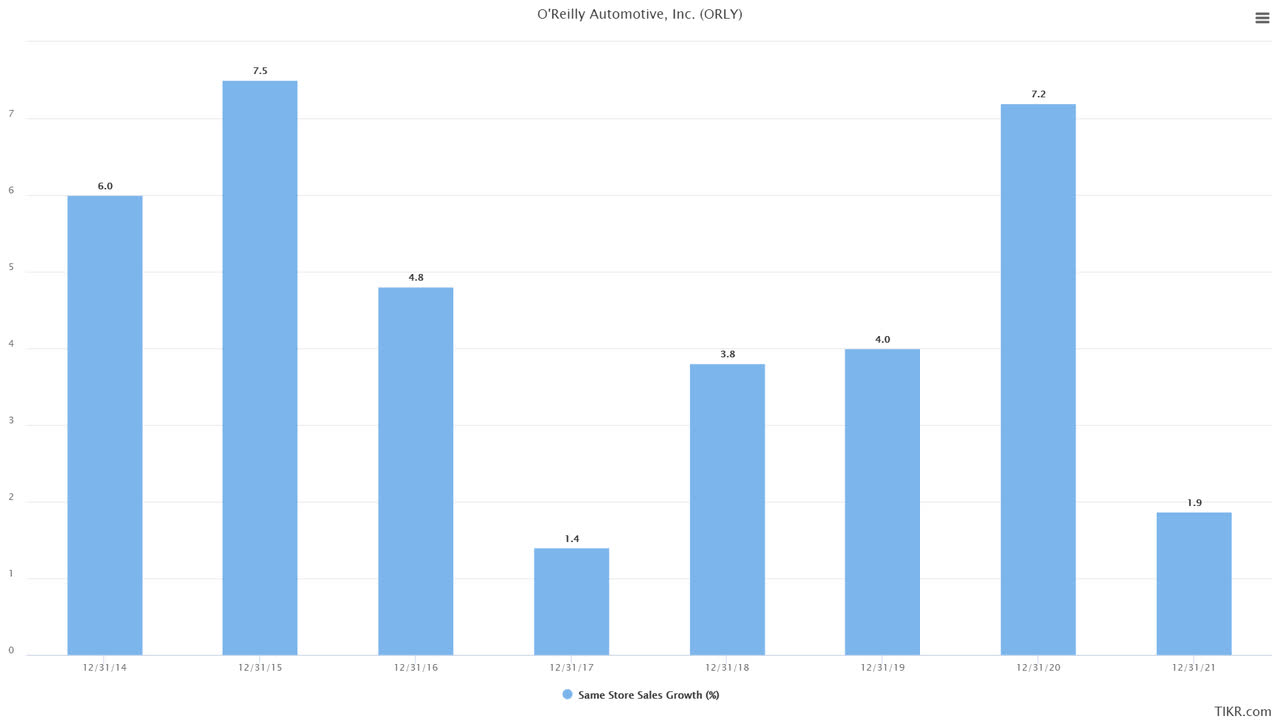 O’Reilly’s history with comparable sales is exemplary, with its worst performance over this period of several years a 1.4% gain in 2017. All other years are +3.8% or better, with that success set to continue this year, which currently has a 7.2% projected gain. Again, demand seems to be pulled forward from next year, as comparable sales are currently slated to rise just 1.9% in 2021. That result would be fine for lesser retailers, but is a bit of a disappointment for O’Reilly.

I would say this company has a way of surprising to the upside, particularly with comparable sales, as it did with its blockbuster Q2 earnings. O’Reilly posted a comparable sales gain of 16.2% in Q2 as it captures DIY market share. This is how O’Reilly has outperformed in the past, and I have little doubt that will continue moving forward.

Speaking of margins, this is really the only source of frustration for me with O’Reilly in terms of growth. 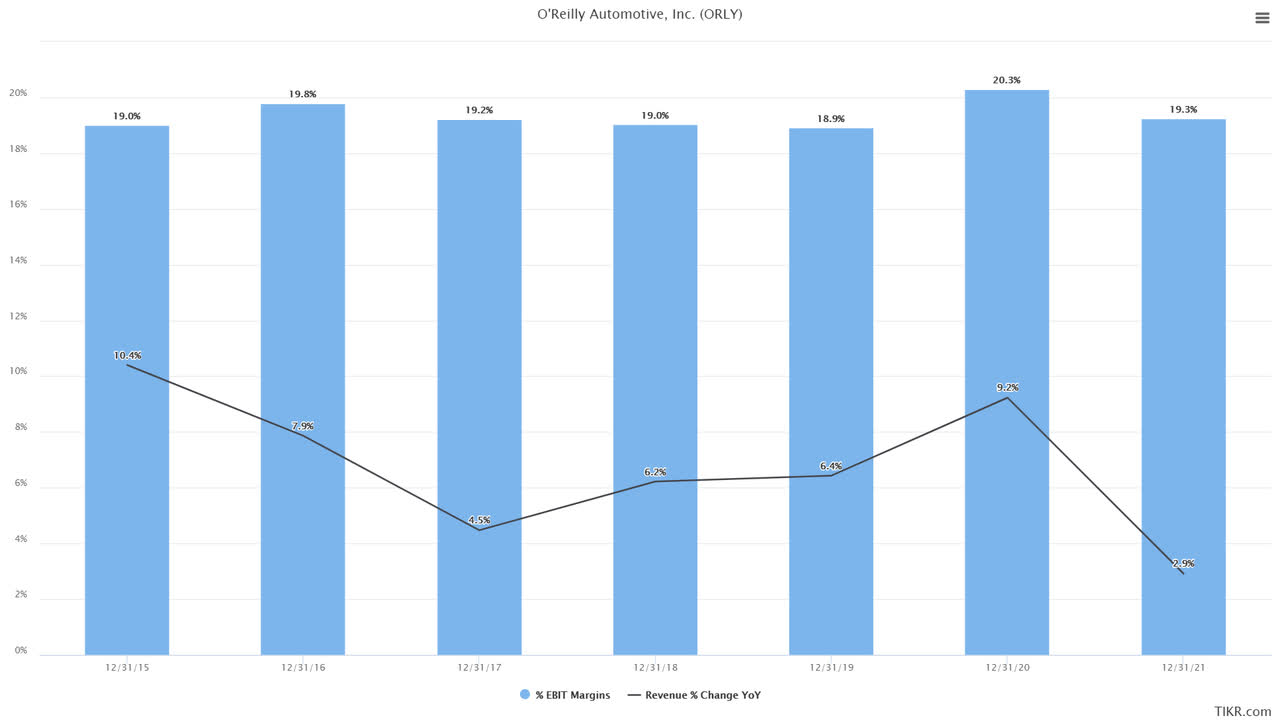 This chart shows the company’s revenue change (black line) and EBIT margins (blue columns) over the past several years, with estimates for this year and next year. One thing you’ll notice is that O’Reilly’s operating margins really never move, although there is a small correlation between revenue growth and EBIT margin change.

Generally, when a retailer produces many years of strong sales growth – as O’Reilly has – there is fixed cost leverage that occurs. That just hasn’t been the case for O’Reilly and it is because its gross margins are largely stagnant, but its SG&A costs tend to rise in line with revenue growth. The end result is what you see above; essentially no profitability growth over time. That makes it more difficult to grow earnings because margin expansion can be a powerful tailwind for earnings growth.

On the plus side, in addition to revenue growth, O’Reilly has been buying back its own stock for a long time, which you can see below. 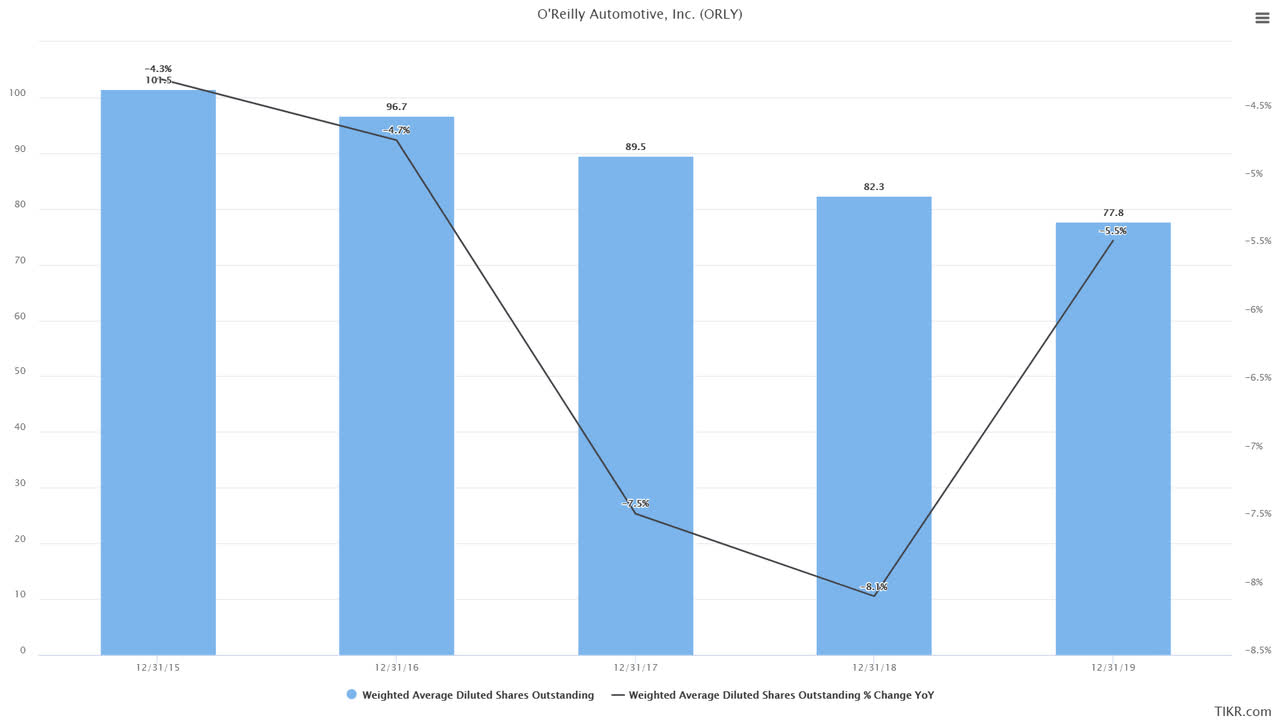 The share count declines each year in meaningful quantities, with declines of more than 4% in each of the five years depicted above. That goes straight to EPS growth by lowering the denominator of that calculation, thereby spreading each dollar of earnings over fewer shares. Given O’Reilly continues to grow revenue, which then grows earnings, and creates free cash flow, this should continue indefinitely.

I mentioned earlier that O’Reilly rarely reaches valuations where you’d consider it to be cheap in the traditional sense. Elite companies with strong operating histories generally never get very cheap because there are buyers that step in to arrest big declines. However, while O’Reilly may not seem that cheap, I think it is fairly priced, and that’s good enough in this case.

That means P/E multiples of 22 and 21.4, respectively for this year and next year. Those aren’t generally what one would consider value multiples, but O’Reilly is best-of-breed and has a very long history of producing steady earnings growth. With huge results already in the bag for the first half of this year, there is no reason to think anything about its long-term prospects is changing.

With shares only marginally higher than they were to start the year, I see O’Reilly as attractive at current levels. Shares are taking a breather following the post-earnings spike, and this period of consolidation is your chance to buy before the next leg higher.

Disclosure: I/we have no positions in any stocks mentioned, but may initiate a long position in ORLY over the next 72 hours. I wrote this article myself, and it expresses my own opinions. I am not receiving compensation for it (other than from Seeking Alpha). I have no business relationship with any company whose stock is mentioned in this article.

© Reuters. Logo of Taiwan Semiconductor Manufacturing Co (TSMC), in Hsinchu TAIPEI (Reuters) – Taiwan’s Ministry of Economic Affairs said on Sunday it has received requests through diplomatic channels to help ease a shortage of […]

USD/MXNFundamental Forecast: Neutral I once again find myself writing to you about USD/MXN at a price level similar to where I last left off. It’s not that price hasn’t moved in these last 7 days, […]