To the everyday consumer, the name Splunk (SPLK) may not mean much, but within enterprise software, Splunk has become a transformational company amassing users in virtually every industry. The machine data company – which essentially processes data generated by a company’s internal systems and transforms them into actionable insights for senior corporate executives – has been growing like a weed despite its scale, and is finding tremendous success in converting its previously license-based software model into the recurring/SaaS subscription business model that investors particularly love at the moment.

Shares of Splunk are already up ~45% year-to-date (though flat after a strong Q2), but I think there’s still plenty of upside in this stock:

I can think of very few software companies that I’m comfortable holding through the long term even as they see tremendous multiples expansion and no longer offer a reasonable value angle. Splunk is one of them, thanks to the sheer size of the market opportunity ahead of it (the company estimated its TAM at $62 billion a year ago) and the speed at which it is growing a recurring business to fill that market. The key points of the bullish thesis that investors should be aware of for Splunk: 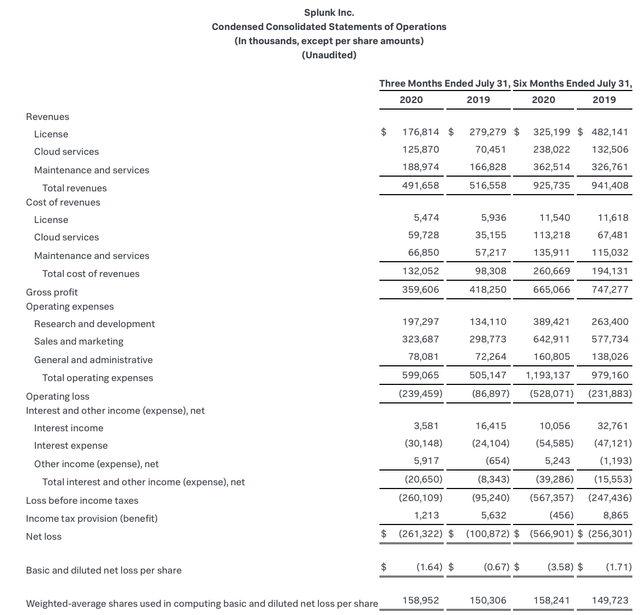 Splunk’s revenue declined -5% y/y to $491.7 million in Q2, missing Wall Street’s expectations of $520.4 million (or flat y/y) in the quarter. However, as seasoned Splunk investors are aware, Splunk’s headline revenue figures form an incomplete story because of the transformational shift to cloud happening underneath. Under the old license-based model, Splunk would recognize a lot of its revenue upfront – but revenue would be lumpier, and over a customer’s lifetime, switching to a recurring or cloud-based model will deliver more overall value. So ironically, the better that Splunk does in the cloud, the more its near-term revenue will suffer.

So the best measure of Splunk’s growth, in my view, is its ARR. ARR in Q2 grew at a stunning 50% y/y pace of $1.93 billion, barely decelerating from Q1’s growth rate in spite of the coronavirus. Heavy backend data projects like Splunk tend to get pushed down the priorities totem pole amid macro uncertainty, but what has ailed many other infrastructure software companies has seemingly not impacted Splunk at all.

The degree of revenue visibility Splunk has with this level of ARR is also impressive. We note that Wall Street analysts for FY22 (next calendar year) have a revenue target of $2.88 billion. At Splunk’s current ARR (never mind the fact that it’s adding ~$150 million in ARR every quarter), 67% of that revenue target is already “locked in” to existing contracts, with any new business providing pure upside. 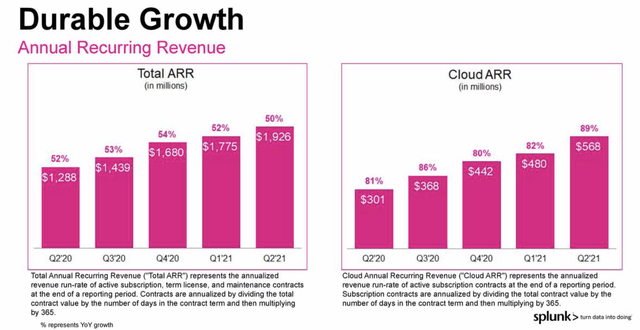 And as can be seen in the chart above, the cloud proportion of that ARR continues to grow at a startup-like pace. Splunk’s 89% y/y growth in Cloud ARR, in fact, accelerated seven points versus 82% y/y growth in Q1. This is the major explanation why Splunk’s Q2 revenue declined, due to the revenue/ARR mix shift toward cloud. The company also noted that cloud products drove more than half of total bookings in Q2 for the first time in the company’s history.

More good news to report: in Q1, due to the onset of the coronavirus, Splunk’s contract durations took a sharp dip – which makes sense, as customers turned cautious on IT spending and opted for shorter contracts to take that uncertainty into account. But in Q2, we note that Splunk’s average cloud contacts have rebounded to ~30 months (2.5 years), up three months from the low point hit in Q1.

And moreover, Splunk’s existing customers continue to upgrade and expand their relationships with the company. Splunk has started reporting dollar-based net retention rates mirroring the metrics used by other SaaS companies, and we’re impressed by the company’s consistent 132% net retention rates that have maintained steadily over the past several quarters (many SaaS companies tend to report figures in the mid-110s). This number indicates that the average Splunk customer is “upsold” to a 32% larger deployment versus the prior year, proving the validity of Splunk’s land-and-expand business model.

Doug Merritt, Splunk’s CEO, offers additional context on the Q2 earnings call which highlights his beliefs that the current pandemic environment is actually helping to accelerate Splunk’s push to cloud:

Our customers are turning to Splunk Cloud faster than ever before, thanks to its rapid time to value, high velocity of innovative features and lower total cost of ownership. The current macro environment is playing a role here too as more and more organizations accelerate their move to cloud-based services in response to the pandemic.

Many of the purchasing trends we saw in Q1, continued or accelerated in Q2. Although some customers remain hesitant to commit to long-term contracts, especially for larger orders, many existing customers continue to expand their use of Splunk as they realize substantial value from current deployments. They drive enhanced ROI as extend to new use cases and the increasing shift to cloud.”

Profitability metrics are slightly less meaningful due to the cloud shift, which has sapped near-term revenue and dropped overall operating margins. What we’d continue to focus on, however, is the fact that Splunk has managed to continue raising its cloud gross margins as it scales, up 620bps in Q1 to 59.2%: 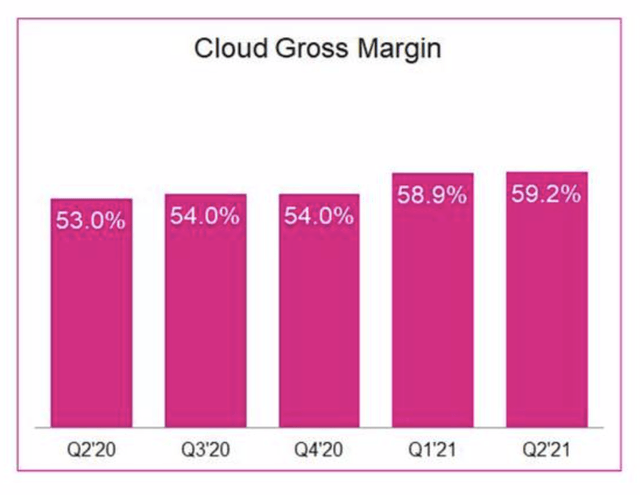 And despite the shortfall in revenue versus Wall Street’s expectations, it may also be worthwhile to note that Splunk’s pro forma EPS of -$0.33 beat Wall Street’s consensus by a penny.

There’s a lot to like about Splunk exiting Q2. The global pandemic has barely impacted Splunk’s fantastic recurring revenue growth and cloud transition, despite bruising many other hardcode backend software infrastructure platforms (Alteryx (AYX) is one of the best examples of a company that has seen its growth utterly wrecked due to the coronavirus). Stay long here as Splunk continues to build the leading cloud-based machine data intelligence platform.

Disclosure: I am/we are long splk. I wrote this article myself, and it expresses my own opinions. I am not receiving compensation for it (other than from Seeking Alpha). I have no business relationship with any company whose stock is mentioned in this article.

US Dollar Index, Federal Reserve, Volatility Index, TED Spread – Talking Points: The Australian ASX 200 index surged 2.42% during Asia-Pacific trade as investor’s priced in a 15bps cut from the RBA at its upcoming […]

Today I continue my series of articles on dividend-oriented ETFs with a piece on WisdomTree U.S. High Dividend Fund (DHS). To begin with, I would like to highlight its low expense ratio of 0.38%, low […]