In a speech entitled – New Economic Challenges and the Fed’s Monetary Policy Review – given on August 27, at the Jackson Hole, Kansas City Federal Reserve Economic Policy Symposium, Federal Reserve Chairman, Jerome Powell announced a change in the emphasis of the dual mandate. The new focus is on promoting full employment even at the expense of price stability.

The policy review was, of course, more nuanced. Past policy decisions were analysed and found wanting – especially the rate increases witnessed between 2015 and 2018. The extraordinary flatness of the Phillips Curve was noted; the lower trend rate of economic growth, contemplated; the stickiness of inflation expectations, contextualised: and the ever-rising, pre-pandemic participation rate, considered. What the speech omitted was any discussion of forward guidance or expectations of the change in size, composition or direction of the Fed’s, already historically large, balance sheet.

For financial markets, the key change is contained in this paragraph:

Our statement emphasizes that our actions to achieve both sides of our dual mandate will be most effective if longer-term inflation expectations remain well anchored at 2 percent. However, if inflation runs below 2 percent following economic downturns but never moves above 2 percent even when the economy is strong, then, over time, inflation will average less than 2 percent. Households and businesses will come to expect this result, meaning that inflation expectations would tend to move below our inflation goal and pull realized inflation down. To prevent this outcome and the adverse dynamics that could ensue, our new statement indicates that we will seek to achieve inflation that averages 2 percent over time. Therefore, following periods when inflation has been running below 2 percent, appropriate monetary policy will likely aim to achieve inflation moderately above 2 percent for some time.

Returning to monetary policy, the Fed announcement was hardly a surprise, the August 10, FRBSF Economic Letter – Average-Inflation Targeting and the Effective Lower Bound had already set the tone. The chart below reveals the Fed’s inflation targeting dilemma: –

If the average for Total PCE over the last decade has been less than 1.5%, allowing it to rise above 3% for a few years is just what is needed for the Fed to get back on track.

Setting aside the vexed questions of whether an Inflation Target is appropriate or, deflation, a good or bad phenomenon, we need to investigate the structural cause of the decline in inflation. Here, I will resort to the monetary equation of exchange:

M is the total nominal amount of money supply in circulation on average in an economy.

V is the velocity of money, or the average frequency with which a unit of money is spent.

P is the price level.

Q is an index of real expenditures for newly-produced goods and services.

The basic problem for the Fed is that, despite their success in expanding money supply (see below):

The velocity of circulation has continued to plummet:

I discussed the rapid expansion of money supply in more detail in a June article for AIER – Global Money Supply Growth and the Great Inflation Getaway:

I suspect, fearful of repeating the mistakes made by the Bank of Japan, that once the inflation genie is finally out of the bottle, central bankers will forsake the hard-learned lessons of the 1970’s and 1980’s and allow inflation to conjure away the fiscal deficits of their governments at the expense of pensioners and other long-term investors.

Of course, consumer price inflation may not return, even with such egregious debasement as we have seen thus far, as Michel Santi suggests in Japan: a sleeping beauty:

A global battle has thus been raging on pretty much since the deflationary episodes of the 2010s in an attempt to relaunch economies by dint of inflation. In this respect, the Japanese experiment, or rather multiple experiments, remains a case study to show that inflation is still proving a difficult spectre to revive.

Santi, points to demographic decline, a trend in which Japan is a world leader, together with, what he considers to be, an irrational fear of debt and deficits, which renders people unwilling to spend. In this scenario, government, corporate, and consumer debt cannot be inflated away and sits like a giant toad atop all the animal spirits that might reignite economic growth. He also alludes to the profound changes in the nature of work – from permanent to temporary, from employed to self-employed, from office based to remote. These changes have rendered the Phillips Curve redundant.

The dual mandate of full employment and price stability has never been so easy for the Federal Reserve to achieve. That, at least, was the case until the global pandemic unknit the fabric of the global market economy. Now, the Federal Reserve – and central bankers in general – are faced with the prospect that printed money, whether it be sterilised or not, will either be invested or hoarded. In this scenario, the greater the debt, the less likely prices are to rise as a result of demand-pull inflation. On the opposite side of the inflation equation, the shortening of global supply chains and the need for dual-redundancy, again another unwelcome and unexpected lockdown, has created the classic bottlenecks which lead to product scarcity, personified in cost-push inflation.

Interest Rates, Global Value Chains, and Bank Reserve Requirements, published in June of last year, notes that Global Value Chains have suffered and shortened since 2009; that, despite low interest rates, financing costs remain too high and yet, at the same time, bank profitability has not recovered from the damage caused by the great financial recession. Nonetheless, those same banks, which were supposed to have been broken up or dramatically deleveraged remain still too big to fail. My conclusion looks dismally prescient:

The logical solution to the problem of the collapse of global value chains is to create an environment in which the credit cycle fluctuates less violently. A gradual normalisation of interest rates is the first step towards redemption. This could be accompanied by the removal of the moral hazard of central bank and government intervention. The reality? The societal pain of such a gargantuan adjustment would be protracted. It would be political suicide for any democratically elected government to commit to such a meaningful rebalancing. The alternative? More of the same. Come the next crisis central banks will intervene, if they fail to avert disaster, governments’ will resort to the fiscal spigot.

US interest rates will converge towards those of Europe and Japan. Higher stock/earnings multiples will be sustainable, leverage will increase, share buy-backs will continue: and the trend rate of economic growth will decline. Economics maybe the dismal science, but this gloomy economic prognosis will be quite marvellous for assets.

According to data from S&P, US share buybacks were lower for the second quarter in a row in Q2 2020. They amounted to $166bln versus $205bln in Q1 and $190bln in Q2 2019 – this is still the seventh highest quarterly amount ever recorded. The chart below shows the evolution of buybacks over the last two decades: 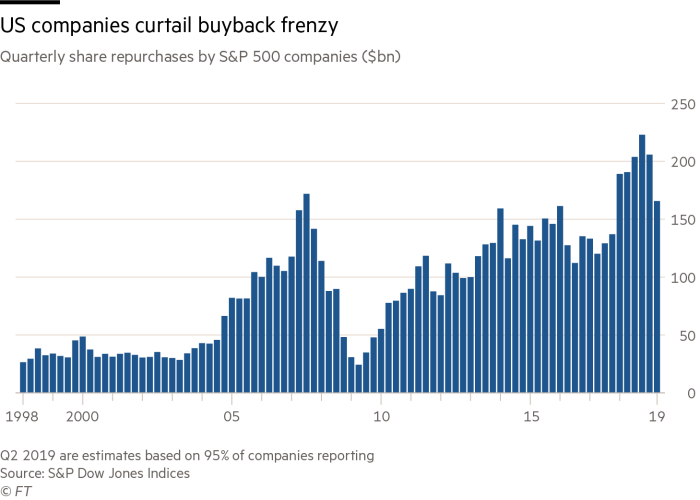 The consolidation of the US equity market continues – from a high of 7,562 on July 31, 1998, the Wilshire 5000 Index list of constituents has shrunk to just 3,473 names. This is a side effect of the fact that debt finance remains cheaper than equity finance. According to a recent article published by the Financial Times – US corporate bond issuance hits $1.919tn in 2020, beating full-year record corporate issuers have raised more capital in the first eight months of 2020 than in any previous full year. Low rates going to no rates, thanks to the actions of the Fed, is said to have driven this step-change in activity. The reticence of commercial banks to extend finance, despite the favourable interest rate and liquidity environment, is a contributing factor: 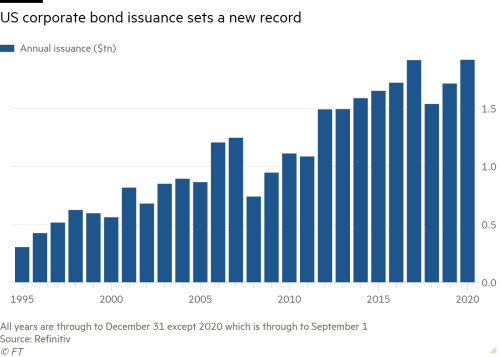 The Covid-19 pandemic has accelerated many of the economic and financial market trends which have been in train since the end of the 2008/2009 financial crisis. Lower interest rates, more quantitative easing, further share buybacks and greater debt issuance – by borrowers’ individual, corporate, and national – look set to continue.

A global economic depression is looming, yet the price of many assets continues to rise. In a similar manner to the Tech bubble of the late 1990s, today’s valuations rely more on the willing suspension of disbelief than on any sober assessment of earnings potential. The US stock market has outperformed partly due to the high proportion of technology stocks, as the chart below (from May) shows: 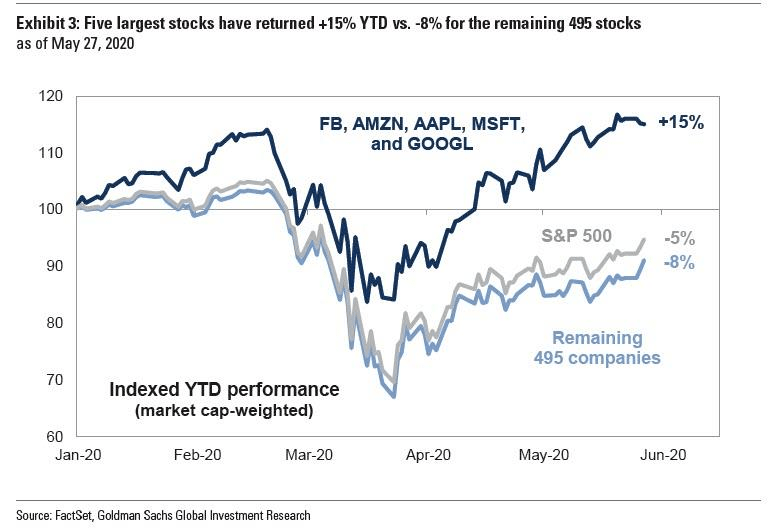 The magnitude of this fiscal and monetary response has already reached far beyond the United States. The table below shows those national stock markets with a positive year to date performance exceeding 5%: 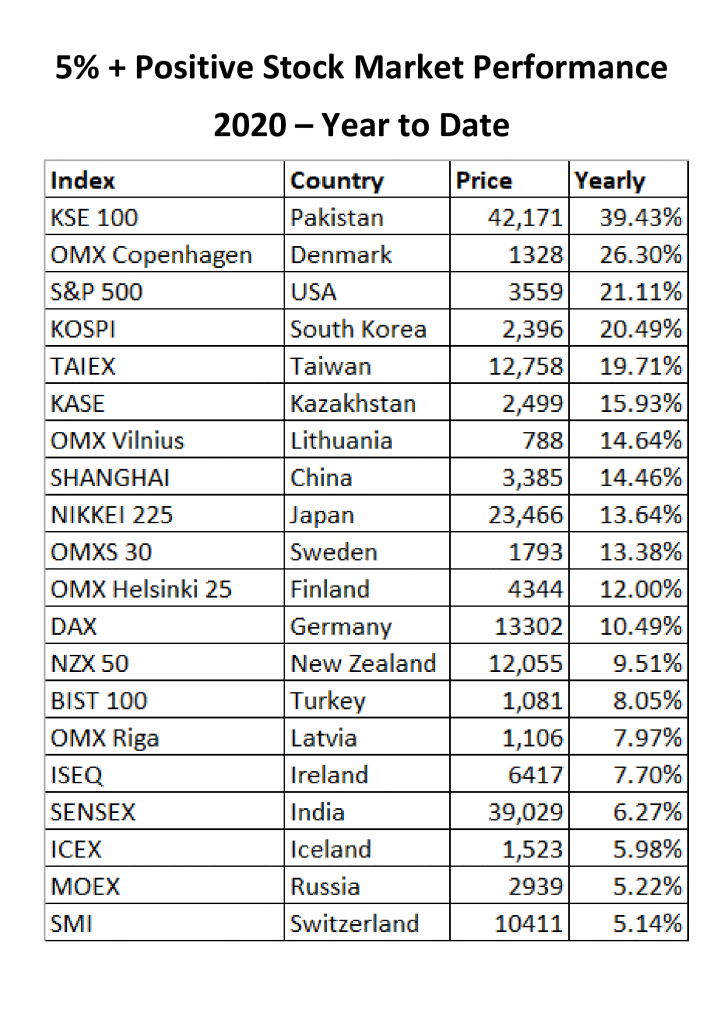 I have deliberately excluded the Nasdaq 100 which is currently up more than 57%. Other countries will catch up. The US$ has weakened since February on a trade weighted basis:

In a competitive race to the bottom, other central banks (and their governments) will expand monetary (and fiscal) policy to stop their currencies appreciating too fast.

Global bond yield convergence will continue, stock market strength will endure. Inflation will creep into consumer prices gradually and the central banks will turn a blind eye until it is too late. The world economy may be on its knees but, in general, asset prices will continue to reach for the stars.

Image source The pandemic has certainly taken its toll on different industries in different ways. One group that was punished severely is restaurants, a sector that was nearly completely shut down for a portion of […]