T-Mobile (TMUS) has had a decent run over the past 52 weeks, with the shares returning 51% since the same time last year. One of the catalysts for this increase has been its strong execution since its merger with Sprint, which propelled it to become the #2 carrier in the U.S., and reduced the number of top wireless carriers from four to three. In this article, I explore the pros and cons of investing in T-Mobile shares today, and evaluate whether this makes an attractive long-term investment; so let’s get started.

A Look Into T-Mobile

After much anticipation, T-Mobile finally closed its merger with Sprint back in April of this year. This came after a settlement with the Department of Justice, in which T-Mobile agreed to divest the Sprint prepaid business and certain spectrum assets to DISH Network (Dish) (DISH), and make available to Dish 20,000 cell sites and hundreds of retail locations. Since the merger, T-Mobile has quickly become the #2 wireless provider in the U.S. with 98.3 million customers, putting it ahead of AT&T (T).

What I like about this merger is that it enables a much faster deployment of multiple high-quality 5G networks for American consumers. Currently, T-Mobile already has America’s largest 5G network, which covers 250 million people over 1.3 million square miles. Management’s intent is to increase its network capacity 14-fold over the next six years, resulting in network speeds that are 15x faster than the current speeds today. This will expand 5G coverage to 99% of Americans, thereby solidifying its reputation as one of the dominant telecommunications providers.

In what I see as a net positive for the telecom industry as a whole, this latest industry consolidation puts T-Mobile and its two large competitors in a better negotiating position with cell tower owners, from which they lease sites. As a near-term benefit for the company, T-Mobile will be able to reduce the number of redundant cell sites, thereby resulting in long-term cost synergies for the company.

T-Mobile is also known for having innovative offerings, such as T-Mobile Money, which provides checking accounts with competitive interest rates. In addition, unlike AT&T (T), it appears that T-Mobile has opted to go with the partnership (versus acquisition) route when it comes to media offerings. This is supported by the Netflix (NFLX) and Quibi streaming deals that it offers its customers through certain wireless plans.

This, combined with a high-quality network, has resulted in T-Mobile expanding its postpaid customer base by 60% over the past five years, while its competitors have posted virtually no growth. I find this track record for customer retention to be key, especially when considering that T-Mobile is inheriting a customer base from Sprint, which is known for having high customer churn rates.

The latest results show encouraging news, as management appears to be executing well with the combined company so far. As seen below, the key metrics are pointing in the right direction, as noted on the company’s Q2 press release:

In addition, the Sprint integration appears to be going well, as management has made solid progress in migrating customers onto the T-Mobile network, as noted on the latest conference call (emphasis added by author):

In fact, as of today, we have already moved more than 10% of this traffic before we’ve even started the customer migration. This is possible, because we now have more than 85% of Sprint postpaid phone base with devices that work on the T-Mobile network, something we made fully available right out of the gate. So now, over 10 million Sprint postpaid customers on average are using the T-Mobile network every single day, plus the Sprint base historically had limited access to VoLTE, voice-over-LTE. But we already have roughly 75% of the Sprint postpaid base now enabled on VoLTE.”

Lastly, T-Mobile now controls 319 MHz of combined low- and mid-band spectrum nationwide, which is more than AT&T and Verizon (VZ) combined. This is a major advantage for the company as it continues its roll-out of 5G, thereby making T-Mobile a powerhouse to contend with.

Turning to analyst estimates, it appears that Wall Street sees further upside for the share price, as the investment community has been impressed by the company’s recent performance. As seen below, the current average price target is $130 per share, which sits comfortably above where the shares are trading at today. 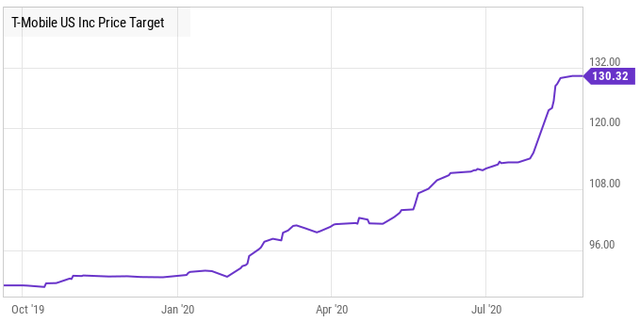 While T-Mobile appears to be executing on all fronts, investors should also be mindful of the risks. For one, the 5G space requires constant investment, and technological evolution could require the company to invest more than it originally planned. The company carries a sizeable $67.5 billion in long-term debt, and unplanned investments could further strain its balance sheet. In addition, increased availability of spectrum can reduce barriers to entry into the wireless space, as evidenced by Comcast’s (CMCSA) and other cable carriers’ low-cost wireless offerings. While this risk is small at the moment, it could make the market more competitive down the line.

Since merging with Sprint, T-Mobile has become one of the top two wireless carriers in the U.S. The company continued its strong track record of performance in its latest quarter, and the merger integration appears to be going well. Going forward, I expect the company to be in an enviable position with its strong 5G offerings.

I see further upside at the current price of $116.88 and a blended P/EBITDA of 6.6. While the shares are not exactly cheap (Verizon has a blended P/EBITDA of 5.2), I find the valuation to be reasonable, with the expectation of strong forward growth. For reference, EBITDA is a commonly reported measure of profitability in the telecommunications industry, due to the capital-intensive nature of the business. 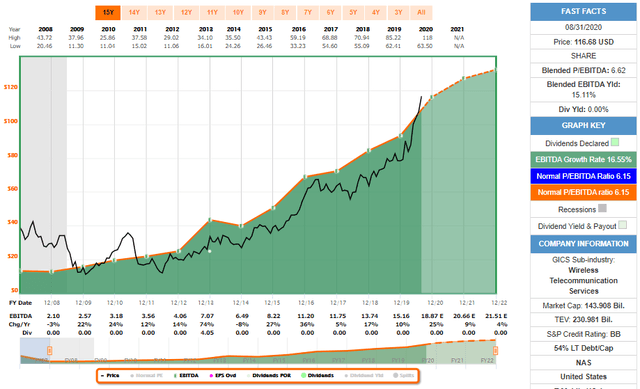 Disclosure: I am/we are long T. I wrote this article myself, and it expresses my own opinions. I am not receiving compensation for it (other than from Seeking Alpha). I have no business relationship with any company whose stock is mentioned in this article.

Looking for companies with a decent growth story has been a bit difficult in this market given that we are trading at new all-time highs. However, I believe Molsoon Coors (NYSE:TAP) presents a pretty compelling […]

Source: Fuelfix Business activity practically ground to a halt after the knock effects of the coronavirus materialized in February. Shelter-in-place orders led to millions of Americans being stuck at home. Oil prices plummeted and Q2 […]